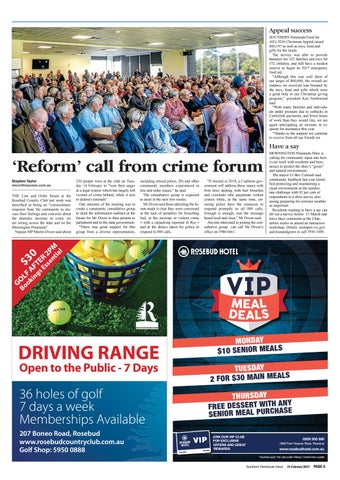 Appeal success SOUTHERN Peninsula Food for All’s 2016 Christmas Appeal raised $40,197 as well as toys, food and gifts for the needy. The service was able to provide hampers for 522 families and toys for 572 children, and still have a modest reserve to begin its 2017 emergency food aid. “Although this was well short of our target of $60,000, the overall assistance we received was boosted by the toys, food and gifts which were a great help in our Christmas giving program,” president Ken Northwood said. “With many families and individuals under pressure due to cutbacks in Centrelink payments, and fewer hours of work than they would like, we are again anticipating an increase in requests for assistance this year. “Thanks to the support we continue to receive from all our friends we

‘Reform’ call from crime forum Stephen Taylor steve@mpnews.com.au THE Law and Order forum at the Rosebud Country Club last week was described as being an “extraordinary response from the community to discuss their feelings and concerns about the dramatic increase in crime we are seeing across the state and on the Mornington Peninsula”. Nepean MP Martin Dixon said about

250 people were at the club on Tuesday 14 February to “vent their anger at a legal system which has largely left victims of crime behind, while it acts to defend criminals”. One outcome of the meeting was to create a community consultative group to distil the information outlined at the forum for Mr Dixon to then present to parliament and to the state government. “There was great support for this group from a diverse representation,

including retired police, JPs and other community members experienced in law and order issues,” he said. The consultative group is expected to meet in the next few weeks. Mr Dixon said those attending the forum made it clear they were concerned at the lack of penalties for breaching bail, at the increase in violent crime – with a carjacking reported in Rye – and at the delays taken for police to respond to 000 calls.

“If elected in 2018, a Coalition government will address these issues with firm laws dealing with bail breaches and criminals who perpetrate violent crimes while, at the same time, ensuring police have the resources to respond promptly to all 000 calls. Enough is enough, was the message heard loud and clear,” Mr Dixon said. Anyone interested in joining the consultative group can call Mr Dixon’s office on 5986 6661.

MORNINGTON Peninsula Shire is calling for community input into how it can work with residents and businesses to protect the shire’s “green” and natural environment. The mayor Cr Bev Colomb said community feedback last year identified protecting and maintaining a clean environment as the number one challenge with 92 per cent of respondents to a shire survey also seeing preparing for extreme weather as important. Residents wanting to have a say can fill out a survey before 21 March and leave their comments at the Chatterbox trailer or attend an interactive workshop. Details: mornpen.vic.gov. au/cleanandgreen or call 5950 1000.

JOIN OUR VIP CLUB FOR EXCLUSIVE OFFERS AND GREAT REWARDS