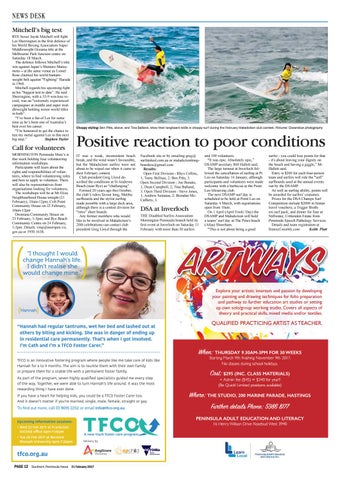 Call for volunteers MORNINGTON Peninsula Shireâ&#x20AC;&#x2122;s is this week holding four volunteering information workshops. Participants will learn about the rights and responsibilities of volunteers, where to find volunteering roles and how to apply to volunteer. There will also be representatives from organisations looking for volunteers. The workshops will be at Mt Eliza Neighbourhood House tonight (21 February), 10am-12pm; Crib Point Community House on 22 February, 10am-12pm Dromana Community House on 23 February, 1-3pm; and Rye Beach Community Centre on 24 February, 1-3pm. Details: vmp@mornpen.vic. gov.au or 5950 1638.

Positive reaction to poor conditions IT was a weak, inconsistent beach break, and the wind wasnâ&#x20AC;&#x2122;t favourable, but the Maladiction surfers were not about to be wiped out when it came to their February contest. Club president Greg Lloyd described the conditions at St Andrews Beach (near Rye) as â&#x20AC;&#x153;challengingâ&#x20AC;?. Formed 20 years ago this October, the clubâ&#x20AC;&#x2122;s riders favour long, Malibu surfboards and the stylist surfing made possible with a large deck area, although there is a contest division for â&#x20AC;&#x153;retroâ&#x20AC;? short boards. Any former members who would like to be involved in Maladictionâ&#x20AC;&#x2122;s 20th celebrations can contact club president Greg Lloyd through the

and 100 volunteers. â&#x20AC;&#x153;It was epic. Absolutely epic,â&#x20AC;? DSAMP secretary Bill Hallett said. The large turnout at Inverloch followed the cancellation of surfing at Pt Leo on Saturday 14 January, although participants and volunteers were made welcome with a barbecue at the Point Leo lifesaving club. The next DSAMP surf day is scheduled to be held at Point Leo on Saturday 4 March, with registrations open from 10am. On 1 April (April Foolsâ&#x20AC;&#x2122; Day) the DSAMP and Maladiction will hold a teamsâ&#x20AC;&#x2122; surf day at The Pines beach (Atlas) Shoreham. â&#x20AC;&#x153;This is not about being a good

surfer - you could lose points for that - it's about leaving your dignity on the beach and having a giggle,â&#x20AC;? Mr Hallett said. Entry is $200 for each four-person team and surfers will ride the â&#x20AC;&#x153;softâ&#x20AC;? surfboards used at the annual events run by the DSAMP. As well as surfing ability, points will be awarded for surfersâ&#x20AC;&#x2122; costumes. Prizes for the DSA Champs Surf Competition include $2000 in Jetstar travel vouchers; a Trigger Brothers surf pack; and dinner for four at Stillwater, Crittenden Estate from Peninsula Speech Pathology Services. Details and team registration at firstreef.weebly.com Keith Platt

Explore your artistic interests and passion by developing your painting and drawing techniques for folio preparation and pathway to further education art studies or setting up own solo/group working studio. Covers all aspects of theory and practical skills, mixed media and/or textiles.