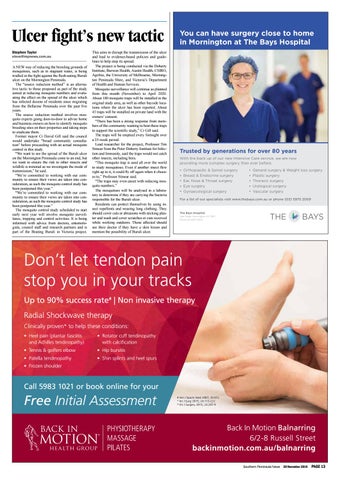 This aims to disrupt the transmission of the ulcer and lead to evidence-based policies and guidelines to help stop its spread. The project is being conducted via the Doherty Institute, Barwon Health, Austin Health, CSIRO, Agribio, the University of Melbourne, Mornington Peninsula Shire, and Victoria’s Department of Health and Human Services. Mosquito surveillance will continue as planned from this month (November) to April 2020. About 180 mosquito traps will be installed in the original study area, as well as other bayside locations where the ulcer has been reported. About 45 traps will be installed on private land with the owners’ consent. “There has been a strong response from members of the community wanting to host these traps to support the scientific study,” Cr Gill said. The traps will be emptied every fortnight over a 25-week period. Lead researcher for the project, Professor Tim Stinear from the Peter Doherty Institute for Infection and Immunity, said the traps would not catch other insects, including bees. “This mosquito trap is used all over the world to study mosquitoes. Even if another insect flew right up to it, it could fly off again when it chooses to,” Professor Stinear said. “The traps may even assist with reducing mosquito numbers.” The mosquitoes will be analysed in a laboratory to determine if they are carrying the bacteria responsible for the Buruli ulcer. Residents can protect themselves by using insect repellents and wearing long clothing. They should cover cuts or abrasions with sticking plaster and wash and cover scratches or cuts received while working outdoors. Those affected should see their doctor if they have a skin lesion and mention the possibility of Buruli ulcer.