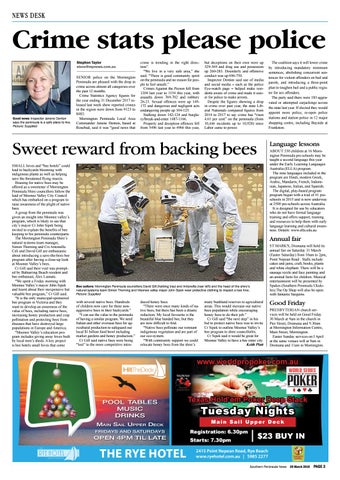 SENIOR police on the Mornington Peninsula are pleased with the drop in crime across almost all categories over the past 12 months. Crime Statistics Agency figures for the year ending 31 December 2017 released last week show reported crimes in the region were down from 9123 to 8483. Mornington Peninsula Local Area Commander Janene Denton, based at Rosebud, said it was “good news that

but deceptions on their own were up 329-369 and drug use and possession up 260-283. Disorderly and offensive conduct was up 696-750. Inspector Denton said use of media and social media – such as the police Eye-watch page – helped make residents aware of crime and made it easier for police to make arrests. Despite the figures showing a drop in crime over past year, the state Liberal Nationals compared figures from 2014 to 2017 to say crime has “risen 4.61 per cent” on the peninsula (from 10,446 incidents up to 10,928) since Labor came to power.

Sweet reward from backing bees SMALL hives and “bee hotels” could lead to backyards blooming with indigenous plants as well as helping save the threatened flying insects. Housing for native bees may be offered as a sweetener if Mornington Peninsula Shire councillors follow the lead of Moonee Valley City Council which has embarked on a program to raise awareness of the plight of native bees. A group from the peninsula was given an insight into Moonee valley’s program, which is likely to see that city’s mayor Cr John Sipek being invited to explain the benefits of bee keeping to his peninsula counterparts. The Mornington Peninsula Shire’s natural systems team manager, Simon Thorning and Crs Antonella Celi and David Gill are enthusiastic about introducing a save-the-bees bee program after having a close-up look at Moonee Valley’s bees. Cr Gill said their visit was prompted by Balnarring Beach resident and bee enthusiast, Alex Lusnats. “We spent a Friday morning with Moonee Valley’s mayor John Sipek and learnt about their inexpensive but valuable bee program,” Cr Gill said. “It is the only municipal-sponsored bee program in Victoria and they want to develop an awareness of the value of bees, including native bees, increasing honey production and crop pollination and protecting bees from diseases that have destroyed large populations in Europe and America. “Moonee Valley’s education program includes giving away hives built by local men’s sheds. A key project is bee hotels small hives that come

The coalition says it will lower crime by introducing mandatory minimum sentences, abolishing concurrent sentences for violent offenders on bail and parole, and introducing a three-point plan to toughen bail and a public register for sex offenders. The party said there were 183 aggravated or attempted carjackings across the state last year. If elected they would appoint more police, re-open police stations and station police in 12 major shopping centre, including Bayside at Frankston.

Language lessons ABOUT 550 children at 16 Mornington Peninsula pre-schools may be taught a second language this year under the Early Learning Languages Australia (ELLA) program. The nine languages included in the program are Hindi, modern Greek, Arabic, Mandarin, French, Indonesian, Japanese, Italian, and Spanish. The digital, play-based program program began with a trial of 41 preschools in 2015 and is now underway at 2500 pre-schools across Australia. It is designed for use by educators who do not have formal language training and offers support, training and resources to help them with early language learning and cultural awareness. Details: www.ella.edu.au.

Annual fair ST MARK'S, Dromana will hold its annual fair on Saturday 31 March (Easter Saturday) from 10am to 2pm, Point Nepean Road . Stalls include cakes and jams, craft, books, plants and white elephant. There will be a sausage sizzle and face painting and an animal farm for children. Musical entertainment will be presented by Spukes (Southern Peninsula Ukuleles).The Op Shop will also be open with fantastic bargains.

with several native bees. Hundreds of children now care for these nonaggressive bees in their backyards.” “I can see the value to the peninsula of having a similar program. We need Italian and other overseas bees for agricultural production to safeguard our local $1 billion food bowl including market gardens and honey production.” Cr Gill said native bees were being “lost” to the more competitive intro-

duced honey bees. “There were once many kinds of native bees, but there has been a drastic reduction. My local favourite is the beautiful blue banded bee, but they are now difficult to find. “Native bees pollinate our remnant indigenous vegetation and are part of our eco-system. “With community support we could relocate honey bees from the shire’s

many bushland reserves to agricultural areas. This would increase our native bees population while encouraging honey bees to do their job.” Cr Gill said “the next step” in his bid to protect native bees was to invite Cr Sipek to outline Moonee Valley’s bee program to shire councillo0rs. Cr Sipek said it would be great for Moonee Valley to have a bee sister city. Keith Platt

Good Friday PRESBYTERIAN church services will be held on Good Friday 30 March at 9am in the church in Pier Street, Dromana and 9.30am at Mornington Information Centre, Main Street, Mornington. Easter Sunday services on I April at the same venues will at 9am in Dromana and 11am in Mornington.