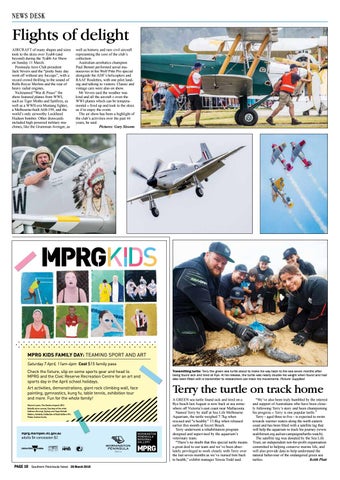 Flights of delight AIRCRAFT of many shapes and sizes took to the skies over Tyabb (and beyond) during the Tyabb Air Show on Sunday 11 March. Peninsula Aero Club president Jack Vevers said the “pretty busy day went off without any hiccups”, with a record crowd thrilling to the sound of Rolls Royce Merlins and the roar of heavy radial engines. Nicknamed “War & Peace” the show featured planes from WWI, such as Tiger Moths and Spitfires, as well as a WWII-era Mustang fighter, a Melbourne-built A68-199, and the world’s only airworthy Lockheed Hudson bomber. Other drawcards included high powered military machines, like the Grumman Avenger, as

well as historic and rare civil aircraft representing the core of the club’s collection. Australian aerobatics champion Paul Bennet performed aerial manoeuvres in his Wolf Pitts Pro special alongside the ADF’s helicopters and RAAF Roulettes, with one pilot landing and talking to visitors. Classic and vintage cars were also on show. Mr Vevers said the weather was kind and all the aircraft – even the WWI planes which can be temperamental – fired up and took to the skies as if to enjoy the event. The air show has been a highlight of the club’s activities over the past 44 years, he said. Pictures: Gary Sissons

Transmitting turtle: Terry the green sea turtle about to make his way back to the sea seven months after being found sick and tired at Rye. At his release, the turtle was nearly double his weight when found and had also been fitted with a transmitter to researchers can track his movements. Picture: Supplied

Terry the turtle on track home A GREEN sea turtle found sick and tired on a Rye beach last August is now back at sea somewhere off Victoria’s east coast near Mallacoota. Named Terry by staff at Sea Life Melbourne Aquarium, the turtle weighed 7.7kg when rescued and “a healthy” 15.8kg when released earlier this month at Secret Beach. Terry underwent a rehabilitation program designed and supervised by the aquarium’s veterinary team. “There’s no doubt that this special turtle means a great deal to our team and we’ve been absolutely privileged to work closely with Terry over the last seven months as we’ve nursed him back to health,” exhibit manager Tereza Todd said.

“We’ve also been truly humbled by the interest and support of Australians who have been closely following Terry’s story and been championing his progress – Terry is one popular turtle.” Terry - aged three to five - is expected to swim towards warmer waters along the north eastern coast and has been fitted with a satellite tag that will help the aquarium to track his journey (www. sealifetrust.org.au/our-campaigns/turtle-watch). The satellite tag was donated by the Sea Life Trust, an independent not-for-profit organisation committed to helping conserve marine life, and will also provide data to help understand the natural behaviour of the endangered green sea turtles. Keith Platt