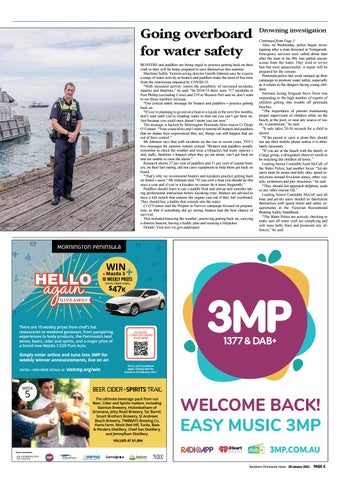 Going overboard for water safety BOATERS and paddlers are being urged to practice getting back on their craft so they will be better prepared to save themselves this summer. Maritime Safety Victoria acting director Gareth Johnson says he expects a surge of water activity as boaters and paddlers make the most of free time from the restrictions imposed by COVID-19. “With increased activity comes the possibility of increased incidents, injuries and fatalities,” he said. “In 2018-19 there were 717 incidents in Port Phillip (excluding Corio) and 219 in Western Port and we don’t want to see those numbers increase. “Our critical safety message for boaters and paddlers – practice getting back on. “If you’re planning to go out on a boat or a kayak in the next few months, don’t wait until you’re treading water to find out you can’t get back on. Just because you could once doesn’t mean you can now.” The message is backed by Mornington Peninsula Shire mayor Cr Despi O’Connor: “Your councillors and l want to remind all boaters and paddlers that no matter how experienced they are, things can still happen that are out of their control.” Mr Johnson says that with incidents on the rise in recent years, TSV’s five messages for summer remain critical. “Boaters and paddlers usually remember to check the weather and wear a lifejacket, but many injuries – and, sadly, fatalities – happen when they go out alone, can’t get back on and are unable to raise the alarm.” Research shows 37 per cent of paddlers and 31 per cent of coastal boaters, on their last outing, did not carry equipment to help them get back on board. “That’s why we recommend boaters and kayakers practice getting back on board – soon,” Mr Johnson said. “If you own a boat you should do this once a year and if you’re a kayaker or canoer do it more frequently.” Paddlers should learn to use a paddle float and stirrup and consider taking professional instruction before kayaking trips. Boaters are advised to have a kill switch that ensures the engine cuts out if they fall overboard. They should buy a ladder that extends into the water. Cr O’Connor said the Prepare to Survive campaign focused on preparation, so that if something did go wrong, boaters had the best chance of survival. This included knowing the weather; practicing getting back on; carrying a distress beacon; having a buddy plan and wearing a lifejacket. Details: Visit msv.vic.gov.au/prepare

Drowning investigation Continued from Page 3 Also, on Wednesday, police began investigating after a man drowned at Tootgarook. Emergency services were called about 4pm after the man in his 80s was pulled unconscious from the water. They tried to revive him but were unsuccessful. A report will be prepared for the coroner. Peninsula police last week ramped up their campaign to promote water safety, especially as it relates to the dangers facing young children. Sorrento Acting Sergeant Steve Drew was responding to the high number of reports of children getting into trouble off peninsula beaches. “The importance of parents maintaining proper supervision of children while on the beach, at the pool, or near any source of water, is paramount,” he said. “It only takes 20-30 seconds for a child to drown. “If the parent or carer is alone they should not use their mobile phone unless it is absolutely necessary. “If you are at the beach with the family or a large group, a designated observer needs to be watching the children all times.” Leading Senior Constable Scott McCall, of the Water Police, had another focus: “Jet-ski users must be aware and fully obey speed restrictions around five-knot zones, other vessels, swimmers and pier structures,” he said. “They should not approach dolphins, seals or any other marine life.” Leading Senior Constable McCall said all boat and jet-ski users needed to familiarise themselves with speed limits and safety requirements in the Victorian Recreational Boating Safety Handbook. “The Water Police are actively checking to make sure all water craft are complying and will issue hefty fines and prosecute any offences,” he said.

There are 10 weekly prizes from chef’s hat restaurants to weekend getaways, from pampering experiences to body products, the Peninsula’s best wines, beers, cider and spirits, and a major prize of a brand new Mazda 3 G20 Pure Auto.

Terms and Conditions apply. Closing date for entries is 25 February 2021.