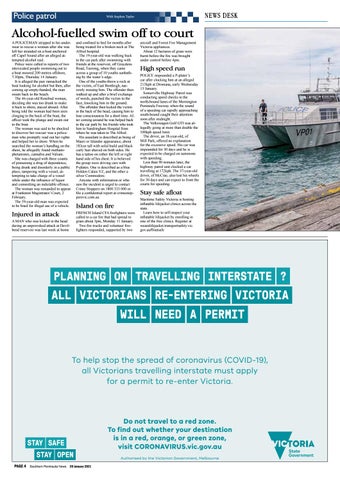 Alcohol-fuelled swim off to court

A POLICEMAN stripped to his underwear to rescue a woman after she was left her stranded on a boat anchored off Capel Sound after an alleged attempted alcohol raid. Police were called to reports of two intoxicated people swimming out to a boat moored 200 metres offshore, 7.30pm, Thursday 14 January. It is alleged the pair ransacked the boat looking for alcohol but then, after coming up empty-handed, the man swam back to the beach. The 46-year-old Rosebud woman, deciding she was too drunk to make it back to shore, stayed aboard. After being told the woman had been seen clinging to the back of the boat, the officer took the plunge and swam out to the boat. The woman was said to be shocked to discover her rescuer was a policeman who promptly read out her rights and helped her to shore. When he searched the woman’s handbag on the shore, he allegedly found methamphetamines, cannabis and Valium. She was charged with three counts of possessing a drug of dependence, being drunk and disorderly in a public place, tampering with a vessel, attempting to take charge of a vessel while under the influence of liquor and committing an indictable offence. The woman was remanded to appear at Frankston Magistrates’ Court, 2 February. The 59-year-old man was expected to be fined for illegal use of a vehicle.

and confined to bed for months after being treated for a broken neck at The Alfred hospital. The 19-year-old was walking back to the car park after swimming with friends at the reservoir, off Graydens Road, Tuerong, when they came across a group of 10 youths sunbathing by the water’s edge. One of the youths threw a rock at the victim, of East Bentleigh, narrowly missing him. The offender then walked up and after a brief exchange of words, punched the victim to the face, knocking him to the ground. The offender then kicked the victim in the back of the head, causing him to lose consciousness for a short time. After coming around he was helped back to the car park by his friends who took him to Sandringham Hospital from where he was taken to The Alfred. His assailant is described as being of Maori or Islander appearance, about 183cm tall with solid build and black curly hair shaved on both sides. He has a tattoo on either the left or right hand side of his chest. It is believed the group were driving cars with P-plates. One is described as a blue Holden Calais VZ, and the other a silver Commodore. Anyone with information or who saw the incident is urged to contact Crime Stoppers on 1800 333 000 or file a confidential report at crimestoppersvic.com.au

Island on fire FRENCH Island CFA firefighters were called to a car fire that had spread to grass about 3pm, Monday 11 January. Two fire trucks and volunteer firefighters responded, supported by two

aircraft and Forest Fire Management Victoria appliances. About 12 hectares of grass were burnt before the fire was brought under control before 4pm.

High speed run POLICE impounded a P-plater’s car after clocking him at an alleged 215kph at Dromana, early Wednesday 13 January. Somerville Highway Patrol was conducting speed checks in the north-bound lanes of the Mornington Peninsula Freeway when the sound of a speeding car rapidly approaching south-bound caught their attention soon after midnight. The Volkswagen Golf GTI was allegedly going at more than double the 100kph speed limit. The driver, an 18-year-old, of Mill Park, offered no explanation for the excessive speed. His car was impounded for 30 days and he is expected to be charged on summons with speeding. Less than 90 minutes later, the highway patrol unit clocked a car travelling at 172kph. The 37-year-old driver, of McCrae, also lost his wheels for 30 days and can expect to front the courts for speeding.

ALL VICTORIANS RE-ENTERING VICTORIA WILL NEED A PERMIT

To help stop the spread of coronavirus (COVID-19), all Victorians travelling interstate must apply for a permit to re-enter Victoria.

Do not travel to a red zone. To find out whether your destination is in a red, orange, or green zone, visit CORONAVIRUS.vic.gov.au Authorised by the Victorian Government, Melbourne