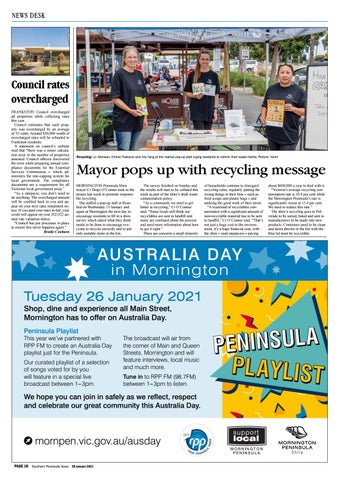 Council rates overcharged FRANKSTON Council overcharged all properties while collecting rates this year. Council estimates that each property was overcharged by an average of 53 cents. Around $30,000 worth of overcharged rates will be refunded to Frankston residents. A statement on council’s website read that “there was a minor calculation error in the number of properties assessed. Council officers discovered the error while preparing annual compliance documents for the Essential Services Commission – which administers the rate-capping system for local government. The compliance documents are a requirement for all Victorian local government areas.” “As a ratepayer, you don’t need to do anything. The overcharged amount will be credited back to you and appear on your next rates instalment notice. If you paid your rates in full, your credit will appear on your 2021/22 annual rate valuation notice. “Council has put processes in place to ensure this never happens again.” Brodie Cowburn

Mayor pops up with recycling message MORNINGTON Peninsula Shire mayor Cr Despi O’Connor took to the streets last week to promote responsible recycling. She staffed a pop-up stall at Rosebud on Wednesday 13 January and again at Mornington the next day to encourage residents to fill in a shire survey which asked what they think needs to be done to encourage everyone to recycle correctly and to put only suitable items in the bin.

The survey finished on Sunday and the results will start to be collated this week as part of the shire’s draft waste contamination policy. “As a community we need to get better at recycling,” Cr O’Connor said. “Some locals still think our recyclables are sent to landfill and many are confused about the process and need more information about how to get it right.” There are concerns a small minority

of households continue to disregard recycling rules, regularly putting the wrong things in their bins – such as food scraps and plastic bags – and undoing the good work of their street. “A truckload of recyclables contaminated with a significant amount of non-recyclable material has to be sent to landfill,” Cr O’Connor said. “That’s not just a huge cost to the environment, it’s a huge financial cost, with the shire – read ratepayers – paying

in Mornington Tuesday 26 January 2021 Shop, dine and experience all Main Street, Mornington has to offer on Australia Day. Peninsula Playlist

This year we’ve partnered with RPP FM to create an Australia Day playlist just for the Peninsula. Our curated playlist of a selection of songs voted for by you will feature in a special live broadcast between 1– 3pm.

The broadcast will air from the corner of Main and Queen Streets, Mornington and will feature interviews, local music and much more. Tune in to RPP FM (98.7FM) between 1– 3pm to listen.

We hope you can join in safely as we reflect, respect and celebrate our great community this Australia Day.

about $600,000 a year to deal with it. “Victoria’s average recycling contamination rate is 10.4 per cent while the Mornington Peninsula’s rate is significantly worse at 15.4 per cent. We need to reduce this rate.” The shire’s recycling goes to Polytrade to be sorted, baled and sent to manufacturers to be made into new products. Containers need to be clean and items thrown in the bin with the blue lid must be recyclable.