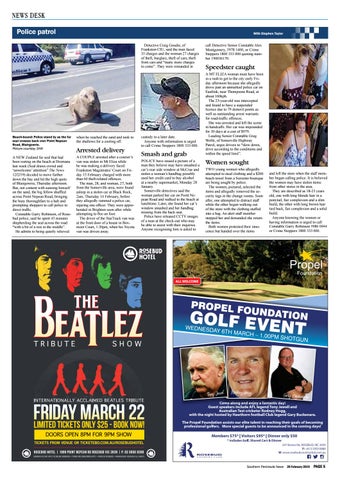 Police give seal of approval

when he reached the sand and took to the shallows for a cooling off.

A NEW Zealand fur seal that had been resting on the beach at Dromana last week (Seal draws crowd and ‘unwelcome’ attention” The News 12/2/19) decided to move further down the bay and hit the high spots of Blairgowrie, Thursday afternoon. But, not content with sunning himself on the sand, the big fellow shuffled across Point Nepean Road, bringing the busy thoroughfare to a halt and prompting shoppers to call police to direct traffic. Constable Garry Robinson, of Rosebud police, said he spent 45 minutes shepherding the seal across the road “with a bit of a rest in the middle”. He admits to being quietly relieved

A COUPLE arrested after a courier’s van was stolen in Mt Eliza while he was making a delivery faced Frankston Magistrates’ Court on Friday 15 February charged with more than 60 theft-related offences. The man, 28, and woman, 27, both from the Somerville area, were found asleep in a stolen car at Black Rock, 2am, Thursday 14 February, before they allegedly rammed a police car, injuring one officer. They were apprehended in Brighton soon after while attempting to flee on foot. The driver of the StarTrack van was at the front door of a house in Boxmoor Court, 1.30pm, when his Toyota van was driven away.

Detective Craig Goudie, of Frankston CIU, said the man faced 35 charges and the woman 27 charges of theft, burglary, theft of cars, theft from cars and “many more charges to come”. They were remanded in

custody to a later date. Anyone with information is urged to call Crime Stoppers 1800 333 000.

Smash and grab POLICE have issued a picture of a man they believe may have smashed a car’s rear side window at McCrae and stolen a woman’s handbag possibly used her credit card to buy alcohol at a nearby supermarket, Monday 28 January. Somerville detectives said the woman parked her car on Point Nepean Road and walked to the beach at lunchtime. Later, she found her car’s window smashed and her handbag missing from the back seat. Police have released CCTV images of a man at the check-out who may be able to assist with their inquiries. Anyone recognising him is asked to

Speedster caught A MT ELIZA woman must have been in a rush to get to the city early Friday afternoon because she allegedly drove past an unmarked police car on Eastlink, near Thompsons Road, at about 160kph. The 23-year-old was intercepted and found to have a suspended licence due to 79 demerit points as well as outstanding arrest warrants for road-traffic offences. She was arrested and left the scene in handcuffs. Her car was impounded for 30 days at a cost of $979. Leading Senior Constable Greg Wolfe, of Somerville Highway Patrol, urges drivers to “slow down, drive according to the conditions and within the speed limit”.

Women sought TWO young women who allegedly attempted to steal clothing and a $200 beach towel from a Sorrento boutique are being sought by police. The women, pictured, selected the items and allegedly removed the security tags in the change rooms. Soon after, one attempted to distract staff while the other began walking out of the store with the clothing stuffed into a bag. An alert staff member stopped her and demanded she return the items. Both women protested their innocence but handed over the items

and left the store when the staff member began calling police. It is believed the women may have stolen items from other stores in the area. They are described as 18-23 years old, one with long blonde hair in a ponytail, fair complexion and a slim build, the other with long brown hair tied back, fair complexion and a solid build. Anyone knowing the women or having information is urged to call Constable Garry Robinson 5986 0444 or Crime Stoppers 1800 333 000.