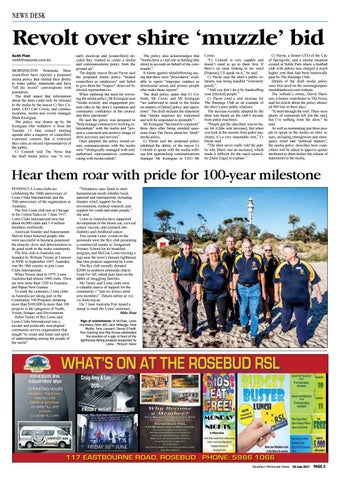 Revolt over shire ‘muzzle’ bid Keith Platt keith@mpnews.com.au MORNINGTON Peninsula Shire councillors have rejected a proposed media policy that limited their ability to make public statements and have “off the record” conversations with journalists. The draft stated that information about the shire could only be released to the media by the mayor Cr Bev Colomb, CEO Carl Cowie, and communications, media and events manager Mark Kestigian. The policy was drawn up by Mr Kestigian who withdrew it from the Tuesday 13 June council meeting agenda after a majority of councillors expressed concern that it restricted their roles as elected representatives of the public. Cr Colomb told The News that the draft media policy was “a very

early mock-up and [councillors] decided they wanted to create a media and communications policy from the ground up”. The deputy mayor Bryan Payne said the proposed media policy “treated councillors as employees” and failed to give them the “respect” deserved by elected representatives. When outlining the need for rewriting the media policy, Mr Kestigian said “media scrutiny and engagement present risks to the shire’s reputation and community confidence in the council and shire operations”. He said the policy was designed to “help manage constructive working relationships” with the media and “present a consistent and positive image of shire activities and services”. Once adopted, the policy would ensure communications with the media were “strategically managed with only authorised representatives communicating with media outlets”.

The policy also acknowledges that “media have a vital role in holding [the shire] to account on behalf of the community”. It warns against whistleblowing saying that there were “procedures” available to report “improper conduct or detrimental action and protect people who make these reports”. The draft policy states that Cr Colomb, Mr Cowie and Mr Kestigian “are authorised to speak to the media on matters of [shire] policy and operations”. The draft includes the statement that “media inquiries are welcomed and will be responded to promptly”. Mr Kestigian “declined to comment” three days after being emailed questions from The News about his “draft” media policy. Cr Payne said the proposed policy inhibited the ability of the mayor Cr Colomb to speak with the media without first approaching communications manager Mr Kestigian or CEO Mr

Cowie. “Cr Colomb is very capable and doesn’t need to go to them first. If there’s an issue relating to my ward [Nepean], I’ll speak on it,” he said. Cr Payne said the shire’s public relations was being handled “extremely poorly”. “And you don’t do it by handcuffing your [elected] people.” Cr Payne cited a rent increase for The Hastings Club as an example of the shire’s poor public relations The increase recently adopted by the shire was based on the club’s income from poker machines. “People got the idea there was no basis for it [the rent increase], but when you look at the income from poker machines, it’s a very reasonable rent,” Cr Payne said. “The shire never really told the public why [there was an increase], which made it difficult for the ward councillor [Julie Edge] to explain.”

Cr Payne, a former CEO of the City of Springvale, said a similar situation existed at Noble Park where a football club with pokies was charged a much higher rent than had been historically paid by The Hastings Club. Details of the draft media policy were first aired on the morningtonpeninsulabandicoot.com website. The website’s owner, David Harrison, a former contributor to The News, said his article about the policy attracted 900 hits in three days. “It went through the roof. There were plenty of comments left [on the site], but I’ve nothing from the shire,” he said. As well as nominating just three people to speak to the media on shire issues, including emergencies and emergency relief and “political matters”, the media policy describes how councillors will be asked to approve quotes attributed to them before the release of statements to the media.

Hear them roar with pride for 100-year milestone PENINSULA Lions clubs are celebrating the 100th anniversary of Lions Clubs International, and the 70th anniversary of the organisation in Australia. The first Lions club met in Chicago in the United States on 7 June 1917. Lions Clubs International now has about 46,000 clubs and 1.4 million members worldwide. American founder and businessman Melvin Jones believed people who were successful in business possessed the tenacity, drive and determination to do good work in the wider community. The first club in Australia was founded by William Tresise at Lismore in NSW in September 1947. Australia was the 18th country to join Lions Clubs International. When Tresise died in 1975, Lions Australia had almost 1000 clubs. There are now more than 1200 in Australia and Papua New Guinea. To mark the centenary, Lions clubs in Australia are taking part in the Community 100 Program, donating more than $100,000 to more than 100 projects in the categories of Youth, Vision, Hunger, and Environment. Helen Turner of Rye Lions said Lions Clubs International was a secular and politically non-aligned community service organisation that sought “to create and foster and spirit of understanding among the people of the world”.

“Volunteers raise funds to meet humanitarian needs whether local, national and international, including disaster relief, support for the environment, medical research, and support for youth and older people,” she said. Lions in Australia have supported development of the bionic ear, cervical cancer vaccine, and research into diabetes and childhood cancer. Two recent Lions’ events on the peninsula were the Rye club presenting a commercial toaster to Tootgarook Primary School for its breakfast program, and McCrae Lions erecting a sign near the town’s famous lighthouse that lists projects supported by Lions. The Rye club recently donated $2000 to southern peninsula charity Food For All, which puts food on the tables of struggling families. Ms Turner said Lions clubs were a valuable source of support for the community – “and we always need new members”. Details online at: rye. vic.lions.org.au On 7 June Australia Post issued a stamp to mark the Lions’ centenary. Mike Hast Sign of commitment: At McCrae, Lions members, from left, Jack Milledge, Nina Blythe, Tony Leonard, Danny O’Neill, Ron Cocking and Ros Ferres celebrated the erection of a sign in front of the lighthouse listing projects supported by Lions. Picture: Yanni