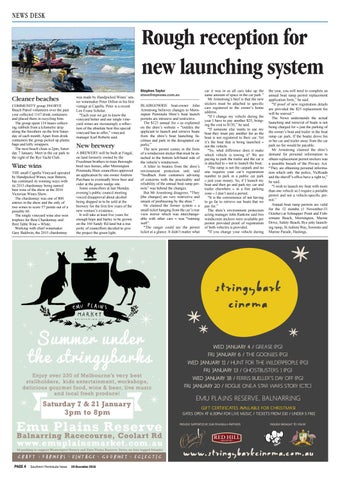 Rough reception for new launching system Cleaner beaches COMMUNITY group 3941RYE Beach Patrol volunteers over the past year collected 1147 drink containers and placed them in recycling bins. The group spent 124 hours collecting rubbish from a kilometre strip along the foreshore on the first Saturday of each month. Apart from drink containers the group picked up plastic bags and lolly wrappers. The next beach clean is 2pm, Saturday 7 January. Meet in the car park to the right of the Rye Yacht Club.

Wine wins THE small Capella Vineyard operated by Handpicked Wines, near Bittern, has continued its winning ways with its 2015 chardonnay being named best wine of the show at the 2016 Victorian Wines Show. The chardonnay was one of 800 entries in the show and the only of two wines to score 57 points out of a possible 60. The single vineyard wine also won trophies for Best Chardonnay and Best Table Wine – White. Working with chief winemaker Gary Baldwin, the 2015 chardonnay

was made by Handpicked Wines’ senior winemaker Peter Dillon in his first vintage at Capella. Peter is a recent Len Evans Scholar. “Each year we get to know the vineyard better and our single vineyard wines are increasingly a reflection of the absolute best this special vineyard has to offer,” vineyard manager Karl Roberts said.

New brewery A BREWERY will be built at Fingal, on land formerly owned by the Freedman brothers to train thoroughbred race horses, after Mornington Peninsula Shire councillors approved an application by site owner Andrew Purchase to eventually brew beer and cider at the green wedge site. Some councillors at last Monday evening’s public council meeting voiced disapproval about alcohol being shipped in to be sold at the brewery for the first few years of the new venture’s existence. It will take at least five years for enough hops and barley to be grown on the 160 Sandy Rd land but a majority of councillors decided to give the project the green light.

Stephen Taylor steve@mpnews.com.au BLAIRGOWRIE boat-owner John Armstrong believes changes to Mornington Peninsula Shire’s boat launch permits are intrusive and restrictive. The $125 annual fee – as explained on the shire’s website – “entitles the applicant to launch and retrieve boats from the shire’s boat launching facilities and park in the designated car parks.” The new permit comes in the form of a windscreen sticker that must be attached to the bottom left-hand side of the vehicle’s windscreen. A letter to boaties from the shire’s environment protection unit said “feedback from customers advising of concerns with the practicality and reliability of the annual boat ramp permits” was behind the changes. But Mr Armstrong disagrees: “They [the changes] are very restrictive and smack of profiteering by the shire.” He claimed the former system – a small ticket hanging from the car’s rear view mirror which was interchangeable with other cars – was “running well”. “The ranger could see the permit ticket at a glance. It didn’t matter what

car it was in as all cars take up the same amount of space in the car park.” Mr Armstrong’s beef is that the new stickers must be attached to specific cars registered to the owner’s home address. “If I change my vehicle during the year I have to pay another $25, bringing the cost to $150,” he said. “If someone else wants to use my boat they must pay another fee as the boat is not registered to their car. Yet it’s the boat that is being launched – not the vehicle. “So, what difference does it make which vehicle is towing it? We are paying to park the trailer and the car it is attached to – not to launch the boat. “The ramp is not the carpark and no one requires your car’s registration number to park in a public car park – just your money. So, if I launch my boat and then go and park my car and trailer elsewhere – in a free parking zone – I don’t need a permit. “It is the convenience of not having to go far to retrieve our boats that we pay for.” The shire’s environment protection acting manager John Rankine said two windscreen stickers were available per permit provided proof of registration of both vehicles is provided. “If you change your vehicle during

the year, you will need to complete an annual boat ramp permit replacement application form,” he said. “If proof of new registration details are provided the $25 replacement fee will be waived.” The News understands the actual launching and retrieval of boats is not being charged for – just the parking of the owner’s boat and trailer in the boat ramp car park. If the boatie drove his or her car and trailer away from the car park no fee would be payable. Mr Armstrong claimed the shire’s demand for personal information to obtain replacement permit stickers was a possible breach of the Privacy Act. “They are obtaining personal information which only the police, VicRoads and the sheriff’s office have a right to,” he said. “I wish to launch my boat with more than one vehicle so I require a portable permit and not a vehicle-specific permit.” Annual boat ramp permits are valid for the 12 months (1 November-31 October) at Schnapper Point and Fishermans Beach, Mornington, Marine Drive, Safety Beach, Rye jetty launching ramp, St Aubins Way, Sorrento and Marine Parade, Hastings.

PROUDLY SUPPORTED BY OUR PENINSULA PARTNERS

PROUDLY BROUGHT TO YOU BY