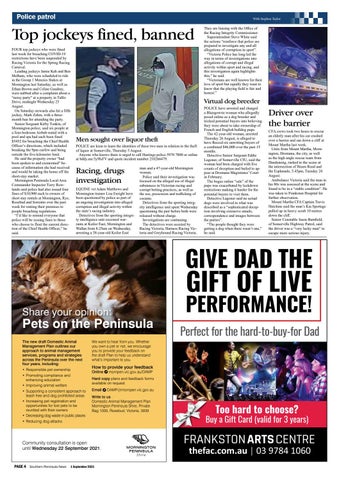 Top jockeys fined, banned FOUR top jockeys who were fined last week for breaching COVID-19 restrictions have been suspended by Racing Victoria for the Spring Racing Carnival. Leading jockeys Jamie Kah and Ben Melham, who were scheduled to ride in the Group 1 Menzies Stakes at Mornington last Saturday, as well as Ethan Brown and Celine Gaudray, were nabbed after a complaint about a “noisy party” at a property in Tallis Drive, midnight Wednesday 25 August. On Saturday stewards also hit a fifth jockey, Mark Zahra, with a threemonth ban for attending the party. Senior Sergeant Kirby Tonkin, of Mornington police, said six people at a four-bedroom Airbnb rental with a pool and spa had each been fined $5452 for breaching the Chief Health Officer’s directions, which included breaking the 9pm curfew and being outside the five-kilometre limit. He said the property owner “had been spoken to and exonerated” because of information she had received and would be taking the home off the short-stay market. Mornington Peninsula Local Area Commander Inspector Terry Rowlands said police had also issued four fines of $10,900 each to owners of short stay rentals at Mornington, Rye, Rosebud and Sorrento over the past week for renting their premises to people breaching regulations. “I’d like to remind everyone that police will be issuing fines to those who choose to flout the current direction of the Chief Health Officer,” he said.

Men sought over liquor theft POLICE are keen to learn the identities of these two men in relation to the theft of liquor at Somerville, Thursday 5 August. Anyone who knows them is urged to call Hastings police 5970 7800 or online at bddy.me/3y9IsFV and quote incident number 210266479.

Racing, drugs investigation EQUINE vet Adam Matthews and Mornington trainer Lisa Enright have been questioned by police as part of an ongoing investigation into alleged corruption and illegal activity within the state’s racing industry. Detectives from the sporting integrity intelligence unit executed warrants at Keilor East, Mornington and Wallan from 8.25am on Wednesday, arresting a 38-year-old Keilor East

man and a 47-year-old Mornington woman. Police said their investigation was focused on the alleged use of illegal substances in Victorian racing and corrupt betting practices, as well as the use, possession and trafficking of cocaine. Detectives from the sporting integrity intelligence unit spent Wednesday questioning the pair before both were released without charge. Investigations are continuing. The detectives were assisted by Racing Victoria, Harness Racing Victoria and Greyhound Racing Victoria.

Pets on the Peninsula The new draft Domestic Animal Management Plan outlines our approach to animal management services, programs and strategies across the Peninsula over the next four years, including: • Responsible pet ownership • Promoting compliance and enhancing education • Improving animal welfare • Supporting a consistent approach to leash free and dog prohibited areas • Increasing pet registration and opportunities for lost pets to be reunited with their owners • Decreasing dog waste in public places • Reducing dog attacks.

We want to hear from you. Whether you own a pet or not, we encourage you to provide your feedback on the draft Plan to help us understand what’s important to you.

How to provide your feedback Online

They are liaising with the Office of the Racing Integrity Commissioner. Superintendent Steve White said the actions “reinforce that police are prepared to investigate any and all allegations of corruption in sport”. “Victoria Police has long led the way in terms of investigations into allegations of corrupt and illegal activity within sport and racing, and this investigation again highlights this,” he said. “Victorians are well known for their love of sport but equally they want to know that the playing field is fair and honest.”

POLICE have arrested and charged a Blairgowrie woman who allegedly posed online as a dog breeder and tricked potential buyers into believing they were about to take ownership of French and English bulldog pups. The 42-year-old woman, arrested Thursday 26 August, is alleged to have fleeced six unwitting buyers of a combined $46,000 over the past 15 months. Detective Senior Sergeant Eddie Lagoner, of Somerville CIU, said the woman had been charged with five counts of deception and bailed to appear at Dromana Magistrates’ Court in February. The bogus online “sale” of the pups was exacerbated by lockdown restrictions making it harder for the potential buyers to visit them. Detective Lagoner said no actual dogs were involved in what was described as a “sophisticated deception involving extensive emails, correspondence and images between the parties”. “The people thought they were getting a dog when there wasn’t one,” he said.

Driver over the barrier CFA crews took two hours to rescue an elderly man after his car crashed over a barrier and ran down a cliff at Mount Martha last week. Units from Mount Martha, Mornington, Dromana, the city, as well as the high angle rescue team from Dandenong, rushed to the scene at the intersection of Hearn Road and the Esplanade, 5.45pm, Tuesday 24 August. Ambulance Victoria said the man in his 80s was assessed at the scene and found to be in a “stable condition”. He was taken to Frankston Hospital for further observation. Mount Martha CFA Captain Travis Hutchins said the man’s Kia Sportage pulled up in heavy scrub 10 metres down the cliff. Senior Constable Jason Bamfield, of Somerville Highway Patrol, said the driver was a “very lucky man” to escape more serious injury.