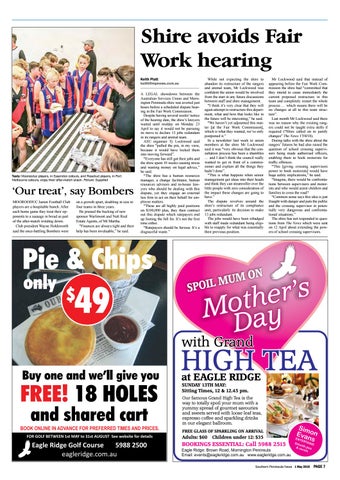 ‘Our treat’, say Bombers MOOROODUC Junior Football Club players are a hospitable bunch. After each home game they treat their opponents to a sausage in bread as part of the after-match winding down. Club president Wayne Holdsworth said the once-battling Bombers were

on a growth spurt, doubling in size to four teams in three years. He praised the backing of new sponsor Warlimont and Nutt Real Estate Agents, of Mt Martha. “Finances are always tight and their help has been invaluable,” he said.

A LEGAL showdown between the Australian Services Union and Mornington Peninsula shire was averted just hours before a scheduled dispute hearing in the Fair Work Commission. Despite having several weeks’ notice of the hearing date, the shire’s lawyers waited until midday on Monday 23 April to say it would not be pursuing its move to declare 13 jobs redundant in its rangers and animal team. ASU organiser Ty Lockwood said the shire “pulled the pin, in my view, because it would have locked them into moving forward”. “Everyone has still got their jobs and the shire spent 10 weeks causing stress and wasting money on legal advice,” he said. “The shire has a human resources manager, a change facilitator, human resources advisors and in-house lawyers who should be dealing with this dispute, yet they engage an external law firm to act on their behalf for employee matters. “These are all highly paid positions on $100,000 plus, they then contract out this dispute which ratepayers end up footing the bill for. It’s not the first time either. “Ratepayers should be furious. It’s a disgraceful waste.”

While not expecting the shire to abandon its restructure of the rangers and animal team, Mr Lockwood was confident the union would be involved from the start in any future discussions between staff and shire management. “I think it’s very clear that they will again attempt to restructure this department, what and how that looks like in the future will be interesting,” he said. “We haven’t yet adjourned this matter [at the Fair Work Commission], which is what they wanted, we’ve only postponed it.” In a newsletter last week to union members at the shire Mr Lockwood said it was “very obvious that the consultation process has been a shambles … and I don’t think the council really wanted to get in front of a commissioner and explain all the things they hadn’t done”. “This is what happens when senior management get ideas into their heads and think they can steamroller over the little people with zero consideration of the impact these changes are going to have.” The dispute revolves around the shire’s restructure of its compliance unit, particularly its decision to make 13 jobs redundant. The jobs would have been rebadged with staff made redundant being eligible to reapply for what was essentially their previous position.

Mr Lockwood said that instead of appearing before the Fair Work Commission the shire had “committed that they intend to cease immediately the current proposed restructure in this team and completely restart the whole process … which means there will be no changes at all to this team structure”. Last month Mr Lockwood said there was no reason why the existing rangers could not be taught extra skills if required (“Shire called on to justify changes” The News 17/4/18). During talks with the shire about the rangers’ futures he had also raised the question of school crossing supervisors being made authorised officers, enabling them to book motorists for traffic offences. “This [giving crossing supervisors power to book motorists] would have huge safety implications,” he said. “Imagine, there would be confrontations between supervisors and motorists and who would assist children and families to cross the road? “Common sense says this idea is just fraught with danger and puts the public and the crossing supervisor in potentially very dangerous and confrontational situations.” The shire has not responded to questions from The News which were sent on 12 April about extending the powers of school crossing supervisors.