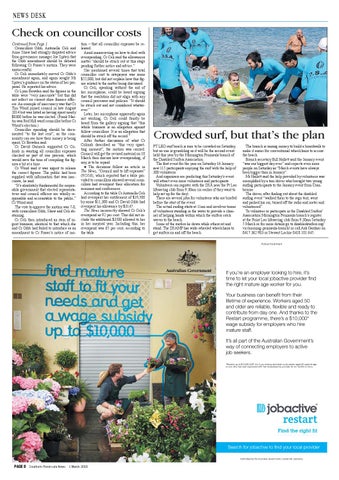 Check on councillor costs Continued from Page 1 Councillors Gibb, Antonella Celi and Anne Shaw had strongly disputed advice from governance manager Joe Spiteri that the Gibb amendment should be debated following Cr Fraser’s motion. They were unsuccessful. Cr Celi immediately moved Cr Gibb’s amendment again, and again sought Mr Spiteri’s guidance on the status of her proposal. He repeated his advice. Cr Lynn Bowden said the figures in the table were “very inaccurate” but this did not reflect on current shire finance officers. An example of inaccuracy was that Cr Tim Wood joined council in late August 2014 but was listed as having spent nearly $8300 before he was elected. (Frank Martin was Red Hill ward councillor before Cr Wood’s election.) Councillor spending should be documented “to the last cent”, so the community can see how their money is being spent, Cr Bowden said. Cr David Garnock supported Cr Colomb in wanting all councillor expenses checked as part of one process, which would save the time of compiling the figures a bit at a time. Cr Wood said it was urgent to release the correct figures. The public had been supplied with information that was inaccurate, he said. “It’s absolutely fundamental for responsible government that elected representatives and council officers are wholly responsible and accountable to the public,” Cr Wood said. The vote to approve the motion was 7-0, with councillors Gibb, Shaw and Celi abstaining. Cr Celi then introduced an item of urgent business, identical to that which she and Cr Gibb had failed to introduce as an amendment to Cr Fraser’s notice of mo-

tion – that all councillor expenses be released. Amid manoeuvring on how to deal with overspending, Cr Celi said the allowances matter “should be struck out at this stage pending further notice and advice.” She mentioned several times that total councillor cost to ratepayers was some $55,000, but did not explain how this figure related to the matter being discussed. Cr Celi, speaking without the aid of her microphone, could be heard arguing that the resolution did not align with any council processes and policies. “It should be struck out and not considered whatsoever.” Later, her microphone apparently again not working, Cr Celi could faintly be heard from the gallery arguing that “this whole business is an allegation against fellow councillors. It is an allegation that should be struck off the record.” After further discussion of what Cr Colomb described as “this very upsetting moment”, the motion was carried. Council will get the revised material on 10 March then discuss how overspending, if any, is to be repaid.  The decisions follow an article in The News, “Council nod to lift expenses” (9/2/16), which reported that a table provided to councillors showed several councillors had overspent their allocation for seminars and conferences. According to the table Cr Antonella Celi had overspent her entitlement of $19,500 by some $11,300 and Cr David Gibb had overspent his allowance by $3147. The News incorrectly showed Cr Celi’s overspend as 92 per cent. This did not include the additional $3500 allowed to her in her mayoral year. Including this, her overspend was 65 per cent, according to the table.

Crowded surf, but that’s the plan PT LEO surf beach is sure to be crowded on Saturday, but no one is grumbling as it will be the second event held this year by the Mornington Peninsula branch of the Disabled Surfers Association. The first event for the year on Saturday 16 January saw 115 participants enjoying the surf with the help of 300 volunteers. And organisers are predicting this Saturday’s event will attract even more volunteers and participants. Volunteers can register with the DSA near the Pt Leo lifesaving club from 9.30am (or earlier if they want to help set up for the day). There are several jobs for volunteers who are briefed before the start of the event. The actual surfing starts at 11am and involves teams of volunteers standing in the water to provide a channel of helping hands within which the surfers catch waves to the beach. Some of the surfers lie down while others sit and stand. The DSAMP has wide-wheeled wheelchairs to get surfers on and off the beach.

The branch is raising money to build a boardwalk to make it easier for conventional wheelchairs to access the beach. Branch secretary Bill Hallett said the January event “was our biggest day ever” and expects even more people on Saturday as “March events have always been bigger than in January”. Mr Hallett said the help provided by volunteers was exemplified by a taxi driver who brought two young surfing participants to the January event from Cranbourne. The driver, after finding out about the disabled surfing event “walked them to the rego tent, went and parked his car, turned off the radio and meter and volunteered”. To volunteer or participate in the Disabled Surfers’ Association Mornington Peninsula branch’s register at the Point Leo lifesaving club from 9.30am Saturday 5 March or for more details go to disabledsurfers.org/ vic/morning-peninsula-branch/ or call Ash Gardner on 0417 362 983 or Stewart Lockie 0418 101 645.