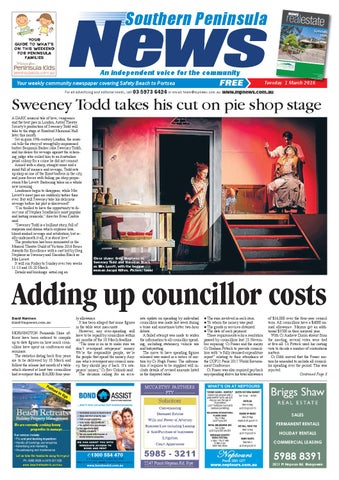 Your guide to whatâ&amp;#x20AC;&amp;#x2122;s on this weekend for peninsula families

Sweeney Todd takes his cut on pie shop stage A DARK musical tale of love, vengeance and the best pies in London, Astral Theatre Societyâ&amp;#x20AC;&amp;#x2122;s production of Sweeney Todd will take to the stage at Rosebud Memorial Hall later this month. Set in grim 19th-century London, the musical tells the story of wrongfully-imprisoned barber Benjamin Barker (aka Sweeney Todd), and his desire for revenge against the scheming judge who exiled him to an Australian penal colony for a crime he did not commit. Armed with a sharp, straight razor and a mind full of menace and revenge, Todd sets up shop as one of the finest barbers in the city, and joins forces with failing pie shop proprietress Mrs Lovett. Barbering takes on a whole new meaning. Londoners begin to disappear, while Mrs Lovettâ&amp;#x20AC;&amp;#x2122;s meat pies are suddenly tastier than ever. But will Sweeney take his delicious revenge before his plot is discovered? â&amp;#x20AC;&amp;#x153;Iâ&amp;#x20AC;&amp;#x2122;m thrilled to have the opportunity to direct one of Stephen Sondheim&#39;s most popular and lasting musicals,â&amp;#x20AC;? director Evan Knoble said. â&amp;#x20AC;&amp;#x153;Sweeney Todd is a brilliant story, full of suspense and drama which explores loss, blood-soaked revenge and retribution, but really underneath it all, it is about loveâ&amp;#x20AC;?. The production has been nominated in the Musical Theatre Guild of Victoria 2016 Bruce Awards for Excellence with a cast led by Greg Stephens as Sweeney and Sheridan Black as Mrs Lovett. It will run Friday to Sunday over two weeks 11-13 and 18-20 March. Details and bookings: astral.org.au

Adding up councillor costs David Harrison david@mpnews.com.au MORNINGTON Peninsula Shire officers have been ordered to compile up to date figures on how much councillors have spent on conferences and seminars. The statistics dating back four years are to be delivered by 10 March and follow the release last month of a table which showed at least two councillors had overspent their $16,000 four-year-

rate update on spending by individual councillors was made last week during a tense and sometimes bitter two-hour debate. A failed attempt was made to widen the information to all councillor spending, including stationery, vehicle use and babysitting. The move to have spending figures released was raised in a notice of motion by Cr Hugh Fraser. The information it requires to be supplied will include details of revised amounts listed in the disputed table:

Immediate access to Bond &amp; Rent nt Move into that property now Fast prompt assistance Easy terms and conditions No upfront fees and charges Pre approval before ďŹ nding a property We can assist with transfer off bonds between properties

ď Ž The sum involved in each item. ď Ž To whom the money was paid. ď Ž The goods or services obtained. ď Ž The date of each payment.

These requirements echo a resolution passed by councillors last 23 November requiring Cr Fraser and the mayor Cr Graham Pittock to provide councillors with â&amp;#x20AC;&amp;#x153;a fully itemised expenditure reportâ&amp;#x20AC;? relating to their attendance at the COP21 Paris 2015 World Environment Conference. Cr Fraser was also required pay back any spending above his total allowance

of $16,000 over the four-year council term. All councillors have a $4000 annual allowance. Mayors get an additional $3500 in their mayoral year. With Cr Andrew Dixon absent from the meeting, several votes were tied at five-all. Cr Pittock used his casting vote to decide a number of contentious matters. Cr Gibb moved that the Fraser motion be amended to include all councillor spending over the period. This was rejected. Continued Page 8