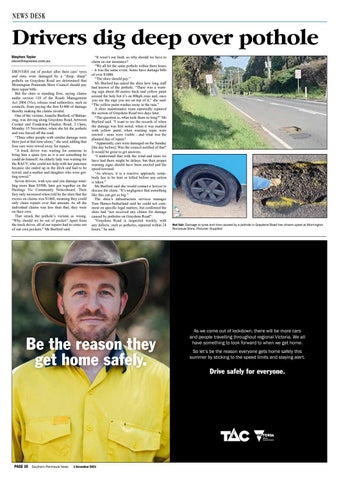 Drivers dig deep over pothole Stephen Taylor steve@mpnews.com.au DRIVERS out of pocket after their cars’ tyres and rims were damaged by a “deep, sharp” pothole on Graydens Road are determined that Mornington Peninsula Shire Council should pay their repair bills. But the shire is standing firm, saying claims under section 110 of the Roads Management Act 2004 (Vic), release road authorities, such as councils, from paying the first $1460 of damage thereby making the claims invalid. One of the victims, Annelie Burford, of Balnarring, was driving along Graydens Road, between Coolart and Frankston-Flinders Road, 5.15pm, Monday 15 November, when she hit the pothole and was forced off the road. “Three other people with similar damage were there just at that time alone,” she said, adding that four cars were towed away for repairs. “A truck driver was waiting for someone to bring him a spare tyre as it is not something he could do himself. An elderly lady was waiting for the RACV, who could not help with her puncture because she ended up in the ditch and had to be towed, and a mother and daughter who were getting towed.” Seven drivers, with tyre and rim damage totalling more than $3500, later got together on the Hastings Vic Community Noticeboard. Their fury only increased when told by the shire that the excess on claims was $1460, meaning they could only claim repairs over that amount. As all the individual claims was less than that, they were on their own. That struck the pothole’s victims as wrong. “Why should we be out of pocket? Apart from the truck driver, all of our repairs had to come out of our own pockets,” Ms Burford said.

“It wasn’t our fault, so why should we have to claim on our insurance? “We all hit the same pothole within three hours – it was the same event. Some have damage bills of over $1000. “The shire should pay.” Ms Burford has asked the shire how long staff had known of the pothole. “There was a warning sign about 40 metres back and yellow paint around the hole but it’s an 80kph zone and, once you see the sign you are on top of it,” she said. “The yellow paint washes away in the rain.” A shire maintenance team reportedly repaired the section of Graydens Road two days later. “The question is, what took them so long?” Ms Burford said. “I want to see the records of when the damage was first noted, when it was marked with yellow paint, when warning signs were erected - none were visible - and what was the planned day of repair? “Apparently, cars were damaged on the Sunday [the day before]: Was the council notified of that? It would be great to get answers. “I understand that with the wind and rains we have had there might be delays, but then proper warning signs should have been erected and the speed lowered. “As always, it is a reactive approach, somebody has to be hurt or killed before any action is taken.” Ms Burford said she would contact a lawyer to discuss the claim. “It’s negligence that something like this can get so big.” The shire’s infrastructure services manager Tom Haines-Sutherland said he could not comment on specific legal matters, but confirmed the shire had “not received any claims for damage caused by potholes on Graydens Road”. “Graydens Road is inspected weekly, with any defects, such as potholes, repaired within 24 hours,” he said.

Be the reason they get home safely.

Not fair: Damage to tyres and rims caused by a pothole in Graydens Road has drivers upset at Mornington Peninsula Shire. Pictures: Supplied

As we come out of lockdown, there will be more cars and people travelling throughout regional Victoria. We all have something to look forward to when we get home. So let’s be the reason everyone gets home safely this summer by sticking to the speed limits and staying alert.

Drive safely for everyone.