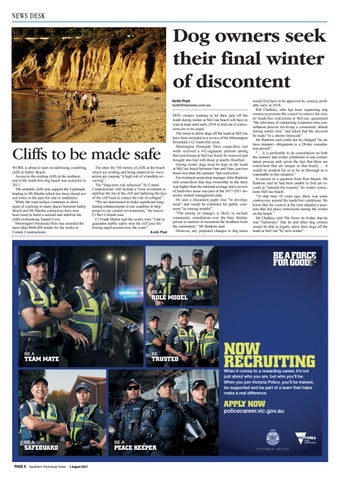 Cliffs to be made safe The shire the 100 metres of cliffs at the beach which are eroding and being undercut by wave action are causing “a high risk of a landslip occurring”. The “long-term risk reduction” by Contek Constructions’ will include a “rock revetment to stabilise the toe of the cliff and battering the face of the cliff back to reduce the risk of collapse”. “We are determined to make significant longlasting enhancements to our coastline to help preserve our coastal environments,” the mayor Cr Bev Colomb said. Cr Frank Martin said the works were “vital to guarantee public safety near the cliff area following rapid erosion over the years”. Keith Platt

WORK is about to start on stabilising crumbling cliffs at Safety Beach. Access to the eroding cliffs at the northern end of the leash-free dog beach was restricted in 2015. The unstable cliffs also support the Esplanade leading to Mt Martha which has been closed several times in the past few due to landslides. While the road surface continues to show signs of cracking in many places between Safety Beach and Mt Martha contractors have now been hired to build a seawall and stabilise the cliffs overlooking Tassels Cove. Mornington Peninsula Shire has awarded the more than $660,000 tender for the works to Contek Constructions.

DOG owners wanting to let their pets off the leash during winter at McCrae beach will have to wait at least until early 2018 to find out if restrictions are to be eased. The times to allow dogs off the leash at McCrae have been included in a review of the Mornington Peninsula’s 62 leash-free areas. Mornington Peninsula Shire councillors last week received a 442-signature petition asking that restrictions at McCrae beach be removed and brought into line with those at nearby Rosebud. During winter dogs must be kept on the leash at McCrae beach between 9am and 5pm, just two hours less than the summer 7pm restriction. Environment protection manager John Rankine told councillors that dog ownership in the shire was higher than the national average and a review of leash-free areas was part of the 2017-2021 domestic animal management plan. He said a discussion paper was “in development” and would be exhibited for public comment “in coming months”. “The timing of changes is likely to include community consultation over the busy holiday period in summer to maximise the feedback from the community,” Mr Rankine said. However, any proposed changes to dog times

would first have to be approved by council, probably early in 2018. Bill Chalkley, who has been organising dog owners to pressure the council to remove the winter leash-free restrictions at McCrae, questioned “the relevance of conducting a summer time consultation process involving a community absent during winter time” and asked that the decision be made “in a shorter timescale”. Mr Rankine said could not be changed “as we have statutory obligations to a 28-day consultation period”. “… It is preferable to do consultation on both the summer and winter conditions in one consultation process and, given the fact that there are restrictions that are unique to that beach, … it would be prudent for us to be as thorough as is reasonable in this situation.” In answer to a question from Ron Moore, Mr Rankine said he had been unable to find ant records to “unearth the reasons” for winter restrictions McCrae beach. “At that time 10 years ago, there was some controversy around the leash-free conditions. We know that the council at the time adopted a position that did place restrictions during the winter on the beach.” Mr Chalkley told The News on Friday that he was “optimistic” that he and other dog owners would be able to legally allow their dogs off the leash at McCrae “by next winter”.

When it comes to a rewarding career, it’s not just about who you are, but who you’ll be. When you join Victoria Police, you’ll be trained, be supported and be part of a team that helps make a real difference.