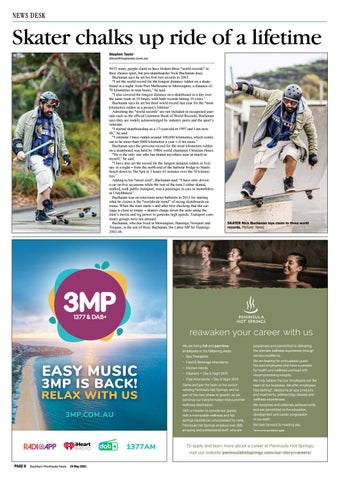 Skater chalks up ride of a lifetime Stephen Taylor steve@mpnews.com.au NOT many people claim to have broken three “world records” in their chosen sport, but pro-skateboarder Nick Buchanan does. Buchanan says he set his first two records in 2003. “I set the world record for the longest distance ridden on a skateboard in a night: from Port Melbourne to Mornington, a distance of 70 kilometres in nine hours,” he said. “I also covered the longest distance on a skateboard in a day over the same route in 10 hours, with both records lasting 10 years.” Buchanan says he set his third world record last year for the “most kilometres ridden in a person’s lifetime”. Admitting the “world records” are not included in recognised journals such as the official Guinness Book of World Records, Buchanan says they are widely acknowledged by industry peers and the sport’s veterans. “I started skateboarding as a 17-year-old in 1997 and I am now 40,” he said. “I estimate I have ridden around 100,000 kilometres, which works out to be more than 5000 kilometres a year – if not more.” Buchanan says the previous record for the most kilometres ridden on a skateboard was held by 1980s world champion Christian Hosoi. “He is the only one who has skated anywhere near as much as myself,” he said. “I have also set the record for the longest distance ridden in Sydney in a night – from the north end of the harbour bridge to Manly beach down to The Spit in 5 hours 45 minutes over the 50 kilometres.” Adding to his “street cred”, Buchanan said: “I have only driven a car on five occasions while the rest of the time I either skated, walked, took public transport, was a passenger in cars or motorbikes or I hitchhiked.” Buchanan was on television news bulletins in 2013 for starting what he claims is the “worldwide trend” of racing skateboards on trains. When the train starts – and after first checking that the carriage is close to empty – skaters charge down the aisle using the train’s inertia and leg power to generate high speeds. Transport commuter groups were not amused. Buchanan, who has lived at Mornington, Hastings, Newport and Torquay, is the son of Rosy Buchanan, the Labor MP for Hastings 2002-06.

reawaken your career with us We are hiring full and part-time employees in the following areas: • Spa Therapists • Food & Beverage Attendants • Kitchen Hands • Cleaners – Day & Night Shift • Pool Attendants – Day & Night Shift Come and join the team at the awardwinning Peninsula Hot Springs, and be part of the next phase of growth, as we continue our transformation into a premier wellness destination. With a mission to provide our guests with a memorable wellness and hot springs experience, unsurpassed by none, Peninsula Hot Springs employs over 300 amazing and professional staff, who are

passionate and committed to delivering the ultimate wellness experience through service excellence. We are looking for enthusiastic guest focused employees who have a passion for health and wellness and lead with uncompromising integrity. We truly believe that our employees are the heart of our business. We offer employees free bathing*, discounts on spa products and treatments, pilates/yoga classes and wellness experiences. We recognise and celebrate achievements and are committed to the education, development and career progression of our staff. We look forward to meeting you. *terms and conditions apply

To apply and learn more about a career at Peninsula Hot Springs, visit our website peninsulahotsprings.com/our-story/careers/ PAGE 6