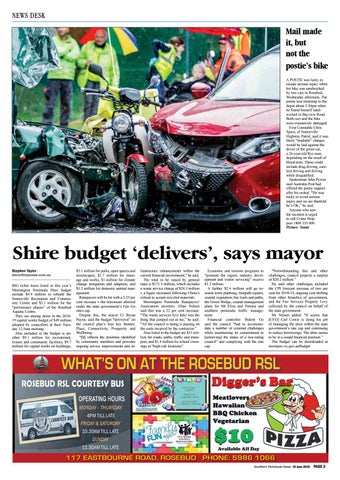 Mail made it, but not the postie’s bike A POSTIE was lucky to escape serious injury when his bike was sandwiched by two cars in Rosebud, Wednesday afternoon. The postie was returning to the depot about 3.30pm when he found himself sandwiched in Bayview Road. Both cars and the bike were extensively damaged. First Constable Chris Spero, of Somerville Highway Patrol, said it was likely “multiple” charges would be laid against the driver of the green car, a 26-year-old Rye man, depending on the result of blood tests. These could include drug driving, careless driving and driving while disqualified. Spokesman John Pyrros said Australia Post had offered the postie support after his ordeal. “He was lucky to avoid serious injury and we are thankful he’s OK,” he said. Anyone who saw the incident is urged to call Crime Stoppers 1800 333 000. Picture: Yanni

Shire budget ‘delivers’, says mayor Stephen Taylor steve@mpnews.com.au BIG ticket items listed in this year’s Mornington Peninsula Shire budget include $4.9 million to rebuild the Somerville Recreation and Community Centre and $5.1 million for the “preliminary phases” of the Rosebud Aquatic Centre. They are among items in the 201819 capital works budget of $49 million adopted by councillors at their Tuesday 12 June meeting. Also included in the budget is another $9.1 million for recreational, leisure and community facilities; $9.7 million for capital works on buildings;

$5.1 million for parks, open spaces and streetscapes; $2.7 million for drainage and works; $1 million for climate change mitigation and adaption; and $1.2 million for domestic animal management. Ratepayers will be hit with a 2.25 per cent increase – the maximum allowed under the state government’s Fair Go rates cap. Despite this, the mayor Cr Bryan Payne, said the budget “delivered” on the council plan’s four key themes: Place, Connectivity, Prosperity and Wellbeing. “[It] reflects the priorities identified by community members and provides ongoing service improvements and in-

frastructure enhancements within the current financial environment,” he said. The total to be raised by general rates is $171.5 million, which includes a waste service charge of $24.3 million – a figure increased following China’s refusal to accept recycled materials. Mornington Peninsula Ratepayers’ Association secretary Allan Nelsen said this was a 22 per cent increase. “The waste services levy hike was the thing that jumped out at me,” he said. “All the council is doing is passing on the costs incurred by the contractor.” Also listed in the budget are $11 million for roads, paths, traffic and transport, and $1.4 million for school crossings in “high risk locations”.

Economic and tourism programs to “promote the region, industry development and visitor servicing” receive $1.3 million. A further $2.4 million will go towards town planning, footpath repairs, coastal vegetation, bay trails and paths, the Green Wedge, coastal management plans for Mt Eliza and Portsea and southern peninsula traffic management. Financial controller Bulent Oz said the council “had to accommodate a number of external challenges while maintaining its commitment to [achieving] the status of a low-rating council” and complying with the rate cap.

“Notwithstanding this and other challenges, council projects a surplus of $20.2 million.” He said other challenges included the CPI forecast increase of two per cent for 2018-19, ongoing cost shifting from other branches of government, and the Fire Services Property Levy collected by the council on behalf of the state government. Mr Nelsen added: “It seems that [CEO] Carl Cowie is doing his job of managing the shire within the state government’s rate cap and continuing to reduce borrowings. The shire seems to be in a sound financial position.” The budget can be downloaded at mornpen.vic.gov.au/budget