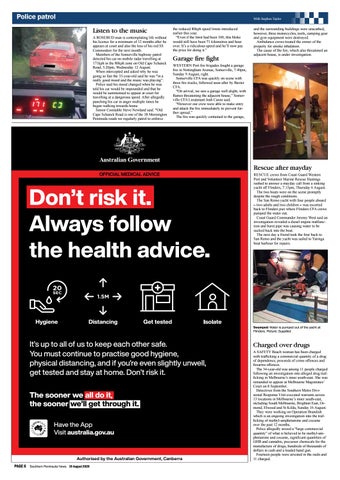 Listen to the music A ROSEBUD man is contemplating life without his licence for a minimum of 12 months after he appears at court and also the loss of his red SS Commodore for the next month. Members of the Somerville highway patrol detected his car on mobile radar travelling at 171kph in the 80kph zone on Old Cape Schanck Road, 5.20pm, Wednesday 12 August. When intercepted and asked why he was going so fast the 35-year-old said he was “in a really good mood and the music was playing”. Police said his mood changed when he was told his car would be impounded and that he would be summonsed to appear at court for travelling at a dangerous speed. After allegedly punching his car in anger multiple times he began walking towards home. Senior Constable Steve Newland said: “Old Cape Schanck Road is one of the 38 Mornington Peninsula roads we regularly patrol to enforce

the reduced 80kph speed limits introduced earlier this year. “Even if the limit had been 100, this bloke would still have been 71 kilometres and hour over. It’s a ridiculous speed and he’ll now pay the price for doing it.”

and the surrounding buildings were unscathed, however, three motorcycles, tools, camping gear and gym equipment were destroyed. Ambulance crews treated the owner of the property for smoke inhalation. The cause of the fire, which also threatened an adjacent house, is under investigation.

Rescue after mayday RESCUE crews from Coast Guard Western Port and Volunteer Marine Rescue Hastings rushed to answer a mayday call from a sinking yacht off Flinders, 7.15pm, Thursday 6 August. The two boats were on the scene promptly despite the rough conditions. The San Remo yacht with four people aboard – two adults and two children – was escorted back to Flinders pier where Flinders CFA crews pumped the water out. Coast Guard Commander Jeremy West said an investigation revealed a diesel engine malfunction and burst pipe was causing water to be sucked back into the boat. The next day a friend took the four back to San Remo and the yacht was sailed to Yaringa boat harbour for repairs.

Swamped: Water is pumped out of the yacht at Flinders. Picture: Supplied

Charged over drugs A SAFETY Beach woman has been charged with trafficking a commercial quantity of a drug of dependence, proceeds of crime offences and firearms offences. The 34-year-old was among 11 people charged following an investigation into alleged drug trafficking in Melbourne’s inner south-east. She was remanded to appear at Melbourne Magistrates’ Court on 8 September. Detectives from the Southern Metro Divisional Response Unit executed warrants across 13 locations in Melbourne’s inner south-east, including South Melbourne, Brighton East, Ormond, Elwood and St Kilda, Sunday 16 August. They were working on Operation Brandish which is an ongoing investigation into the trafficking of methyl-amphetamine and cocaine over the past 12 months. Police allegedly seized a “large commercial quantity” of what is believed to be methyl-amphetamine and cocaine, significant quantities of GHB and cannabis, precursor chemicals for the manufacture of drugs, hundreds of thousands of dollars in cash and a loaded hand gun. Fourteen people were arrested in the raids and 11 charged.