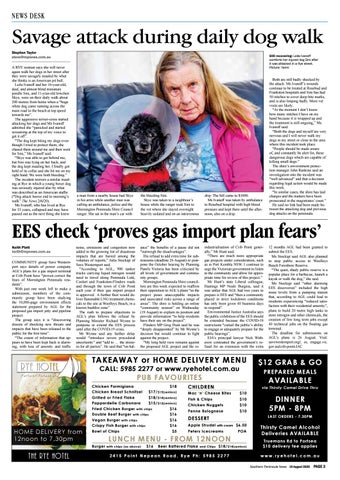 Savage attack during daily dog walk Stephen Taylor steve@mpnews.com.au A RYE woman says she will never again walk her dogs in her street after they were savagely mauled by what she thinks is an American pit bull. Leila Ivanoff and her 16-year-old, deaf, and almost blind miniature poodle Sini, and 11-year-old lowchen Skye, were on their daily walk about 200 metres from home when a “huge white dog came running across the main road to the beach at top speed towards me”. The aggressive terrier-cross started attacking her dogs and Ms Ivanoff admitted she “panicked and started screaming at the top of my voice to get it off”. “The dog kept biting my dogs even though I tried to protect them; she chased them around me and then went for Sini,” Ms Ivanoff said. “Skye was able to get behind me, but Sini was lying on her back, and the dog kept mauling her. I finally got hold of its collar and she bit me on my right hand. We were both bleeding.” The incident mirrors a similar mauling at Rye in which a young boxer dog was seriously injured also by what was described as an American staffie (“Dog attack horror end to morning’s walk” The News 2/6/20). Ms Ivanoff, who has lived at Rye for 33 years, collapsed and may have passed out as the next thing she knew

Still recovering: Leila Ivanoff comforts her injured dog Sini after it was attacked in a Rye street. Picture: Yanni

a man from a nearby house had Skye in his arms while another man was calling an ambulance, police and the Mornington Peninsula Shire Council ranger. She sat in the man’s car with

the bleeding Sini. Skye was taken to a neighbour’s house while the ranger took Sini to the vet where she stayed overnight heavily sedated and on an intravenous

Both are still badly shocked by the attack: Ms Ivanoff’s wounds continue to be treated at Rosebud and Frankston hospitals and Sini has had 50 stitches to cover deep bite marks, and is also limping badly. More vet visits are likely. “At the moment I don’t know how many stitches I have on my hand because it is wrapped up and the treatment is still ongoing,” Ms Ivanoff said. “Both the dogs and myself are very nervous and I will never walk my dogs in my street or close to the area where this incident took place. “People should be made aware of, and constantly be alert for, these dangerous dogs which are capable of killing small dogs.” The shire’s environment protection manager John Rankine said an investigation into the incident was “well advanced” and that a decision regarding legal action would be made this week. “In similar cases, the shire has laid charges and the matters have been prosecuted in the magistrates’ court.” He said no link had been made between the attacking dog and previous dog attacks on the peninsula.

drip. The bill came to $1000. Ms Ivanoff was taken by ambulance to Rosebud hospital with high blood pressure and kept there until the afternoon, also on a drip.

EES check ‘proves gas import plan fears’ Keith Platt keith@mpnews.com.au COMMUNITY group Save Westernport says details of power company AGL’s plans for a gas import terminal at Crib Point have “proven correct the fears of Mornington Peninsula residents”. With just one week left to make a submission, members of the community group have been studying the 10,000-page environment effects statement prepared by AGL for the proposed gas import jetty and pipeline project. The group says it is “discovering dozens of shocking new threats and impacts that have been released to the public for the first time”. “The extent of information that appears to have been kept back is alarming, with loss of amenity and traffic

noise, emissions and congestion now added to the growing list of disastrous impacts that are buried among the volumes of reports,” Julia Stockigt of Save Westernport said. “According to AGL, 900 tanker trucks carrying liquid nitrogen would need to travel along Peninsula Link, Coolart and Frankston-Flinders roads and through the town of Crib Point each year if their gas import project is approved. A further fleet would deliver flammable LNG treatment chemicals to the site at Woolleys Beach, in a known bushfire zone” The rush to prepare objections to AGL’s plan follows the refusal by Planning Minister Richard Wynne to postpone or extend the EES process until after the COVID-19 crisis. Mr Wynne said any further delay would “introduce severe procedural uncertainty” and “add to … the stresses for all parties”. He said that “on bal-

industrialisation of Crib Point generally,” Mr Hunt said. “There are much more appropriate gas projects under consideration, such as in Port Kembla NSW. I continue to urge the Victorian government to listen to the community and allow for appropriate time for review of this project.” Mr Hunt’s state Liberal colleague, Hastings MP Neale Burgess, said it was unfair that AGL had two years to prepare is EES and “then a community placed in strict lockdown conditions has only been given 40 business days to respond”. Environmental Justice Australia says the public exhibition of the EES should be extended because the COVID-19 restrictions “curtail the public’s ability to engage or adequately prepare for the public hearings”. EJA’s principal lawyer Nick Witherow contrasted the government’s refusal for an extension with the extra

ance” the benefits of a pause did not “outweigh the disadvantages”. His refusal to add extra time for submissions (deadline 26 August) or postpone the October hearing by Planning Panels Victoria has been criticised by all levels of government and community groups. Mornington Peninsula Shire councillors are this week expected to reaffirm their opposition to AGL’s plans “as the project poses unacceptable impacts and associated risks across a range of areas”. The shire is holding an online “community session” on Wednesday (19 August) to explain its position and provide information “to help residents have their say on the project”. Flinders MP Greg Hunt said he was “deeply disappointed” by Mr Wynne’s decision but would continue to fight against the project. “My long held view remains against the proposed AGL project and the re-

with chips (as above)

12 months AGL had been granted to submit the EES. Ms Stockigt said AGL also planned to stop public access to Woolleys Beach Foreshore Reserve. “The quiet, shady public reserve is a popular place for a barbecue, launch a kayak or walk the dog,” she said. Ms Stockigt said “other alarming EES discoveries” included the high noise levels from a pumping station that, according to AGL could lead to residents experiencing “reduced satisfaction with their residential amenity”, plans to build 20 metre high tanks to store nitrogen and other chemicals, the creation of few long term jobs except 40 technical jobs on the floating gas terminal. The deadline for submissions on AGL’s plans is 26 August. Visit: savewesternport.org/; or, engage.vic. gov.au/crib-point-IAC