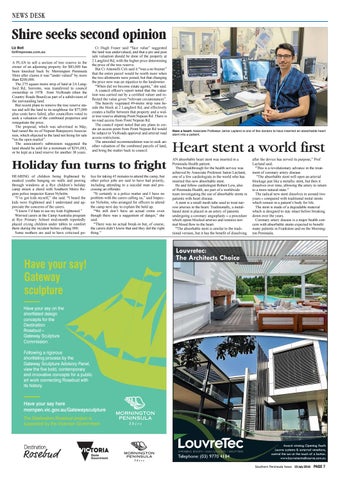 Shire seeks second opinion Liz Bell liz@mpnews.com.au A PLAN to sell a section of tree reserve to the owner of an adjoining property for $83,000 has been knocked back by Mornington Peninsula Shire after claims it was “under valued” by more than $200,000. The 275 square metre strip of land at 2A Langford Rd, Sorrento, was transferred to council ownership in 1978 from VicRoads (then the Country Roads Board) as part of a subdivision of the surrounding land. But recent plans to remove the tree reserve status and sell the land to its neighbour for $77,000 plus costs have failed, after councillors voted to seek a valuation of the combined properties and renegotiate the price. The proposal, which was advertised in May, had raised the ire of Nepean Ratepayers Association, which objected to the land not being for sale “on the open market”. The association's submission suggested the land should be sold for a minimum of $291,083, or be kept as a land reserve for another 38 years.

Cr Hugh Fraser said “face value” suggested the land was undervalued, and that a pre and post sale valuation should be done of the property at 2 Langford Rd, with the higher price determining the price of the tree reserve. But Cr Antonelli Celi said it “was a no brainer” that the entire parcel would be worth more when the two allotments were joined, but that changing the price now was an injustice to the landowner. “When did we become estate agents,” she said. A council officer's report noted that the valuation was carried out by a certified valuer and reflected the value given “relevant circumstances”. The heavily vegetated 49-metre strip runs beside the block at 2 Langford Rd, and effectively creates a buffer between that property and a wider tree reserve abutting Point Nepean Rd. There is no road access from Point Nepean Rd. The council report noted that any plans to create an access point from Point Nepean Rd would be subject to VicRoads approval and arterial road access restrictions. The amended recommendation was to seek another valuation of the combined parcels of land, and bring the matter back to council.

Holiday fun turns to fright HEARING of children being frightened by masked youths banging on walls and peering through windows at a Rye children’s holiday camp struck a chord with Southern Metro Region police inspector Karen Nyholm. “I’ve got kids myself,” she said. “I heard the kids were frightened and I understand and appreciate the concerns of the carers. “I know I’d hate to see my kids frightened.” Worried carers at the Camp Australia program at Rye Primary School mid-month reportedly placed crying children under tables to comfort them during the incident before calling 000. Some mothers are said to have criticised po-

lice for taking 45 minutes to attend the camp, but other police jobs are said to have had priority, including attending to a suicidal man and processing an offender. “It certainly is a police matter and I have no problem with the carers calling us,” said Inspector Nyholm, who arranged for officers to attend the camp next day to explain the hold up. “We still don’t have an actual crime even though there was a suggestion of danger,” she said. “There was no actual break-in but, of course, the carers didn’t know that and they did the right thing.”

Have your say! Gateway sculpture

Have a heart: Associate Professor Jamie Layland is one of few doctors to have inserted an absorbable heart stent into a patient.

Heart stent a world first AN absorbable heart stent was inserted in a Peninsula Health patient. This breakthrough for the health service was achieved by Associate Professor Jamie Layland, one of a few cardiologists in the world who has inserted this new absorbable stent. He and fellow cardiologist Robert Lew, also of Peninsula Health, are part of a worldwide team investigating the use of absorbable stents in patients with heart disease. A stent is a small mesh tube used to treat narrow arteries in the heart. Traditionally, a metalbased stent is placed in an artery of patients undergoing a coronary angioplasty – a procedure which opens blocked arteries and restores normal blood flow to the heart. “The absorbable stent is similar to the traditional version, but it has the benefit of dissolving

after the device has served its purpose,” Prof Layland said. "This is a revolutionary advance in the treatment of coronary artery disease. "The absorbable stent will open an arterial blockage just like a metallic stent, but then it dissolves over time, allowing the artery to return to a more natural state.” The radical new stent dissolves in around two years – compared with traditional metal stents which remain in a patient’s body for life. The stent is made of a degradable material which is designed to stay intact before breaking down over the years. Coronary artery disease is a major health concern with absorbable stents expected to benefit many patients in Frankston and on the Mornington Peninsula.

Have your say here mornpen.vic.gov.au/Gatewaysculpture The Destination Rosebud project is supported by the Victorian Government