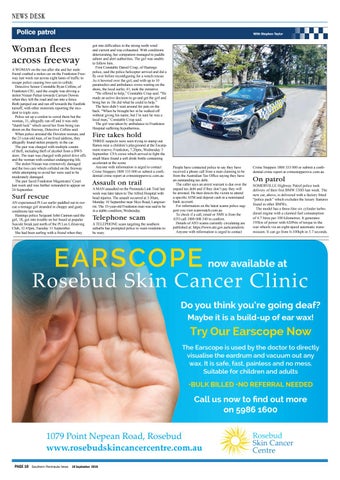 Woman flees across freeway A WOMAN on the run after she and her male friend crashed a stolen car on the Frankston Freeway last week ran across eight lanes of traffic to escape police causing two cars to collide. Detective Senior Constable Ryan Collins, of Frankston CIU, said the couple was driving a stolen Nissan Pulsar towards Carrum Downs when they left the road and ran into a fence. Both jumped out and ran off towards the Eastlink turnoff, with other motorists reporting the incident to triple zero. Police set up a cordon to corral them but the woman, 31, allegedly ran off and it was only “dumb luck” which saved her from being run down on the freeway, Detective Collins said. When police arrested the Doveton woman, and the 21-year-old man, of no fixed address, they allegedly found stolen property in the car. The pair was charged with multiple counts of theft, including theft of alcohol from a BWS store. The man was charged with petrol drive offs and the woman with conduct endangering life. The stolen Nissan was extensively damaged and the two cars which collided on the freeway while attempting to avoid her were said to be moderately damaged. The pair faced Frankston Magistrates’ Court last week and was further remanded to appear on 24 September.

AN experienced Pt Leo surfer paddled out to rescue a teenage girl stranded in choppy and gusty conditions last week. Hastings police Sergeant John Cannon said the girl, 18, got into trouble on her board at popular Suicide break just north of the Pt Leo Lifesaving Club, 12.45pm, Tuesday 11 September. She had been surfing with a friend when they

got into difficulties in the strong north wind and current and was exhausted. With conditions deteriorating, her companion managed to paddle ashore and alert authorities. The girl was unable to follow him. First Constable Daniel Crisp, of Hastings police, said the police helicopter arrived and did a fly over before reconfiguring for a winch rescue. As it hovered over the girl, and with up to 10 paramedics and ambulance crews waiting on the shore, the local surfer, 41, took the initiative. “He offered to help,” Constable Crisp said. “He made an active decision to go and get the girl and bring her in. He did what he could to help.” The hero didn’t wait around for pats on the back. “When he brought her in he walked off without giving his name, but I’m sure he was a local man,” Constable Crisp said. The girl was taken by ambulance to Frankston Hospital suffering hypothermia.

THREE suspects were seen trying to stamp out flames near a children’s playground at the Escarpment reserve, Frankston, 7.20pm, Wednesday 5 September. CFA crews which arrived to fight the small blaze found a soft drink bottle containing accelerant at the scene. Anyone with information is urged to contact Crime Stoppers 1800 333 000 or submit a confidential crime report at crimestoppersvic.com.au

A MAN assaulted on the Peninsula Link Trail last week was later taken to The Alfred Hospital with head injuries. The assault occurred at 3.30am, Monday 10 September near Skye Road, Langwarrin. The 33-year-old Frankston man was said to be in a stable condition, Wednesday.

A TELEPHONE scam targeting the southern suburbs has prompted police to warn residents to be wary.

People have contacted police to say they have received a phone call from a man claiming to be from the Australian Tax Office saying they have an outstanding tax debt. The caller says an arrest warrant is due over the unpaid tax debt and if they don’t pay they will be arrested. He then directs the victim to attend a specific ATM and deposit cash in a nominated bank account. For information on the latest scams police suggest you visit scamwatch.com.au To check if a call, email or SMS is from the ATO call 1800 008 540 to confirm. Details of ATO scams currently circulating are published at: https://www.ato.gov.au/scamalerts Anyone with information is urged to contact

Crime Stoppers 1800 333 000 or submit a confidential crime report at crimestoppersvic.com.au

SOMERVILLE Highway Patrol police took delivery of their first BMW 530D last week. The new car, above, is delivered with a factory fitted “police pack” which excludes the luxury features found in other BMWs. The model has a three-litre six cylinder turbodiesel engine with a claimed fuel consumption of 4.7 litres per 100 kilometres. It generates 195kw of power with 620Nm of torque to the rear wheels via an eight-speed automatic transmission. It can go from 0-100kph in 5.7 seconds.

Rosebud Skin Cancer Clinic Do you think you’re going deaf? Maybe it is a build-up of ear wax!

Try Our Earscope Now The Earscope is used by the doctor to directly visualise the eardrum and vacuum out any wax. It is safe, fast, painless and no mess. Suitable for children and adults