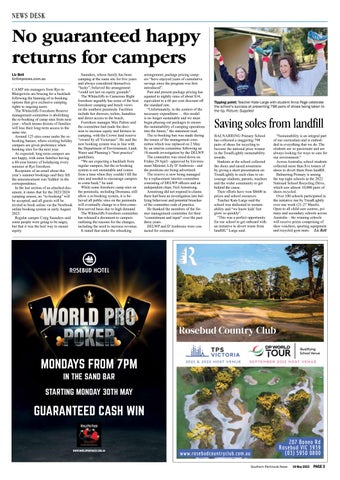 No guaranteed happy returns for campers Liz Bell liz@mpnews.com.au CAMP site managers from Rye to Blairgowrie are bracing for a backlash following the banning of re-booking options that give exclusive camping rights to ongoing users. The Whitecliffs Foreshore Reserve management committee is abolishing the re-booking of camp sites from next year - which means dozens of families will lose their long-term access to the same site. Around 125 sites come under the rebooking banner, where existing holiday campers are given preference when booking sites for the next year. As expected, long-term campers are not happy, with some families having a 40-year history of holidaying every summer at Rye foreshore. Recipients of an email about this year’s summer bookings said they felt the announcement was &#39;hidden&#39; in the correspondence. In the last section of an attached document, it states that for the 2023/2024 camping season, no “re-booking” will be accepted, and all guests will be invited to book online via the Newbook online booking system in early August 2023. Regular camper Craig Saunders said some people were going to be angry, but that it was the best way to ensure equity.

Saunders, whose family has been camping at the same site for five years and always considered themselves “lucky”, believed the arrangement “could not last on equity grounds”. The Whitecliffs to Camerons Bight foreshore arguably has some of the best foreshore camping and beach views on the southern peninsula. Facilities include hot showers, toilets, laundries and direct access to the beach. Foreshore manager Max Patton said the committee had made the decision to increase equity and fairness in camping, with the Crown land reserve “owned by all Victorians”. He said the new booking system was in line with the Department of Environment, Land, Water and Planning’s ”best practice” guidelines. “We are expecting a backlash from regular campers, but the re-booking system is not sustainable and comes from a time when they couldn’t fill the sites and needed to encourage campers to come back,” he said. While some foreshore camp sites on the peninsula, including Dromana, still allow a re-booking system, it is believed all public sites on the peninsula will eventually change to a first-comefirst-served basis due to high demand. The Whitecliffs Foreshore committee has released a document to campers outlining the reasons for the changes, including the need to increase revenue. It stated that under the rebooking

arrangement, package pricing campers “have enjoyed years of cumulative savings since the program was first introduced”. Past and present package pricing has equated to nightly rates of about $14, equivalent to a 66 per cent discount off the standard rate. “Unfortunately, in the context of the necessary expenditure … this model is no longer sustainable and we must begin phasing out packages to ensure the sustainability of camping operations into the future,” the statement read. The re-booking ban was made during the tenure of the management committee which was replaced on 2 May by an interim committee following an 18-month investigation by the DELWP. The committee was stood down on Friday 29 April - approved by Environment Minister, Lily D’Ambrosio - and the positions are being advertised. The reserve is now being managed by a replacement interim committee consisting of DELWP officers and an independent chair, Neil Armstrong. Armstrong did not respond to claims there had been an investigation into bullying behaviour and potential breaches of the committee code of practice. He thanked the members of the former management committee for their “commitment and input” over the past three years. DELWP and D’Ambrosio were contacted for comment.

Saving soles from landfill BALNARRING Primary School has collected a staggering 798 pairs of shoes for recycling to become the national prize winner in the TreadLightly sustainability awards. Students at the school collected the shoes and raised awareness by giving a short presentation on TreadLightly to each class to encourage students, parents, teachers and the wider community to get behind the cause. Their efforts have won $8600 in prizes and school resources. Teacher Kate Large said the school was dedicated to sustainability and “we know kids&#39; feet grow so quickly”. “This was a perfect opportunity for our school to get onboard with an initiative to divert waste from landfill,” Large said.

“Sustainability is an integral part of our curriculum and is embedded in everything that we do. The students are so passionate and are always looking for ways to care for our environment.” Across Australia, school students collected more than five tonnes of shoes to divert them from landfill. Balnarring Primary is among the top eight schools in the 2022 National School Recycling Drive, which saw almost 10,000 pairs of shoes recycled. Over 100 schools participated in the initiative run by TreadLightly over one week (21-27 March). Open to all child care centres, primary and secondary schools across Australia – the winning schools will receive prizes comprising of shoe vouchers, sporting equipment and recycled gym mats. Liz Bell

IN THE SAND BAR STARTING MONDAY 30TH MAY