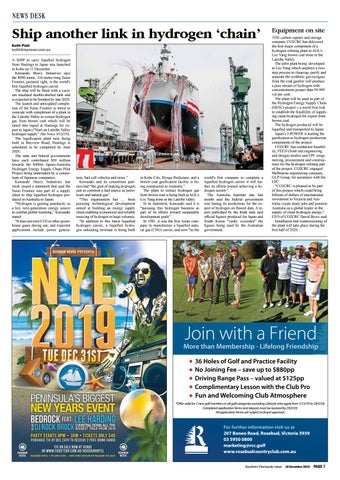 Ship another link in hydrogen ‘chain’ Keith Platt keith@mpnews.com.au A SHIP to carry liquified hydrogen from Hastings to Japan was launched in Kobe on 11 December. Kawasaki Heavy Industries says the 8000 tonne, 116-metre-long Suiso Frontier, pictured right, is the world&#39;s first liquefied hydrogen carrier. The ship will be fitted with a vacuum insulated double-shelled tank and is expected to be finished by late 2020. The launch and anticipated completion of the Suiso Frontier is timed to coincide with completion of a plant in the Latrobe Valley to extract hydrogen gas from brown coal which will be tuned into liquid at Hastings for export to Japan (“Start on Latrobe Valley hydrogen supply” The News 3/12/19). The liquification plant now being built in Bayview Road, Hastings is scheduled to be completed by June 2020. The state and federal governments have each contributed $50 million towards the $400m Japan–Australia Hydrogen Energy Supply Chain Pilot Project being undertaken by a consortium of Japanese companies. Kawasaki Heavy Industries last week issued a statement that said the Suiso Frontier was part of a supply chain to ship liquefied hydrogen produced in Australia to Japan. “Hydrogen is gaining popularity as a key next-generation energy source to combat global warming,” Kawasaki stated. “It does not emit CO2 or other greenhouse gases during use, and expected applications include power genera-

tion, fuel cell vehicles and more.” Kawasaki and its consortium partners had “the goal of making hydrogen just as common a fuel source as petroleum and natural gas”. “This organisation has … been pursuing technological development aimed at building an energy supply chain enabling economical and reliable sourcing of hydrogen in large volumes. “In addition to this latest liquefied hydrogen carrier, a liquefied hydrogen unloading terminal is being built

in Kobe City, Hyogo Prefecture, and a brown coal gasification facility is being constructed in Australia.” The plant to extract hydrogen gas from brown coal is being built at AGL’s Loy Yang mine in the Latrobe valley. In its statement, Kawasaki said it is “pursuing this hydrogen business as part of its efforts toward sustainable development goals”. In 1981, it was the first Asian company to manufacture a liquefied natural gas (LNG) carrier, and now “as the

world&#39;s first company to complete a liquefied hydrogen carrier it will further its efforts toward achieving a hydrogen society”. The Australia Institute late last month said the federal government was basing its predictions for the export of hydrogen on flawed data. A report published by the think tank said official figures produced for Japan and South Korea “vastly exceeded” the figures being used by the Australian government.

Equipment on site THE carbon capture and storage company CO2CRC has delivered the first major component of a hydrogen refining plant to AGL’s Loy Yang brown coal mine in the Latrobe Valley. The pilot plant being developed at Loy Yang which employs a twostep process to clean-up, purify and separate the synthetic gas (syngas) from the coal gasifier will produce a pure stream of hydrogen with concentrations greater than 99.999 vol per cent. The plant will be used as part of the Hydrogen Energy Supply Chain (HESC) project – a world first trial to establish the feasibility of supplying clean hydrogen for export from brown coal. The hydrogen produced will be liquefied and transported to Japan. Japan’s J-POWER is leading the gasification to hydrogen production components of the project. CO2CRC has conducted feasibility, FEED (front end engineering and design) studies and EPC (engineering, procurement and construction) for the hydrogen refining part of the project. CO2CRC engaged Melbourne engineering company, GLP Group, for assistance with the EPC. “CO2CRC is pleased to be part of this project which could bring billions of dollars of international investment to Victoria and Australia, create many jobs and position Australia as a global leader in the supply of clean hydrogen energy,” CEO of CO2CRC David Byers said. Installation and commissioning of the plant will take place during the first half of 2020.

Join with a Friend

More than Membership - Lifelong Friendship 36 Holes of Golf and Practice Facility No Joining Fee – save up to $880pp Driving Range Pass – valued at $125pp Complimentary Lesson with the Club Pro Fun and Welcoming Club Atmosphere *Oﬀer valid for 2 new golf members in all golf categories excluding Lifestyle who apply from 1/12/19 to 29/2/20. Completed application forms and deposit must be received by 29/2/20. All application forms are subject to Board approval.