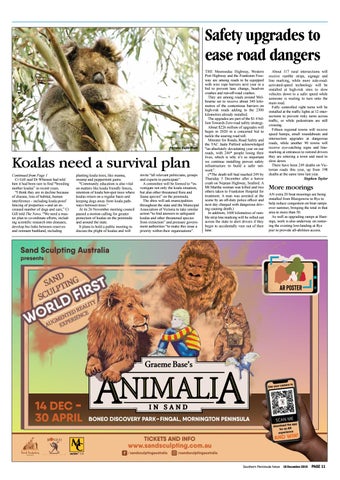 Koalas need a survival plan Continued from Page 1 Cr Gill said Dr Whisson had told him it had been rare to find “breeding mother koalas” in recent years. “I think they are in decline because of disease, loss of habitat, human interference - including koala proof fencing of properties – and an increased number of dogs and cars,” Cr Gill told The News. “We need a master plan to co-ordinate efforts, including scientific research into diseases; develop bio links between reserves and remnant bushland, including

planting koala trees, like manna, swamp and peppermint gums. “Community education is also vital on matters like koala friendly fences, retention of koala hot-spot trees where koalas return on a regular basis and keeping dogs away from koala pathways between trees.” At its 26 November meeting council passed a motion calling for greater protection of koalas on the peninsula and around the state. It plans to hold a public meeting to discuss the plight of koalas and will

invite “all relevant politicians, groups and experts to participate”. A committee will be formed to “investigate not only the koala situation, but also other threatened flora and fauna species” on the peninsula. The shire will ask municipalities throughout the state and the Municipal Association of Victoria to take similar action “to find answers to safeguard koalas and other threatened species from extinction” and pressure government authorities “to make this issue a priority within their organisations”.

THE Moorooduc Highway, Western Port Highway and the Frankston Freeway are among roads to be equipped with wire rope barriers next year in a bid to prevent lane change, head-on crashes and run-off-road crashes. They are among roads around Melbourne set to receive about 340 kilometres of the contentious barriers on high-risk roads adding to the 2300 kilometres already installed. The upgrades are part of the $1.4 billion Towards Zero road safety strategy. About $226 million of upgrades will begin in 2020 in a concerted bid to tackle the soaring road toll. Minister for Roads, Road Safety and the TAC Jaala Pulford acknowledged “an absolutely devastating year on our roads, with 246* people losing their lives, which is why it’s so important we continue installing proven safety infrastructure to build a safer network”. (*The death toll had reached 249 by Thursday 5 December after a horror crash on Nepean Highway, Seaford. A Mt Martha woman was killed and two others taken to Frankston Hospital for treatment. A man was arrested at the scene by an off-duty police officer and next day charged with dangerous driving causing death.) In addition, 1600 kilometres of rumble strip line marking will be rolled out across the state to alert drivers if they begin to accidentally veer out of their lane.

About 117 rural intersections will receive rumble strips, signage and line marking, while more side-roadactivated-speed technology will be installed at high-risk sites to slow vehicles down to a safer speed while someone is waiting to turn onto the main road. Fully controlled right turns will be installed at the traffic lights at 12 intersections to prevent risky turns across traffic, or while pedestrians are still crossing. Fifteen regional towns will receive speed humps, small roundabouts and intersection upgrades at dangerous roads, while another 90 towns will receive eye-catching signs and linemarking at entrances to remind drivers they are entering a town and need to slow down. There have been 249 deaths on Victorian roads this year, up from 198 deaths at the same time last year. Stephen Taylor

More moorings AN extra 20 boat moorings are being installed from Blairgowrie to Rye to help reduce congestion on boat ramps over summer, bringing the total in that area to more than 50. As well as upgrading ramps at Hastings, work is also underway on restoring the existing low-landing at Rye pier to provide all-abilities access.