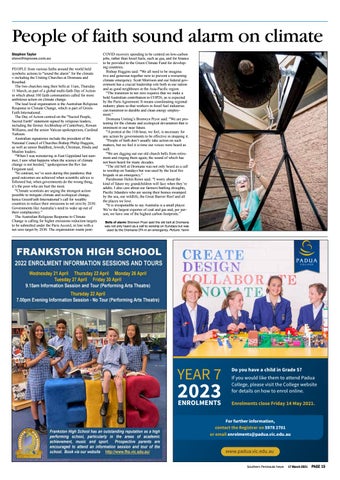 People of faith sound alarm on climate Stephen Taylor steve@mpnews.com.au PEOPLE from various faiths around the world held symbolic actions to “sound the alarm” for the climate – including the Uniting Churches at Dromana and Rosebud. The two churches rang their bells at 11am, Thursday 11 March, as part of a global multi-faith Day of Action in which about 100 faith communities called for more ambitious action on climate change. The lead local organisation is the Australian Religious Response to Climate Change, which is part of GreenFaith International. The Day of Action centred on the “Sacred People, Sacred Earth” statement signed by religious leaders, including the former Archbishop of Canterbury, Rowan Williams, and the senior Vatican spokesperson, Cardinal Turkson. Australian signatories include the president of the National Council of Churches Bishop Philip Huggins, as well as senior Buddhist, Jewish, Christian, Hindu and Muslim leaders. “When I was ministering in East Gippsland last summer, I saw what happens when the science of climate change is not heeded,” spokesperson the Rev Ian Ferguson said. “In contrast, we’ve seen during this pandemic that good outcomes are achieved when scientific advice is followed but, when governments do the wrong thing, it’s the poor who are hurt the most. “Climate scientists are urging the strongest action possible to mitigate climate and ecological change, hence GreenFaith International’s call for wealthy countries to reduce their emissions to net zero by 2030. Governments like Australia’s need to wake up out of their complacency.” The Australian Religious Response to Climate Change is calling for higher emissions reduction targets to be submitted under the Paris Accord, in line with a net zero target by 2030. The organisation wants post-

Do you have a child in Grade 5?

If you would like them to attend Padua College, please visit the College website for details on how to enrol online.

For further information, contact the Registrar on 5978 2701 or email enrolments@padua.vic.edu.au