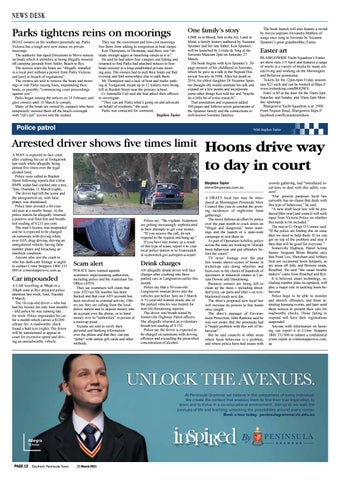 Parks tightens reins on moorings BOAT owners on the southern peninsula say Parks Victoria has a tough new new stance on private moorings. The authority has taped Directions to Move notices on boats which it identifies as being illegally moored off camping grounds from Safety Beach to Rye. The notices warn the boats are “illegally installed in a local port without a permit from Parks Victoria and [are] in breach of regulations”. The owners are told to remove the boats and moorings or risk Parks issuing fines, impounding their boats, or possibly “commencing court proceedings against you”. Parks began issuing the notices on 24 February and gave owners until 10 March to comply. Many of the boats are owned by campers who have temporarily moored them off the beach overnight with “rat’s tail” screws into the seabed.

They say the convenient and low-cost moorings free them from adding to congestion at boat ramps. Ken Thompson, of Dromana, said there was “already enough aggro at launching ramps as it is”. He said he had taken four campers out fishing and returned to find Parks had attached notices to four boats moored in a long-established private mooring area. The owners had to pull their boats out that evening and find somewhere else to park them. Mr Thompson said a lack of boat and trailer parking at Tootgarook meant up to 12 trailers were being left in Burdett Street near the primary school. Cr Antonella Celi said she had asked shire officers to investigate. “They can ask Parks what’s going on and advocate on behalf of residents,” she said. Parks was contacted for comment. Stephen Taylor

LIME in in Blood, Salt in the Air, Land in Mind, a family history authored by Suzanne Spunner and her late father, Ken Spunner, will be launched by Ursula de Jong at the Sorrento Museum 2pm on Saturday 27 March. The book begins with Ken Spunner’s 30page memoir of his childhood in Sorrento, which he gave as a talk to the Nepean Historical Society in 1998. After his death in 2016, his eldest daughter Dr Suzanne Spunner thought she would annotate his talk and expand on a few points and incorporate some other things Ken told her and “maybe do a little bit of extra research”. That annotation and expansion added 300 pages and follows seven generations of the Spunner family and the connections to well-known Sorrento families.

Car impounded A CAR travelling at 98kph in a 50kph zone at Rye attracted police attention last week, 6am, Tuesday 9 March. The 18-year-old driver – who has had his licence for only four months - told police he was running late for work. Police impounded his car for a month which carries a $1200 release fee. A roadworthy check found a bald tyre (right). The driver will be summonsed to appear at court for excessive speed and driving an unroadworthy vehicle.

Easter art BLAIRGOWRIE Yacht Squadron’s Easter art show runs 2-5 April and features a range of works in a variety of media by many artists living and working on the Mornington and Bellarine peninsulas. Tickets for the 12pm-6pm Friday session rare $25 each and can be booked at https:// www.trybooking.com/BOQWX. Entry is $5 at the door for the 10am-5pm Saturday and Sunday and 10am-2pm Monday openings. Blairgowrie Yacht Squadron is at 2900 Point Nepean Road, Blairgowrie https:// facebook.com/byseasterartshow.

Arrested driver shows five times limit A MAN is expected to face court after crashing his car at Tootgarook last week while allegedly being almost five times over the legal alcohol limit. Police were called to Burdett Street following reports that a blue BMW sedan had crashed into a tree, 7pm, Thursday 11 March (right). The driver had left the scene and the unregistered car, with false plates, was abandoned. Police later arrested a 60-yearold man at a nearby house. At the police station he allegedly returned a positive oral fluid test and breathtest reading of 0.233 per cent. The man’s licence was suspended and he is expected to be charged on summons with driving while over 0.05, drug driving, driving an unregistered vehicle, having false number plates and breaching an interlock condition. Anyone who saw the crash or who has dash-cam footage is urged to contact Crime Stoppers 1800 333 000 or crimestoppersvic.com.au

The book launch will also feature a recital by mezzo soprano Alexandra Mathew of songs once sung in Sorrento by Suzanne Spunner’s great grandmother, Fanny.

Police say: “Be vigilant. Scammers are getting increasingly sophisticated in their attempts to get your money. “If you receive the call, do not respond to the request and hang up.” If you have lost money as a result of this type of scam, report it to your local police station or to Scamwatch at scamwatch.gov.au/report-a-scam\

Scam alert POLICE have warned against scammers impersonating authorities, including police and the Australian Tax Office (ATO). They say scammers will claim that your ATO tax file number has been hacked and that your ATO account has been involved in criminal activity. Others say they are calling from the local police station and to deposit money into an account over the phone, or to hand money over to “authorities” in person at a meet-up point. Victims are told to verify their personal and banking information over the phone and that they can pay “debts” with online gift cards and other methods.

AN allegedly drunk driver will face charges after crashing into three parked cars in Langwarrin earlier this month. Police say that a 50-year-old Langwarrin woman drove into the vehicles just before 3pm on 3 March. A 51-year-old woman inside one of the parked vehicles was treated for non-life-threatening injuries. The driver was breath tested by Somerville Highway Patrol officers. She allegedly returned an evidentiary breath test reading of 0.152. Police say the driver is expected to be charged on summons with driving offences and exceeding the prescribed concentration of alcohol.

A DRAFT local law may be introduced at Mornington Peninsula Shire Council this year to combat the growing incidences of night-time hoon gatherings. The move follows an effort by police over the past month to crack down on “illegal and dangerous” hoon meetings and the launch of a state-wide campaign to rein them in. As part of Operation Achilles, police across the state are working to “disrupt hoon behaviour and put offenders before the courts”. TV news’ footage over the past few weeks shows scores of hoons in tricked-up cars doing wheelies and burn-outs to the cheers of hundreds of spectators at industrial estates in Carrum Downs and Dandenong. Business owners are being left to clean up the mess – including shredded tyres, car parts and litter – on tyreblackened roads next day. The shire’s proposed new local law will increase its powers to fine hoons once caught. The shire’s manager of Environment Protection, John Rankine said he was not aware that the peninsula had a “major problem with this sort of behaviour”. But he said councils in other areas where hoon behaviour is a problem, and where police have had issues with

crowds gathering, had “introduced local laws to deal with this safety concern”. “Our general purposes local law currently has no clause that deals with this type of behaviour,” he said. “A new draft local law will be produced [this year] and council will seek input from Victoria Police on whether this needs to be included.” The mayor Cr Despi O’Connor said: “If the police are finding this an issue then we need to help them. If we can get on top of the problem and stop it then that will be good for everyone.” Somerville Highway Patrol Acting Senior Sergeant Brian Bourke says that Point Leo, Shoreham and Arthurs Seat are occasional hoon hotspots, as are areas off Jetty and Browns roads, Rosebud. He said “the usual trouble makers” came from Rosebud and Rye. It is believed smart technology, including number plate recognition, will play a major role in tackling hoon behaviour. Police hope to be able to monitor and identify offenders, and those attending hooning events, and later send them notices to present their cars for roadworthy checks. Those failing to respond will have their registrations suspended. Anyone with information on hooning can report it to Crime Stoppers 1800 333 000 or submit a confidential crime report at crimestoppersvic.com. au

UNLOCK THE AVENUES. At Peninsula Grammar we believe in the uniqueness of every individual. We create the context that enables them to find their true inspiration, to learn and to thrive in a co-educational environment. Join us as we walk the avenues of life and learning, unlocking the possibilities around every corner. Book a tour today. peninsulagrammar.vic.edu.au