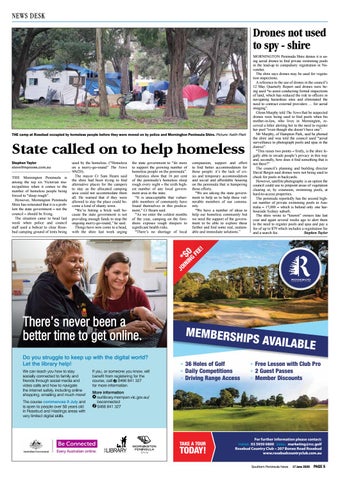 Drones not used to spy - shire

THE camp at Rosebud occupied by homeless people before they were moved on by police and Mornington Peninsula Shire. Picture: Keith Platt

the state government to “do more to support the growing number of homeless people on the peninsula”. Statistics show that 16 per cent of the peninsula’s homeless sleep rough every night – the sixth highest number of any local government area in the state. “It is unacceptable that vulnerable members of community have found themselves in this predicament,” Cr Hearn said. “As we enter the coldest months of the year, camping on the foreshore exposes rough sleepers to significant health risks. “There’s no shortage of local

compassion, support and effort to find better accommodation for these people: it’s the lack of crisis and temporary accommodation and social and affordable housing on the peninsula that is hampering these efforts. “We are asking the state government to help us to help these vulnerable members of our community. “We have a number of ideas to help our homeless community but we need the support of the government to be able to explore these further and find some real, sustainable and immediate solutions.”

THE Mornington Peninsula is among the top six Victorian municipalities when it comes to the number of homeless people being forced to “sleep rough”. However, Mornington Peninsula Shire has reiterated that it is a problem the state government – not the council – should be fixing. The situation came to head last week when police and council staff used a bobcat to clear Rosebud camping ground of tents being

used by the homeless. (“Homeless on a merry-go-round” The News 9/6/20). The mayor Cr Sam Hearn said the shire had been trying to find alternative places for the campers to stay as the allocated camping area could not accommodate them all. He warned that if they were allowed to stay the place could become a kind of shanty town. “We’re hitting a brick wall because the state government is not providing enough funds to stop the ongoing merry-go-round,” he said. Things have now come to a head, with the shire last week urging

MORNINGTON Peninsula Shire denies it is using aerial drones to find private swimming pools in the lead-up to compulsory registration in November. The shire says drones may be used for vegetation inspections. A reference to the use of drones in the council’s 12 May Quarterly Report said drones were being used “to assist conducting formal inspections of land, which has reduced the risk to officers in navigating hazardous sites and eliminated the need to contract external providers … for aerial imaging”. Glenn Murphy told The News that he suspected drones were being used to find pools when his mother-in-law, who lives in Mornington, received a letter alerting her to the need to register her pool “even though she doesn’t have one”. Mr Murphy, of Hampton Park, said he phoned the shire and was told the council used “aerial surveillance to photograph pools and spas in the district”. “This raises two points – firstly, is the shire legally able to invade people’s privacy in this way and, secondly, how does it find something that is not there?” The council’s planning and building director David Bergin said drones were not being used to check for pools in backyards. However, satellite photography is an option the council could use to pinpoint areas of vegetation clearing or, by extension, swimming pools, at hard-to-access properties. The peninsula reportedly has the second highest number of private swimming pools in Australia – 17,000 – which is behind only one harbourside Sydney suburb. The shire wrote to “known” owners late last year and again several weeks ago to alert them to the need to register pools and spas and pay a fee of up to $79 which includes a registration fee and a search fee. Stephen Taylor

There’s never been a better time to get online. Do you struggle to keep up with the digital world? Let the library help! We can teach you how to stay socially connected to family and friends through social media and video calls and how to navigate the internet safely, including online shopping, emailing and much more! The course commences 9 July and is open to people over 50 years old in Rosebud and Hastings areas with very limited digital skills.

If you, or someone you know, will benefit from registering for the course, call 0466 841 327 for more information.