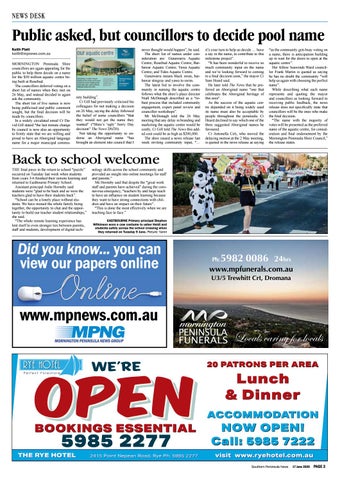 Public asked, but councillors to decide pool name Keith Platt keith@mpnews.com.au MORNINGTON Peninsula Shire councillors are again appealing for the public to help them decide on a name for the $50 million aquatic centre being built at Rosebud. The councillors deferred voting on a short list of names when they met on 26 May, and instead decided to again ask the community. The short list of five names is now being publicised and public comment sought, but the final decision will be made by councillors. In a widely circulated email Cr David Gill stated “the last minute change by council is now also an opportunity to firmly state that we are willing and proud to have an Aboriginal language name for a major municipal commu-

nity building”. Cr Gill had previously criticised his colleagues for not making a decision on 26 May, saying the delay followed the belief of some councillors “that they would not get the name they wanted” (“Shire’s ‘ugly’ Sorry Day decision” The News 2/6/20). Not taking the opportunity to endorse an Aboriginal name “has brought an element into council that I

it’s your turn to help us decide … have a say in the name, to contribute to this milestone project”. “It has been wonderful to receive so much community input on the name and we’re looking forward to coming to a final decision soon,” the mayor Cr Sam Heard said. He later told The News that he preferred an Aboriginal name &quot;one that celebrates the Aboriginal heritage of this area&quot;. As the success of the aquatic centre depended on it being widely used its name must also be acceptable by people throughout the peninsula. Cr Heard declined to say which one of the three suggested Aboriginal names he favoured. Cr Antonella Celi, who moved the delaying motion at the 2 May meeting, is quoted in the news release as saying

“as the community gets busy voting on a name, there is anticipation building up in wait for the doors to open at the aquatic centre”. Her fellow Seawinds Ward councillor Frank Martin is quoted as saying he has no doubt the community “will help us again with choosing the perfect name”. While describing what each name represents and quoting the mayor and councillors as looking forward to receiving public feedback, the news release does not specifically state that councillors will be the ones who make the final decision. “The name with the majority of votes will be presented as the preferred name of the aquatic centre, for consideration and final endorsement by the Mornington Peninsula Shire Council,” the release states.

Back to school welcome

THE final piece in the return to school “puzzle” occurred on Tuesday last week when students from years 3-6 finished their remote learning and returned to Eastbourne Primary School. Assistant principal Jodie Hornsby said students were “glad to be back and so were the teachers glad to have their students back”. “School can be a lonely place without students. We have missed the whole family being together, the opportunity to chat and the opportunity to build our teacher student relationships,” she said. “The whole remote learning experience has lent itself to even stronger ties between parents, staff and students, development of digital tech-

nology skills across the school community and provided an insight into online meetings for staff and parents.” Ms Hornsby said that despite the “great work staff and parents have achieved” during the coronavirus emergency, “teachers by and large teach to have an influence on student learning because they want to have strong connections with children and have an impact on their future”. “This is done the most effectively when we are teaching face to face.” EASTBOURNE Primary principal Stephen Wilkinson wore a cow costume to usher Heidi and students safely across the school crossing when they returned on Tuesday 9 June. Picture: Yanni