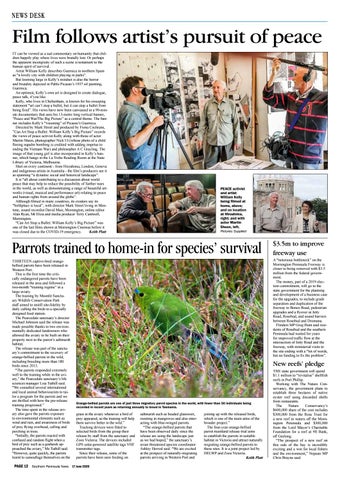 Film follows artist’s pursuit of peace IT can be viewed as a sad commentary on humanity that children happily play where lives were brutally lost. Or perhaps the apparent incongruity of such a scene is testament to the human spirit of survival. Artist William Kelly describes Guernica in northern Spain as “a lovely city with children playing in parks”. But looming large in Kelly’s mindset is also the horror and brutality depicted in Pablo Picasso’s 1937 oil painting, Guernica. An optimist, Kelly’s own art is designed to create dialogue, peace talk, if you like. Kelly, who lives in Cheltenham, is known for his sweeping statement “art can’t stop a bullet, but it can stop a bullet from being fired”. His views have now been canvassed in a 90-minute documentary that uses his 13-metre long vertical banner, &quot;Peace and War/The Big Picture” as a central theme. The banner includes Kelly’s “visioning” of Picasso’s Guernica. Directed by Mark Street and produced by Fiona Cochrane, ”Can Art Stop a Bullet: William Kelly’s Big Picture” records the views of peace activist Kelly along with those of actor Martin Sheen, photographer Nick Ut (whose photo of a child fleeing napalm bombing is credited with adding impetus to ending the Vietnam War) and philosopher A C Grayling. The image of that young girl is also incorporated in Kelly’s banner, which hangs in the La Trobe Reading Room at the State Library of Victoria, Melbourne. Shot on every continent - from Hiroshima, London, Geneva and indigenous artists in Australia - the film’s producers see it as spanning “a dynamic social and historical landscape”. It is “all about contributing to a discussion about world peace that may help to reduce the possibility of further wars in the world, as well as demonstrating a range of beautiful artworks (visual, musical and performance art) relating to peace and human rights from around the globe”. Although filmed in many countries, its creators say its “birthplace is local”, with director Mark Street living in Mentone, sound recordist David Muir, Mornington, online editor Alan Ryan, Mt Eliza and media producer Terry Cantwell, Mornington. “Can Art Stop a Bullet: William Kelly’s Big Picture” was one of the last films shown at Mornington Cinemas before it was closed due to the COVID-19 emergency. Keith Platt

PEACE activist and artist William Kelly being filmed at home, above; and on location at Hiroshima, right; and with actor Martin Sheen, left.

$3.5m to improve freeway use

THIRTEEN captive-bred orangebellied parrots have been released in Western Port. This is the first time the critically endangered parrots have been released in the area and followed a two-month “training regime” in a large aviary. The training by Moonlit Sanctuary Wildlife Conservation Park staff aimed to instill site-fidelity by daily calling the birds to a specially designed food station. The Pearcedale sanctuary’s director Michael Johnson said the release was made possible thanks to two environmentally dedicated landowners who allowed the aviary to be built on their property next to the parrot’s saltmarsh habitat. The release was part of the sanctuary’s commitment to the recovery of orange-bellied parrots in the wild, including breeding more than 180 birds since 2013. “The parrots responded extremely well to the training while in the aviary,” the Pearcedale sanctuary’s life sciences manager Lisa Tuthill said. “We consulted several international and local animal behaviourists to tailor a program for the parrots and we are thrilled with how the pre-release training progressed.” The time spent in the release aviary also gave the parrots exposure to environmental elements such as wind and rain, and awareness of birds of prey flying overhead, calling and perching in trees. “Initially, the parrots reacted with confused and random flight when a bird of prey such as a goshawk approached the aviary,” Ms Tuthill said. “However, quite quickly, the parrots learnt to camouflage themselves on the

A “notorious bottleneck” on the Mornington Peninsula Freeway is closer to being removed with $3.5 million from the federal government. The money, part of a 2019 election commitment, will go to the state government for the planning and development of a business case for the upgrades, to include grade separation and duplication of the freeway to Boneo Road, pedestrian upgrades and a flyover at Jetty Road, Rosebud, and sound barriers between Rosebud and Dromana. Flinders MP Greg Hunt said residents of Rosebud and the southern Peninsula had waited for years for improved traffic flow at the intersection of Jetty Road and the freeway, with ministerial visits to the site ending with a “lot of words, but no funding to fix the problem”.

Orange-bellied parrots are one of just three migratory parrot species in the world, with fewer than 50 individuals being recorded in recent years as returning annually to breed in Tasmania.

grass in the aviary whenever a bird of prey appeared, so the training will help them survive better in the wild.” Tracking devices were fitted to selected birds from the group their release by staff from the sanctuary and Zoos Victoria. The devices included GPS solar-powered satellite tags VHF transmitter tags. Since their release, some of the parrots have been seen feeding on 17 June 2020

saltmarsh such as beaded glasswort, roosting in mangroves and also interacting with blue-winged parrots. “The orange-bellied parrots that have been observed daily since the release are using the landscape just as we had hoped,” the sanctuary’s avian threatened species coordinator Ashley Herrod said. “We are excited at the prospect of naturally-migrating parrots arriving in Western Port and

joining up with the released birds, which is one of the main aims of the broader project.” The four-year orange-bellied parrot mainland release trial aims to establish the parrots in suitable habitat in Victoria and attract naturally migrating orange-bellied parrots to these sites. It is a joint project led by DELWP and Zoos Victoria. Keith Platt

THE state government will spend $1.1 million to “revitalise” shellfish reefs in Port Phillip. Working with The Nature Conservancy, the government plans to establish three hectares of native oyster reef using discarded shells from restaurants. The Nature Conservancy’s $600,000 share of the cost includes $300,000 from the Ross Trust for a new reef in waters off the Mornington Peninsula and $300,000 from the Lord Mayor’s Charitable Foundation for a reef at 9ft Bank, off Geelong. “The prospect of a new reef on this side of the bay is incredibly exciting and a win for local fishers and the environment,” Nepean MP Chris Brayne said.