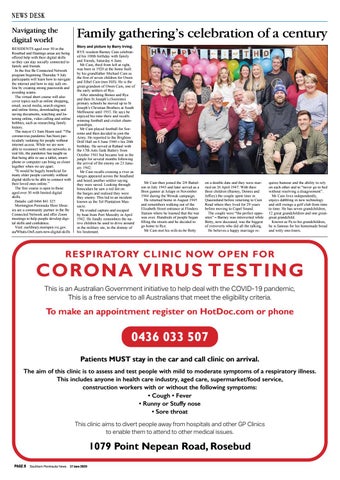 Family gathering’s celebration of a century

Navigating the digital world RESIDENTS aged over 50 in the Rosebud and Hastings areas are being offered help with their digital skills so they can stay socially connected to family and friends. In the free Be Connected Network program beginning Thursday 9 July participants will learn how to navigate the internet and how to stay safe online by creating strong passwords and avoiding scams. The virtual short course will also cover topics such as online shopping, email, social media, search engines and online forms, downloading and saving documents, watching and listening online, video calling and online hobbies, such as researching family history. The mayor Cr Sam Hearn said: “The coronavirus pandemic has been particularly isolating for people without internet access. While we are now able to reconnect with our networks in real life, the pandemic has taught us that being able to use a tablet, smartphone or computer can bring us closer together when we are apart. “It would be hugely beneficial for many older people currently without digital skills to be able to connect with their loved ones online.” The free course is open to those aged over 50 with limited digital skills. Details: call 0466 841 327. Mornington Peninsula Shire libraries are a community partner in the Be Connected Network and offer Zoom meetings to help people develop digital skills and confidence. Visit: ourlibrary.mornpen.vic.gov. au/Whats-On/Learn-new-digital-skills

Story and picture by Barry Irving. RYE resident Barney Cain celebrated his 100th birthday with family and friends, Saturday 6 June. Mr Cain, third from left at right, was born in 1920 at the home built by his grandfather Michael Cain as the first of seven children for Owen and Ethel Cain (nee Hill). He is the great-grandson of Owen Cain, one of the early settlers of Rye. After attending Boneo and Rye and then St Joseph’s (Sorrento) primary schools he moved up to St Joseph’s Christian Brothers at South Melbourne until 1935. He says he enjoyed his time there and recalls winning football and cricket championships. Mr Cain played football for Sorrento and then decided to join the Army. He reported to the Brighton Drill Hall on 6 June 1940 – his 20th birthday. He served at Rabaul with the 17th Anti-Tank Battery from October 1941 but became lost in the jungle for several months following the arrival of the enemy on 23 January 1942. Mr Cain recalls crossing a river as barges appeared across the headland and heard another soldier saying they were saved. Looking through binoculars he saw a red dot on the barges and realised they were they enemy. This led to an incident known as the Tol Plantation Massacre. He evaded capture and escaped by boat from Port Moresby in April 1942. He fondly remembers the native children he used to drive around in the military ute, to the dismay of his lieutenant.

Mr Cain then joined the 2/4 Battalion in July 1943 and later served as a Bren gunner at Aitape in November 1944 during the Wewak campaign. He returned home in August 1945 and remembers walking out of the Elizabeth Street entrance at Flinders Station where he learned that the war was over. Hundreds of people began filling the streets and he decided to go home to Rye. Mr Cain met his wife-to-be Betty

on a double date and they were married on 26 April 1947. With their three children (Barney, Dennis and Jeffrey) the couple spent time in Queensland before returning to Cain Road where they lived for 29 years before moving to Capel Sound. The couple were “the perfect opposites” – Barney was introverted while Betty, now deceased, was the biggest of extroverts who did all the talking. He believes a happy marriage re-

quires humour and the ability to rely on each other and to “never go to bed without resolving a disagreement”. Mr Cain lives independently, enjoys dabbling in new technology and still swings a golf club from time to time. He has seven grandchildren, 12 great grandchildren and one greatgreat grandchild. Known as Pa to his grandchildren, he is famous for his homemade bread and witty one-liners.