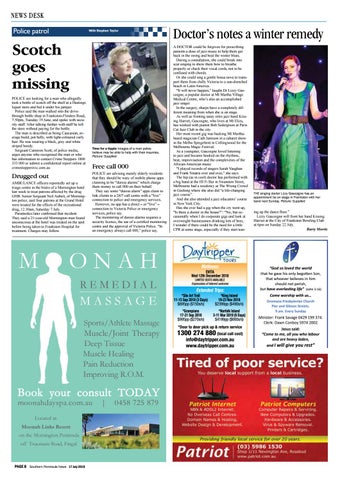 Scotch goes missing POLICE are looking for a man who allegedly took a bottle of scotch off the shelf at a Hastings liquor store and hid it under his jumper. Police said the man walked into the drivethrough bottle shop in Frankston-Flinders Road, 7.50pm, Tuesday 19 June, and spoke with security staff. After talking further with staff he left the store without paying for the bottle. The man is described as being Caucasian, average build, pot belly, with light-coloured curly hair. He was wearing a black, grey and white striped hoody. Sergeant Cameron Scott, of police media, urges anyone who recognised the man or who has information to contact Crime Stoppers 1800 333 000 or submit a confidential report online at crimestoppersvic.com.au

Drugged out AMBULANCE officers reportedly set up a triage centre in the bistro of a Mornington hotel last week to treat patrons affected by the drug GHB. Senior Sergeant Neil Aubert, of Mornington police, said four patrons at the Grand Hotel were treated for the effects of the recreational drug, 12.30am, Saturday 7 July. Paramedics later confirmed that incident. They said a 21-year-old Mornington man found unconscious at the hotel was treated on the spot before being taken to Frankston Hospital for treatment. Charges may follow.

Time for a tipple: Images of a man police believe may be able to help with their inquiries. Picture: Supplied

Free call 000 POLICE are advising mainly elderly residents that they should be wary of mobile phone apps claiming to be “duress alarms” which charge them money to call 000 on their behalf. They say some “duress alarm” apps claim to link clients to a 24/7 call centre with a “live” connection to police and emergency services. However, no app has a direct – or “live” – connection to Victoria Police or emergency services, police say. The monitoring of duress alarms requires a security licence, the use of a certified monitoring centre and the approval of Victoria Police. “In an emergency always call 000,” police say.

Doctor’s notes a winter remedy A DOCTOR could be forgiven for prescribing patients a dose of jazz music to help them get back in the swing and beat the winter blues. During a consultation, she could break into scat singing to show them how to breathe properly or check their vocal cords, not to be confused with chords. Or she could sing a gentle bossa nova to transport them from chilly Victoria to a sun-drenched beach in Latin America. “It will never happen,” laughs Dr Lizzy Gascoigne, a popular doctor at Mt Martha Village Medical Centre, who’s also an accomplished jazz singer. In the surgery, sharps have a completely different meaning from when she is on stage. As well as fronting sassy retro jazz band Kissing Harriet, Gascoigne, who lives at Mt Eliza, has worked with pianist Bob Sedergreen at Paris Cat Jazz Club in the city. Her most recent gig was backing Mt Marthabased magician Cath Jamison in a cabaret show in the Melba Spiegeltent in Collingwood for the Melbourne Magic Festival. As a youngster, Gascoigne loved listening to jazz and became hooked on the rhythms, beat, improvisation and the complexities of the African-American music “I played records of singers Sarah Vaughan and Frank Sinatra over and over,” she says. The hip (as in cool) doctor has performed with a big band at the HI Fi Bar in Swanston Street, Melbourne had a residency at The Wrong Crowd in Geelong where she also did “a life-changing jazz course”. And she also attended a jazz educators’ course in New York City. Has she ever had a gig when the cry went up, “Is there a doctor in the house?”: “No, but occasionally when I do corporate gigs and look at overweight businessmen drinking lots of beer, I wonder if there could be the need for a little CPR at some stage, especially if they start tear-

THE singing doctor Lizzy Gascoigne has an appointment be on stage in Frankston with her band next Sunday. Picture: Supplied

ing up the dance floor.” Lizzy Gascoigne will front her band Kissing Harriet at the City of Frankston Bowling Club at 6pm on Sunday 22 July. Barry Morris

“God so loved the world that he gave his only begotten Son, that whoever believes in him should not perish, but have everlasting life” (John 3:16) Come worship with us… Dromana Presbyterian Church Pier and Gibson Streets. 9 am. Every Sunday