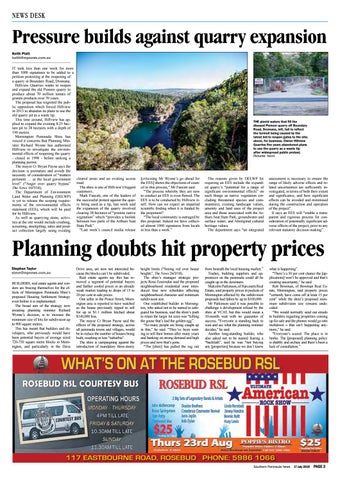 Pressure builds against quarry expansion Keith Platt keith@mpnews.com.au IT took less than one week for more than 1000 signatures to be added to a petition protesting at the reopening of a quarry in Boundary Road, Dromana. Hillview Quarries wants to reopen and expand the old Pioneer quarry to produce about 70 million tonnes of granite products over 70 years. The proposal has reignited the public opposition which forced Hillview in 2013 to abandon its plans to use the old quarry pit as a waste tip. This time around, Hillview has applied to expand the existing 8.25 hectare pit to 38 hectares with a depth of 190 metres. Mornington Peninsula Shire has voiced it concerns that Planning Minister Richard Wynne has authorised Hillview to investigate the environmental effects of reopening the quarry - closed in 1998 - before seeking a planning permit. The mayor Cr Bryan Payne says the decision is premature and avoids the necessity of consideration of “matters pertinent … at the local government level” (“Anger over quarry bypass” The News 10/7/18). The Department of Environment Land Water and Planning (DELWP) is yet to release the scoping requirements of the environmental effects statement (EES), which will be paid for by Hillview. As well as quarrying stone, activities at the site would include crushing, screening, stockpiling, sales and product collection largely using existing

THE placid waters that fill the disused Pioneer quarry off Boundary Road, Dromana, left, fail to reflect the turmoil being caused by the latest bid to reopen gates to the site, above, for business. Owner Hillview Quarries five years abandoned plans to use the quarry as a waste tip after widespread public protest. Pictures: Yanni

cleared areas and an existing access road. The shire is one of Hillview’s biggest customers. Mark Fancett, one of the leaders of the successful protest against the quarry being used as a tip, last week said the expansion of the quarry involved clearing 38 hectares of “pristine native vegetation” which “provides a biolink between two parts of the Arthurs Seat State Park”. “Last week’s council media release

[criticising Mr Wynne’s go ahead for the EES] shows the objections of council to this process,” Mr Fancett said. “The process whereby they are now to conduct an EES is even flawed. The EES is to be conducted by Hillview itself. How can we expect an impartial scientific finding when it is funded by the proponent? “The local community is outraged by this proposal. Indeed we have collected almost 1000 signatures from locals in less than a week.”

The reasons given by DELWP for requiring an EES include the expanded quarry’s “potential for a range of significant environmental effects” on such things as native vegetation (including threatened species and communities); existing landscape values, amenity and land uses of the project area and those associated with the Arthurs Seat State Park; groundwater and surface water; and Aboriginal cultural heritage values. The department says “an integrated

assessment is necessary to ensure the range of likely adverse effects and related uncertainties are sufficiently investigated, in terms of both their extent and significance, and how significant effects can be avoided and minimised during the construction and operation of the project”. It says an EES will “enable a transparent and rigorous process for consideration of potentially significant adverse effects of the project, prior to any relevant statutory decision making”.

Planning doubts hit property prices Stephen Taylor steve@mpnews.com.au BUILDERS, real estate agents and vendors are bracing themselves for the effects of Mornington Peninsula Shire’s proposed Housing Settlement Strategy even before it is implemented. The broad aim of the strategy now awaiting planning minister Richard Wynne’s decision, is to increase the minimum size of lots for subdivision up to 900 square metres. This has meant that builders and developers, who previously would have been potential buyers of average sized 720-750 square metre blocks in Mornington, and particularly in the Dava

Drive area, are now not interested because the blocks can’t be subdivided. Real estate agents say this has removed a segment of potential buyers and further cooled prices in an already weak market leading to drops of 15 to 20 per cent in sale prices. One seller in the Prince Street, Mornington area is reported to have watched as the house previously tipped to sell for up to $1.1 million fetched about $140,000 less. The mayor Cr Bryan Payne said the effects of the proposed strategy, across all peninsula towns and villages, would be to reduce the number of houses being built, resulting in less “suburbia”. The shire is campaigning against the introduction of mandatory three-storey

height limits (“Seeing red over house heights”, The News 26/3/18). The shire’s manager strategic projects Rosa Zouzoulas said the proposed neighbourhood residential zone introduced four new schedules affecting neighbourhood character and minimum subdivision size. One established builder in Mornington, who asked not to be named to safeguard his business, said the shire’s push to retain the larger lot sizes was “killing the goose that’s laid the golden egg”. “So many people are being caught up in this,” he said. “They’ve been waiting to sell their homes after many years and banking on strong demand and high prices and now that’s gone. “The [shire] has pulled the rug out

from beneath the local housing market.” Tradies, building suppliers and apprentices on the peninsula could all be caught up in the downturn. Malcolm Parkinson, of Harcourts Real Estate, said property prices in pockets of Mornington affected by the subdivision proposals had fallen by up to $100,000. Mr Parkinson said it was possible to challenge a development refusal by the shire at VCAT, but this would mean a 10-month wait with no guarantee of success. “Everyone is standing back to wait and see what the planning minister decides,” he said. Another long-standing builder, who also asked not to be named fearing a “backlash”, said he was “not buying any [properties] because we don’t know

what is happening”. “There’s a 50 per cent chance the [applications] won’t be approved and that’s creating uncertainty,” he said. Rob Bowman, of Bowman Real Estate, Mornington, said property prices “certainly have come off at least 15 per cent” while the shire’s proposed minimum subdivision size remains undecided. “We would normally send out emails to builders regarding properties coming up for sale and the phones would go into meltdown – that isn’t happening anymore,” he said. “Everyone’s scared. The place is in limbo. The [proposed] planning policy is shabby and archaic and there’s been a lack of consultation.”