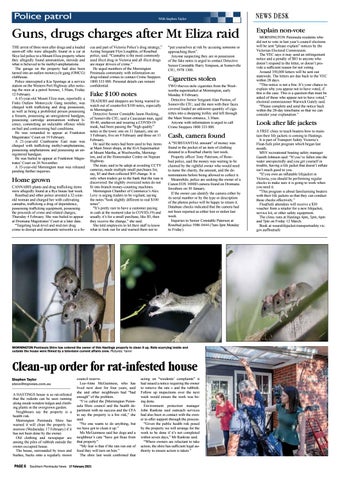 Guns, drugs charges after Mt Eliza raid THE arrest of three men after drugs and a loaded sawn-off rifle were allegedly found in a car at Skye led police to a Mount Eliza property where they allegedly found ammunition, steroids and what is believed to be methyl-amphetamine. The garage on the property had also been turned into an outlaw motorcycle gang (OMCG) clubhouse. Police intercepted a Kia Sportage at a service station on the Western Port Highway after noticing the men at a petrol bowser, 1.50am, Friday 12 February. A 45-year-old Mount Eliza man, reportedly a Finks Outlaw Motorcycle Gang member, was charged with trafficking and drug possession, as well as being a prohibited person possessing a firearm, possessing an unregistered handgun, possessing cartridge ammunition without licence, committing an indictable offence while on bail and contravening bail conditions. He was remanded to appear at Frankston Magistrates’ Court on 19 February. A 21-year-old Cranbourne East man was charged with trafficking methyl-amphetamine, possessing amphetamine and possessing an unregistered handgun. He was bailed to appear at Frankston Magistrates’ Court on 26 November. A 35-year-old Mornington man was released pending further inquiries.

Home grown CANNABIS plants and drug trafficking items were allegedly found at a Rye house last week. Rosebud and other police arrested a 32-yearold woman and charged her with cultivating cannabis, trafficking a drug of dependence, possessing trafficking equipment, possessing the proceeds of crime and related charges, Thursday 4 February. She was bailed to appear at Dromana Magistrates’ Court at a later date. “Targeting local-level and mid-tier drug crime to disrupt and dismantle networks is a fo-

cus and part of Victoria Police’s drug strategy,” Acting Sergeant Flyn Loughlin, of Rosebud police, said. “Cannabis is the most commonly used illicit drug in Victoria and all illicit drugs are major drivers of crime.” He urged members of the Mornington Peninsula community with information on drug-related crimes to contact Crime Stoppers 1800 333 000. Personal details can remain confidential.

Fake $100 notes TRADERS and shoppers are being warned to watch out of counterfeit $100 notes, especially in Mornington. Detective Senior Constable Jason Hocking, of Somerville CIU, said a Caucasian man, aged 30-40, unshaven and wearing a COVID-19 mask, had been passing the “high quality” notes in the town: one on 31 January, one on 3 February, five on 9 February and three on 11 February. He said the notes had been used to buy items at Main Street shops, at the IGA Supermarket at Mount Martha, at Woolworths, Mornington, and at the Homemaker Centre on Nepean Highway. The man, said to be adept at avoiding CCTV cameras, made multiple small purchases for, say, $5 and then collected $95 change. It is only when traders go to the bank that the ruse is discovered: the slightly oversized notes do not fit into branch money-counting machines. Mornington Chamber of Commerce’s Alex Levy is urging traders to be vigilant, saying the notes “look slightly different to real $100 notes”. “It’s pretty rare to have a customer paying in cash at the moment (due to COVID-19) and usually it’s for a small purchase, like $5, then they receive the change,” she said. She told employers to let their staff to know what to look out for and warned them not to

“put yourselves at risk by accusing someone or approaching them”. Anyone suspecting they are in possession of the fake notes is urged to contact Detective Senior Constable Harry Simpson, at Somerville CIU, 5978 1300.

Cigarettes stolen TWO thieves stole cigarettes from the Woolworths supermarket at Mornington, early Monday 8 February. Detective Senior Sergeant Alan Paxton, of Somerville CIU, said the men with their faces covered loaded an unknown quantity of cigarettes into a shopping trolley and left through the Main Street entrance, 3.30am. Anyone with information is urged to call Crime Stoppers 1800 333 000.

Cash, camera found A “SUBSTANTIAL amount” of money was found in the pocket of an item of clothing donated to a Rosebud charity last week. Property officer Tony Paterson, of Rosebud police, said the money was waiting to be claimed by the rightful owner who would need to name the charity, the amount, and the denominations before being allowed to collect it. Meanwhile, police are seeking the owner of a Canon EOS 1000D camera found on Dromana foreshore on 30 January. If the owner can identify the camera either by its serial number or by the type or description of the photos police will be happy to return it. Database checks indicated that the camera had not been reported as either lost or stolen last week. Inquiries to Senior Constable Paterson at Rosebud police 5986 0444 (7am-3pm Monday to Friday).

MORNINGTON Peninsula Shire has ordered the owner of this Hastings property to clean it up. Rats scurrying inside and outside the house were filmed by a television current affairs crew. Pictures: Yanni

Clean-up order for rat-infested house Stephen Taylor steve@mpnews.com.au A HASTINGS house is so rat-infested that the rodents can be seen running along inside window ledges and climbing plants in the overgrown garden. Neighbours say the property is a health risk. Mornington Peninsula Shire has warned it will clean the property tomorrow (Wednesday 17 February) if it has not been done by the owner. Old clothing and newspaper are among the piles of rubbish outside the owner-occupied house. The house, surrounded by trees and bushes, backs onto a regularly mown

council reserve. Lee-Anne McGuinness, who has lived next door for four years, said she and other neighbours had “had enough” of the problem. “I’ve called the [Mornington Peninsula Shire council and the health department with no success and the CFA to say the property is a fire risk,” she said. “No one wants to do anything, but we have got to clean it up.” Ms McGuinness said her dogs and a neighbour’s cats “have got fleas from that property”. “My fear is that if the rats run out of food they will turn on him.” The shire last week confirmed that

acting on “residents’ complaints” it had issued a notice requiring the owner to remove the rats – and the rubbish. Follow up inspections over the next week would ensure the work was being done. Environment protection manager John Rankine said outreach services had also been in contact with the owner to offer support through the process. “Given the public health risk posed by the property we will arrange for the work to be done if it’s not completed within seven days,” Mr Rankine said. “Where owners are reluctant to take action, the shire has sufficient legal authority to ensure action is taken.”

NEWS DESK Explain non-vote MORNINGTON Peninsula residents who did not to vote in last year’s council elections will be sent “please explain” notices by the Victorian Electoral Commission. The VEC says it may send an infringement notice and a penalty of $83 to anyone who doesn’t respond to the letter, or doesn’t provide a sufficient reason for not voting. Around 350,000 letters will be sent out statewide. The letters are due back to the VEC within 28 days. “This notice is not a fine. It’s your chance to explain why you appear not to have voted, if this is the case. This is a question that must be asked of those who appear not to have voted,” electoral commissioner Warwick Gately said. “Please complete and send the notice back within the 28-day timeframe so that we can consider your explanation.”

Look after life jackets A FREE clinic to teach boaters how to maintain their life jackets is coming to Hastings. It is part of Transport Safety Victoria’s Float-Safe pilot program which began last month. MSV recreational boating safety manager Gareth Johnson said: “If you’ve fallen into the water unexpectedly and you get yourself in trouble, having a life jacket that doesn’t inflate isn’t much good to you. “If you own an inflatable lifejacket in Victoria, you should be performing regular checks to make sure it is going to work when you need it. “This program is about familiarising boaters with their life jackets so that they can conduct these checks effectively.” FloatSafe attendees will receive a $30 voucher from a retailer for a new lifejacket, service kit, or other safety equipment. The clinic runs at Hastings 4pm, 5pm, 6pm and 7pm on Friday 12 March. Book at wearalifejacket.transportsafety.vic. gov.au/floatsafe