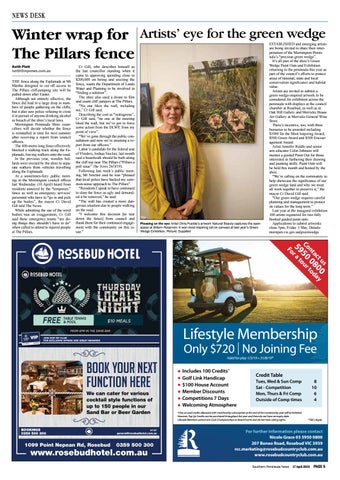 Winter wrap for Artists’ eye for the green wedge The Pillars fence Keith Platt keith@mpnews.com.au THE fence along the Esplanade at Mt Martha designed to cut off access to The Pillars cliff-jumping site will be pulled down after Easter. Although not entirely effective, the fence did lead to a large drop in numbers of people gathering on the cliffs, but it also saw police refusing to cross it in pursuit of anyone drinking alcohol in breach of the shire’s local laws. Mornington Peninsula Shire councillors will decide whether the fence is reinstalled in time for next summer after receiving a report from council officers. The 400-metre long fence effectively blocked a walking track along the Esplanade, forcing walkers onto the road. In the previous year, wooden bollards were erected by the shire to separate walkers from vehicles travelling along the Esplanade. At a sometimes-fiery public meeting in the Mornington council offices last Wednesday (10 April) heard from residents annoyed by the “temporary” fence as well as emergency services’ personnel who have to “go in and pick up the bodies”, the mayor Cr David Gill told The News. While admitting the use of the word bodies was an exaggeration, Cr Gill said these emergency teams “are doing things they shouldn’t have to do” when called to attend to injured people at The Pillars.

Cr Gill, who describes himself as the last councillor standing when it came to approving spending close to $200,000 on hiring and erecting the fence, wants the Department of Lands Water and Planning to be involved in “finding a solution”. The shire also used a drone to film and count cliff jumpers at The Pillars. “No one likes the wall, including me,” Cr Gill said. Describing the cost as “outrageous”, Cr Gill said, “no one at the meeting liked the wall, but we’ve got to force some action from the DLWP, from my point of view”. “We’ve gone through the public consultation and now we’re awaiting a report from our officers.” Labor’s candidate for the federal seat of Flinders, Joshua Sinclair, last month said a boardwalk should be built along the cliff top near The Pillars (“Pillars a poll issue” The News 26/3/19). Following last week’s public meeting, Mr Sinclair said he was “pleased that local police have backed my common-sense approach to The Pillars”. “Residents I speak to have continued to slam the fence as ugly and demanded it be removed,” he said. “The wall has created a more dangerous situation due to people walking on the road. “I welcome this decision [to tear down the fence] from council and thank them for their continued engagement with the community on this issue.”

ESTABLISHED and emerging artists are being invited to share their interpretation of the Mornington Peninsula’s “precious green wedge”. It’s all part of the shire’s Green Wedge Paint Outs and Exhibition returning to the peninsula this year as part of the council’s efforts to protect areas of national, state and local conservation significance and habitat value. Artists are invited to submit a green wedge-inspired artwork to be considered for exhibition across the peninsula with displays at the council chamber at Rosebud, as well as at Oak Hill Gallery and Merricks House Art Gallery at Merricks General Wine Store. There’s incentive, too, with three bursaries to be awarded including $1000 for the Most Inspiring Award; $500 Green Award and $500 Encouragement Award. Artist Jennifer Riddle and senior arts educator Colin Johnson will mentor a guided Paint Out for those interested in furthering their drawing and painting skills. Paint Outs will be held this month and hosted by the shire. “We’re calling on the community to help showcase the significance of our green wedge land and why we must all work together to preserve it,” the mayor Cr David Gill said. “Our green wedge requires careful planning and management to protect its values for the long term.” Last year at the inaugural exhibition 100 artists registered for two fully booked guided paint outs. Applications to submit artworks close 5pm, Friday 3 May. Details: mornpen.vic.gov.au/greenwedge

Lifestyle Membership Only $720 | No Joining Fee

^Any unused credits allocated with membership subscription at the end of the membership year will be forfeited. However, Top Up Credits can be purchased throughout the year and these do not have an expiry date. Lifestyle Members cannot win Club Championships or Board Events and do not have voting rights.