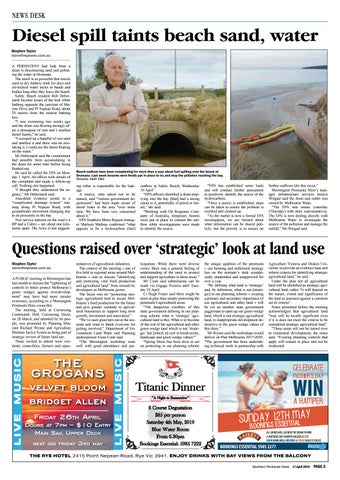 Diesel spill taints beach sand, water Stephen Taylor steve@mpnews.com.au A PERSISTENT fuel leak from a drain is discolouring sand and polluting the water at Dromana. The smell is so powerful that towels used to dry bathers stink for days and oil-slicked water sticks to hands and bodies long after they leave the beach. Safety Beach resident Rob Debernardi became aware of the leak while bathing opposite the junction of Marine Drive and Pt Nepean Road, about 20 metres from the nearest bathing box. “I was swimming two weeks ago and the drain was flowing strongly after a downpour of rain and I smelled diesel fumes,” he said. “I scooped up a handful of wet sand and smelled it and there was no mistaking it. I could see the sheen floating on the water.” Mr Debernardi said the contaminant had possibly been accumulating in the drain for some time before being flushed out. He said he called the EPA on Monday 1 April. An officer took details of the complaint and made a follow-up call. Nothing else happened. “I thought they understood the urgency,” Mr Debernardi said. Anecdotal evidence points to a “complicated drainage system” running along Pt Nepean Road, with groundwater movement changing due to its proximity to the bay. Two service stations on the road – a BP and a Caltex – are about one kilometre apart. The News is not suggest-

Beach walkers have been complaining for more than a year about fuel spilling onto the beach at Dromana. Last week bnooms were finally put in place to try and stop the pollution reaching the bay. Pictures: Keith Platt

ing either is responsible for the leakage. A source, who asked not to be named, said “various government departments” had been made aware of diesel leaks in the area “over some time. We have been very concerned about it.” EPA Southern Metro Region manager Marleen Mathias confirmed “what appears to be a hydrocarbon (fuel)

outflow at Safety Beach, Wednesday 10 April”. “EPA officers identified a drain emptying into the bay [that] had a strong odour to it, potentially of petrol or diesel,” she said. “Working with Oil Response Company of Australia, temporary booms were put in place to contain the outflow while investigations were made to identify the source.

“EPA has established some leads and will conduct further assessment to positively identify the source of the hydrocarbons. “Once a source is established, steps can be taken to ensure the problem is rectified and cleaned up. “As the matter is now a formal EPA investigation, we are limited about what information can be shared publicly, but the priority is to ensure no

further outflows like this occur.” Mornington Peninsula Shire’s manager infrastructure services Jessica Wingad said the drain and outlet was owned by Melbourne Water. “The EPA was onsite yesterday (Thursday) with shire representatives. The EPA is now dealing directly with Melbourne Water to investigate the source of the pollution and manage the outfall,” Ms Wingad said.

Questions raised over ‘strategic’ look at land use

A PUBLIC meeting in Mornington late last month to discuss the “tightening of controls to better protect Melbourne’s green wedges against overdevelopment” may have had more sinister overtones, according to a Mornington Peninsula Shire councillor. The meeting, held at Currawong Community Hall, Currawong Street, on 28 March, and attended by 66 people, was promoted by Planning Minister Richard Wynne and Agriculture Minister Jaclyn Symes as being part of strategic review of future land use. Those invited to attend were residents, councillors, farmers and repre-

sentatives of agricultural industries. The context of the meeting – one of five held in regional areas around Melbourne – was to discuss “identifying and protecting vital food production and agricultural land” from inroads by developers as Melbourne grows. The focus was on “protecting strategic agricultural land to secure Melbourne’s food production for the future and give greater certainty to agricultural businesses to support long term growth, investment and innovation”. “We’ve seen great turn out at the sessions and want to thank everyone for getting involved,” Department of Environment Land Water and Planning spokesperson Ewan Cook said. “The Mornington workshop went well with good attendance and par-

ticipation. While there were diverse views, there was a general feeling of understanding of the need to protect and support agriculture in these areas.” Mr Cook said submissions can be made via Engage Victoria until Tuesday 23 April. Cr Hugh Fraser said there might be more at play than simply protecting the peninsula’s agricultural areas. “The dangerous corollary of this state government defining in our planning scheme what is ‘strategic’ agricultural land is this: What is to become of the rest of the agricultural and other green wedge land which is not ‘strategic’ but [which is] rich in biodiversity, landscape and green wedge values?” “Spring Street has been slow to act on protecting in our planning scheme

the unique qualities of the peninsula – our housing and settlement strategy lies on the minister’s desk scandalously unattended and unapproved for over a year. “By defining what land is ‘strategic’ and, by definition, what is not [strategic] in our planning scheme – creating a primary and secondary importance of our agricultural and other land – will be yet an another state government juggernaut to open up our green wedge land, which is not strategic agricultural land, to inappropriate development destructive to the green wedge values of this shire.” Mr Wynne said the workshops would deliver on Plan Melbourne 2017-2050. “The government has been undertaking technical work in partnership with

Titanic Dinner “A Night to Remember”