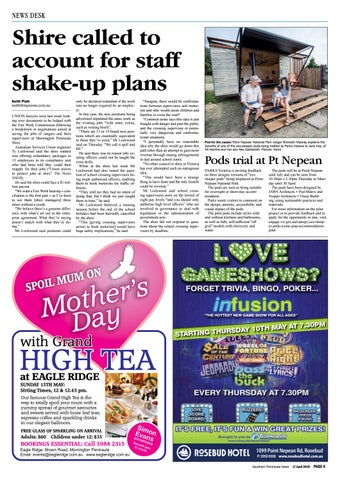 Shire called to account for staff shake-up plans Keith Platt keith@mpnews.com.au UNION lawyers were last week looking over documents to be lodged with the Fair Work Commission following a breakdown in negotiations aimed at saving the jobs of rangers and their supervisors at Mornington Peninsula Shire. Australian Services Union organiser Ty Lockwood said the shire wanted was offering redundancy packages to 13 employees in its compliance unit who had been told they could then reapply for their jobs (“Union moves to protect jobs at shire” The News 3/4/18). He said the shire could face a $1 million payout. “We want a Fair Work hearing – conciliation is the first part – as I’ve been to see them [shire managers] three times without a result. “We believe there’s a genuine difference with what’s set out in the enterprise agreement. What they’re saying doesn’t match with what they’re doing.” Mr Lockwood said positions could

only be declared redundant if the work was no longer required by an employer. In this case, the new positions being advertised stipulated the same work as the existing jobs “with some extras, such as writing briefs”. “There are 13 or 14 brand new positions which are essentially equivalent to those they’ve axed,” Mr Lockwood said on Thursday. “We call it spill and fill.” He said there was no reason why existing officers could not be taught the extra skills. While at the shire last week Mr Lockwood had also raised the question of school crossing supervisors being made authorised officers, enabling them to book motorists for traffic offences. “They told me they had no intent of doing that, but I think we just caught them in time,” he said. Mr Lockwood believed a training session before the end of the school holidays had been hurriedly cancelled by the shire. “This [giving crossing supervisors power to book motorists] would have huge safety implications,” he said.

“Imagine, there would be confrontations between supervisors and motorists and who would assist children and families to cross the road? “Common sense says this idea is just fraught with danger and puts the public and the crossing supervisor in potentially very dangerous and confrontational situations. “I personally have no reasonable idea why the shire would go down this path other than an attempt to gain more revenue through issuing infringements in and around school zones. “No other council or shire in Victoria has ever attempted such an outrageous idea. “This would have been a strange thing to have done and the only benefit could be revenue.” Mr Lockwood said school crossing supervisors were on the lowest of eight pay levels “and you should only authorise high level officers” who are involved in governance or deal with legislation or the administration of government acts. The shire did not respond to questions about the school crossing supervisors by deadline.

Pod for the cause: Point Nepean National Park ranger Brendan Mackay explains the benefits of one of the eco-sleeper pods being trialled by Parks Victoria to Jane Ivey, of Mt Martha and her son Alex Goldsmith. Picture: Yanni

Pods trial at Pt Nepean PARKS Victoria is inviting feedback on three designs versions of “eco sleeper pods” being displayed at Point Nepean National Park. The pods are seen as being suitable for overnight or short-stay accommodation. Parks wants visitors to comment on the design, amenity, accessibility and visual impact of the pods. The pilot pods include styles with and without kitchens and bathrooms, as well as fully self-sufficient “off grid” models with electricity and water.

The pods will be at Point Nepean until July and can be seen from 10.30am – 2.30pm Thursday to Monday until 30 April. The pods have been designed by JAWS Architects + Pod Matrix and Troppo Architects + Oscar Building, using sustainable practices and materials. For more information on the pilot project or to provide feedback and to apply for the opportunity to stay, visit: engage.vic.gov.au/canopy-eco-sleeper-pods-iconic-pop-accommodationpilot