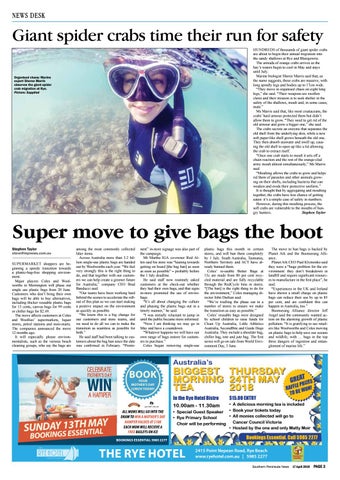 Giant spider crabs time their run for safety HUNDREDS of thousands of giant spider crabs are about to begin their annual migration into the sandy shallows at Rye and Blairgowrie. The armada of orange crabs arrives as the bay’s waters begin to cool in May and stays until July. Marine biologist Sheree Marris said that, as the name suggests, these crabs are massive, with long spindly legs and bodies up to 17cm wide. “They move in organised chaos on eight long legs,” she said. “Their weapons are swollen claws and their mission is to seek shelter in the safety of the shallows, moult and, in some cases, mate.” Ms Marris said that, like most crustaceans, the crabs’ hard armour protected them but didn’t allow them to grow. “They need to get rid of the old armour and grow a bigger one,” she said. The crabs secrete an enzyme that separates the old shell from the underlying skin, while a new soft paper-like shell grows beneath the old one. They then absorb seawater and swell up, causing the old shell to open up like a lid allowing the crab to extract itself. “Once one crab starts to moult it sets off a chain reaction and the rest of the orange-clad army moult almost simultaneously,” Ms Marris said. “Moulting allows the crabs to grow and helps rid them of parasites and other animals growing on their shells, including bacteria that can weaken and erode their protective uniform.” It is thought that by aggregating and moulting together, the crabs have less chance of getting eaten: it’s a simple case of safety in numbers. However, during this moulting process, the soft crabs are vulnerable to the mouths of hungry hunters. Stephen Taylor

Super move to give bags the boot Stephen Taylor steve@mpnews.com.au SUPERMARKET shoppers are beginning a speedy transition towards a plastic-bag-free shopping environment. Major players Coles and Woolworths in Mornington will phase out single use plastic bags from 20 June. Customers who don’t bring their own bags will be able to buy alternatives, including thicker reusable plastic bags for 15 cents, canvas bags for 99 cents or chiller bags for $2.49. The move affects customers at Coles and Woollies’ supermarkets, liquor stores, petrol stations and mini-marts. The companies announced the move 12 months ago. It will especially please environmentalists, such as the various beach cleaning groups, who say the bags are

among the most commonly collected litter items. Across Australia more than 3.2 billion single-use plastic bags are handed out by Woolworths each year. “We feel very strongly this is the right thing to do, and that together with our customers we can help create a greener future for Australia,” company CEO Brad Banducci said. “Our teams have been working hard behind the scenes to accelerate the rollout of this plan so we can start making a positive impact on the environment as quickly as possible. “We know this is a big change for our customers and store teams, and we need to do all we can to make the transition as seamless as possible for both.” He said staff had been talking to customers about the bag ban since the date was confirmed in February. “Promi-

nent” in-store signage was also part of the campaign. Mt Martha IGA co-owner Rod Allen said his store was “leaning towards getting on board [the bag ban] as soon as soon as possible” – probably before the 1 July deadline. He said staff now routinely asked customers at the check-out whether they had their own bags, and that signs in-store promoted the use of envirobags. “It’s all about changing the culture and phasing the plastic bags out in a timely manner,” he said. “I was initially reluctant to jump in until the public became more informed. “Now I am thinking we may go in May and have a countdown. “Whatever happens we will have our own range of bags instore for customers to purchase.” Coles began removing single-use

plastic bags this month in certain stores, and will ban them completely by 1 July. South Australia, Tasmania, Northern Territory and ACT have already banned them. Coles’ re-usable Better Bags at 15c are made from 80 per cent recycled material and are fully recyclable through the RedCycle bins in stores. “[The ban] is the right thing to do for the environment,” Coles managing director John Durkan said. “We’re trialling the phase out in a number of stores to ensure we make the transition as easy as possible.” Coles’ reusable bags were designed by school children to raise funds for Clean Up Australia, Little Athletics Australia, SecondBite and Guide Dogs Australia. They include a shoulder bag, chiller bag, tote and jute bag. The first series will go on sale from World Environment Day, 5 June.

The move to ban bags is backed by Planet Ark and the Boomerang Alliance. Planet Ark CEO Paul Klymenko said they were a “huge problem for the environment: they don’t breakdown in landfill and require significant resources to manufacture in the first place”, he said. “Experiences in the UK and Ireland have shown a small charge on plastic bags can reduce their use by up to 85 per cent, and are confident this can happen in Australia, too.” Boomerang Alliance director Jeff Angel said the community wanted action on the alarming growth of plastic pollution. “It is gratifying to see retailers like Woolworths and Coles moving on plastic bags to help save our oceans and wildlife, with … bags in the top three dangers of ingestion and entanglement of marine life.”