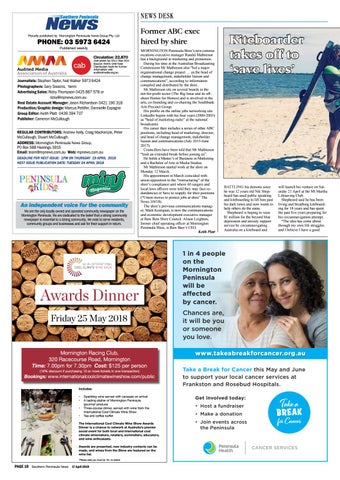 NEWS DESK Former ABC exec hired by shire MORNINGTON Peninsula Shire’s new communications executive manager Randal Mathieson has a background in marketing and promotion. During his time at the Australian Broadcasting Commission Mr Mathieson also “led a major organisational change project … as the head of change management, stakeholder liaison and communications”, according to information compiled and distributed by the shire. Mr Mathieson sits on several boards in the not-for-profit sector (The Big Issue and its offshoot Homes for Homes) and is involved in the arts, co-founding and co-chairing the Southbank Arts Precinct Group. His profile on the online jobs networking site LinkedIn begins with his four years (2000-2003) as “head of marketing-radio” at the national broadcaster. His career then includes a series of other ABC positions, including head of marketing; director; and head of change management, stakeholder liaison and communications (July 2015-June 2017). Councillors have been told that Mr Mathieson “took an extended break before joining us”. He holds a Master’s of Business in Marketing and a Bachelor of Arts in Media Studies. Mr Mathieson started work at the shire on Monday 12 March. His appointment in March coincided with union opposition to the “restructuring” of the shire’s compliance unit where 40 rangers and local laws officers were told they may face redundancies or have to reapply for their positions (“Union moves to protect jobs at shire” The News 3/4/18). The shire’s previous communications manager, Mark Kestigian, is now the communications and economic development executive manager at Baw Baw Shire Council. Alison Leighton, former chief operating officer at Mornington Peninsula Shire, is Baw Baw’s CEO. Keith Platt

The International Cool Climate Wine Show Awards Dinner is a chance to network at Australia’s premier social event for both local and international cool climate winemakers, retailers, sommeliers, educators, and wine enthusiasts. Awards are presented, new industry contacts can be made, and wines from the Show are featured on the wine list. *Please note you must be 18+ to attend

Kiteboarder takes off to ‘save lives’

BATTLING his demons since he was 12 years old Nik Shepheard has used public speaking and kiteboarding to lift him past his dark times and now wants to help others do the same. Shepheard is hoping to raise $1 million for the beyond blue depression and anxiety support service by circumnavigating Australia on a kiteboard and

will launch his venture on Saturday 21 April at the Mt Martha Lifesaving Club. Shepheard said he has been living and breathing kiteboarding for 18 years and has spent the past five years preparing for his circumnavigation attempt. “The idea has come about through my own life struggles and I believe I have a good

1 in 4 people on the Mornington Peninsula will be affected by cancer. Chances are, it will be you or someone you love. www.takeabreakforcancer.org.au Take a Break for Cancer this May and June to support your local cancer services at Frankston and Rosebud Hospitals. Get involved today: • Host a fundraiser • Make a donation • Join events across the Peninsula