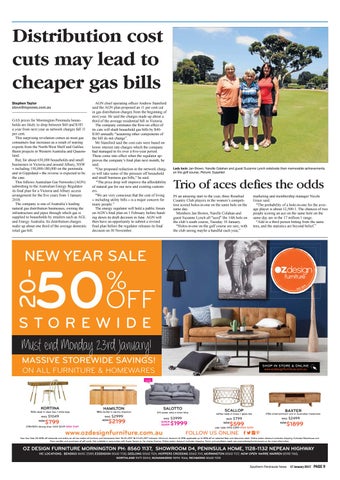 Distribution cost cuts may lead to cheaper gas bills Stephen Taylor steve@mpnews.com.au GAS prices for Mornington Peninsula households are likely to drop between $40 and $185 a year from next year as network charges fall 11 per cent. This surprising revelation comes as most gas consumers fear increases as a result of soaring exports from the North-West Shelf and Galilee Basin projects in Western Australia and Queensland. But, for about 650,000 households and small businesses in Victoria and around Albury, NSW – including 150,000-180,000 on the peninsula and in Gippsland – the reverse is expected to be the case. This follows Australian Gas Networks (AGN) submitting to the Australian Energy Regulator its final plan for a Victoria and Albury access arrangement for the five years from 1 January 2018. The company is one of Australia’s leading natural gas distribution businesses, owning the infrastructure and pipes through which gas is supplied to households by retailers such as AGL and Energy Australia. Its distribution charges make up about one third of the average domestic retail gas bill.

AGN chief operating officer Andrew Staniford said the AGN plan proposed an 11 per cent cut in gas distribution charges from the beginning of next year. He said the charges made up about a third of the average residential bill in Victoria. The company estimates the flow-on effect of its cuts will slash household gas bills by $40$185 annually “assuming other components of the bill do not change”. Mr Staniford said the cost cuts were based on lower interest rate charges which the company had managed to fix over a five-year period. These come into effect when the regulator approves the company’s final plan next month, he said. “Our proposed reduction in the network charges will take some of the pressure off household and small business gas bills,” he said. “The price drop will improve the affordability of natural gas for our new and existing customers. “We are very conscious that the cost of living – including utility bills – is a major concern for many people.” The energy regulator will hold a public forum on AGN’s final plan on 1 February before handing down its draft decision in June. AGN will then have an opportunity to submit a revised final plan before the regulator releases its final decision on 30 November.

Trio of aces defies the odds marketing and membership manager Nicole Grace said. “The probability of a hole-in-one for the average player is about 12,500:1. The chances of two people scoring an ace on the same hole on the same day are in the 17 million:1 range. “Add in a third person hitting from the same tees, and the statistics are beyond belief.”

IN an amazing start to the year, three Rosebud Country Club players in the women’s competition scored holes-in-one on the same hole on the same day. Members Jan Brown, Narelle Colahan and guest Suzanne Lynch all “aced” the 14th hole on the club’s south course, Tuesday 10 January. “Holes-in-one on the golf course are rare, with the club seeing maybe a handful each year,”

www.ozdesignfurniture.com.au New Year Sale 20-50% off storewide and online on all new orders of furniture and homewares from 10-01-2017 till 23-01-2017 inclusive. Minimum discount of 20% applicable up to 50% off on selected ﬂoor and clearance stock. Online orders discount excludes shipping. Excludes Glasshouse and Circa candles and purchases of gift cards. Not available in conjunction with Super Savers or Zip money ﬁnance. Online orders discount excludes shipping. Terms and conditions apply see www.ozdesignfurniture.com.au for more information.