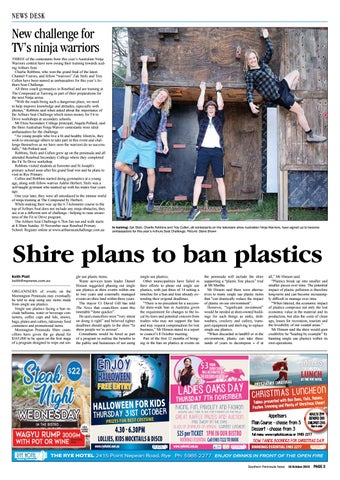 New challenge for TV’s ninja warriors THREE of the contestants from this year’s Australian Ninja Warriors contest have now swung their training towards scaling Arthurs Seat. Charlie Robbins, who won the grand final of the latest Channel 9 series, and fellow “warriors” Zak Stolz and Troy Cullen have been named as ambassadors for this year’s Arthurs Seat Challenge. All three coach gymnastics in Rosebud and are training at The Compound at Tuerong as part of their preparations for the next Ninja series. “With the roads being such a dangerous place, we need to help improve knowledge and attitudes, especially with phones,” Robbins said when asked about the importance of the Arthurs Seat Challenge which raises money for Fit to Drive workshops at secondary schools. Mt Eliza Secondary College principal, Angela Pollard, said the three Australian Ninja Warrior contestants were ideal ambassadors for the challenge. “As young people who live a fit and healthy lifestyle, they wish to encourage others to take part in this event and challenge themselves as we have seen the warriors do so successfully,” Ms Pollard said. Robbins, Stolz and Cullen grew up on the peninsula and all attended Rosebud Secondary College where they completed the Fit To Drive workshop. Robbins visited students at Sorrento and St Joseph's primary school soon after his grand final win and he plans to visit to Rye Primary. Cullen and Robbins started doing gymnastics at a young age, along with fellow warrior Ashlin Herbert. Stolz was a self-taught gymnast who teamed up with his mates four years ago. One year later, they were all introduced to the intense world of ninja training at The Compound by Herbert. While making their way up the 6.7-kilometre course to the top of Arthurs Seat does not include any ninja obstacles, they see it as a different sort of challenge - helping to raise awareness of the Fit to Drive program. The Arthurs Seat Challenge 6.7km fun run and walk starts at 8.30am Sunday 10 November near Rosebud Primary School. Register online at www.arthursseatchallenge.com.au

In training: Zak Stolz, Charlie Robbins and Troy Cullen, all contestants on the television show Australian Ninja Warriors, have signed up to become ambassadors for this year’s Arthurs Seat Challenge. Picture: Steve Brown

Shire plans to ban plastics Keith Platt keith@mpnews.com.au ORGANISERS of events on the Mornington Peninsula may eventually be told to stop using any items made from single use plastics. Single use plastics facing a ban include balloons, water or beverage containers, coffee cups and lids, straws, bags, plates and cutlery, takeaway food containers and promotional items. Mornington Peninsula Shire councillors have given the go ahead for $165,000 to be spent on the first stage of a program designed to wipe out sin-

gle use plastic items. Waste services team leader Daniel Hinson suggested phasing out single use plastics at shire events within one to two years and externally managed events on shire land within three years. The mayor Cr David Gill has told The News that councillors want this timetable “done quicker”. He said councillors were “very intent on doing it right” and believed tighter deadlines should apply to the shire “to show people we’re serious”. Consultants would be hired as part of a program to outline the benefits to the public and businesses of not using

single use plastics. Other municipalities have failed in their efforts to phase out single use plastics, with just three of 14 setting a timeline for a ban and four already extending their original deadlines. “There is no precedent for a successful shire-wide ban in Australia given the requirement for changes to the local by-laws and potential concern from traders who may not support the ban and may request compensation for lost business,” Mr Hinson stated in a report to council’s 8 October meeting. Part of the first 12 months of bringing in the ban on plastics at events on

the peninsula will include the shire supporting a “plastic free places” trial at Mt Martha. Mr Hinson said there were alternatives to many single use plastic items that “can drastically reduce the impact of plastic on our environment”. However, “significant investment” would be needed at shire-owned buildings for such things as sinks, dishwashers, crockery and cutlery, transport equipment and shelving to replace single use plastics. “When discarded in landfill or in the environment, plastic can take thousands of years to decompose – if at

all,” Mr Hinson said. “Plastics break up into smaller and smaller pieces over time. The potential impact of plastic pollution is therefore long-term and can become increasingly difficult to manage over time. “When littered, the economic impact of plastics comprises not only the lost economic value in the material and its production, but also the costs of clean ups, losses for recreation, tourism and the liveability of our coastal areas.” Mr Hinson said the shire would gain credibility be “leading by example” by banning single use plastics within its own operations.