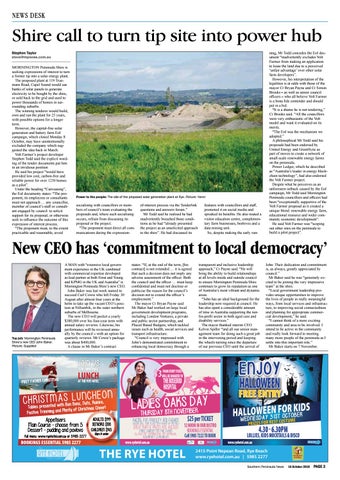 Shire call to turn tip site into power hub ning, Mr Todd concedes the EoI document “inadvertently excludes Volt Farmer from making an application to lease the land due to a perceived ‘unfair advantage’ over other solar farm developers”. However, his interpretation of the legalities is at odds with those of the mayor Cr Bryan Payne and Cr Simon Brooks – as well as senior council officers – who all believe Volt Farmer is a bona fide contender and should put in a bid. “It is a shame he is not tendering,” Cr Brooks said. “All the councillors were very enthusiastic of the Volt model and want it evaluated on its merits. “The EoI was the mechanism we adopted.” A philosophical Mr Todd said his proposals had been endorsed by United Energy and GreenSync as part of moves to create a network of small-scale renewable energy farms on the peninsula. Power Ledger, which he described as “Australia’s leader in energy blockchain technology”, had also endorsed the Volt Farmer project. Despite what he perceives as an unforeseen setback caused by the EoI campaign, Mr Todd said Mornington Peninsula councillors and officers had been “exceptionally supportive of the Volt Farmer proposal as it created a unique blend: renewable energy farm, educational resource and wider community economic development”. He said Volt Farmer was “scoping out other sites on the peninsula to build a pilot project”.

Stephen Taylor steve@mpnews.com.au MORNINGTON Peninsula Shire is seeking expressions of interest to turn a former tip into a solar energy plant. The proposed plant at 119 Truemans Road, Capel Sound would use banks of solar panels to generate electricity to be bought by the shire, or sold back to the grid and used to power thousands of homes in surrounding suburbs. The winning tenderer would build, own and run the plant for 25 years, with possible options for a longer term. However, the capital-free solar generation and battery farm EoI campaign, which closed Monday 8 October, may have unintentionally excluded the company which suggested the idea back in March. Volt Farmer’s project developer Stephen Todd said the explicit wording of the tender documents put him in an invidious position He said his project “would have provided low cost, carbon-free and reliable power for over 1250 homes as a pilot”. Under the heading “Canvassing”, the EoI documenty states: “The proponent, its employees or consultants must not approach … any councillor, member of council’s staff or consultant engaged by council: to solicit support for its proposal; or otherwise seek to influence the outcome of this expression of interest process. “The proponent must, to the extent practicable and reasonable, avoid

Power to the people: The site of the proposed solar generation plant at Rye. Picture: Yanni

socialising with councillors or members of council’s team evaluating the proposals and, where such socialising occurs, refrain from discussing its proposal or the project. “The proponent must direct all communications during the expression-

of-interest process via the Tenderlink questions and answers forum.” Mr Todd said he realised he had inadvertently breached those conditions as he had “already presented the project as an unsolicited approach to the shire”. He had discussed its

features with councillors and staff, promoted it on social media and spruiked its benefits. He also touted a visitor education centre, complementary farm businesses, beehives and a data mining unit. So, despite making the early run-

A MAN with “extensive local government experience in the UK combined with commercial expertise developed as lead partner at both Ernst and Young and KPMG in the UK and Australia” is Mornington Peninsula Shire’s new CEO. John Baker was last week named to succeed Carl Cowie who left Friday 30 August after almost four years at the helm to take up the vacant CEO’s position at Nillumbik, in the outer northern suburbs of Melbourne. The new CEO will pocket a yearly $380,000 over his four-year term with annual salary reviews. Likewise, his performance will be reviewed annually by the council – with an option for quarterly reviews. Mr Cowie’s package was about $400,000. A clause in Mr Baker’s contract

states: “If, at the end of the term, [his contract] is not extended … it is agreed that such a decision does not imply any adverse assessment of the officer. Both the council and the officer … must keep confidential and must not disclose or publicise the reason for the council’s decision not to extend the officer’s employment.” The mayor Cr Bryan Payne said Mr Baker had worked on large local government development programs, including London Ventures, a private and public sector partnership, and Placed Based Budgets, which tackled issues such as health, social services and transport infrastructure. “Council is very impressed with John’s demonstrated commitment to enhancing local democracy through a

transparent and inclusive leadership approach,” Cr Payne said. “He will bring the ability to build relationships at all levels inside and outside council to ensure Mornington Peninsula Shire continues to grow its reputation as one of Australia’s most vibrant and dynamic areas. “John has an ideal background for the leadership now required at council. He has also spent a considerable amount of time in Australia supporting the notfor-profit sector in both aged care and disability services.” The mayor thanked interim CEO Kelvin Spiller “and all our senior management team for doing such a great job in the intervening period and keeping the wheels turning since the departure of our previous CEO until the arrival of

John. Their dedication and commitment is, as always, greatly appreciated by council.” Mr Baker said he was “genuinely excited to be joining the very impressive team” at the shire. “Local government leadership provides unique opportunities to improve the lives of people in really meaningful ways, from local services and infrastructure, to improving social connectedness and planning for appropriate commercial development,” he said. “I cannot think of a more exciting community and area to be involved. I intend to be active in the community and really look forward to meeting many more people of the peninsula as I settle into this important role.” Mr Baker starts on 7 November.