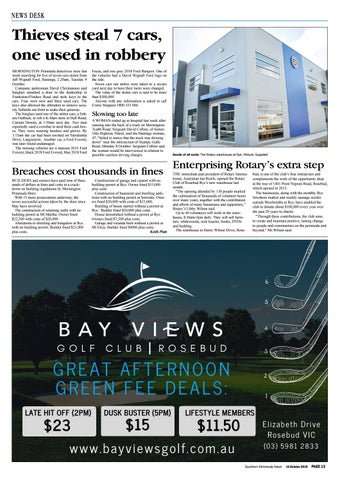 Thieves steal 7 cars, one used in robbery MORNINGTON Peninsula detectives were last week searching for five of seven cars stolen from Jeff Wignall Ford, Hastings, 2.20am, Tuesday 9 October. Company spokesman David Christianson said burglars smashed a door to the dealership in Frankston-Flinders Road and stole keys to the cars. Four were new and three used cars. The keys also allowed the offenders to remove security bollards out front to make their getaway. The burglars used one of the stolen cars, a Subaru Outback, to rob a K-Mart store in Hall Road, Carrum Downs, at 1.50am next day. Two men reportedly used a crowbar to steal three cash boxes. They were wearing hoodies and gloves. By 3.15am the car had been torched on Yarralumla Drive, Langwarrin. Another car, a Ford Everest, was later found undamaged. The missing vehicles are a maroon 2015 Ford Everest, black 2018 Ford Everest, blue 2018 Ford

Focus, and two grey 2018 Ford Rangers. One of the vehicles had a David Wignall Ford logo on the side. Seven cars not stolen were taken to a secure yard next day to have their locks were changed. The value of the stolen cars is said to be more than $300,000. Anyone with any information is asked to call Crime Stoppers 1800 333 000.

Slowing too late A WOMAN ended up in hospital last week after running into the back of a truck on MorningtonTyabb Road. Sergeant David Collins, of Somerville Highway Patrol, said the Hastings woman, 47, “failed to notice that the truck was slowing down” near the intersection of Stumpy Gully Road, Monday 8 October. Sergeant Collins said the woman would be interviewed in relation to possible careless driving charges.

Breaches cost thousands in fines BUILDERS and owners have paid tens of thousands of dollars in fines and costs in a crackdown on building regulations by Mornington Peninsula Shire. With 15 more prosecutions underway, the seven successful actions taken by the shire since May have involved: The construction of retaining walls with no building permit at Mt Martha: Owner fined $22,500 with costs of $20,000. Alterations to dwelling and bungalow at Rye with no building permit: Builder fined $25,000 plus costs.

Goods of all sorts: The Rotary warehouse at Rye. Picture: Supplied

Enterprising Rotary’s extra step THE immediate past president of Rotary International, Australian Ian Risele, opened the Rotary Club of Rosebud Rye’s new warehouse last month. “The opening attended by 130 people marked the culmination of thousands of volunteer hours over many years, together with the contribution and efforts of many businesses and supporters,” Rotary’s Libby Wilson said. Up to 40 volunteers will work in the warehouse, 8.30am-5pm daily. They will sell furniture, whitewoods, nick knacks, books, DVDs and bedding. The warehouse in Henry Wilson Drive, Rose-

bud, is one of the club’s four enterprises and complements the work of the opportunity shop at the rear of 1401 Point Nepean Road, Rosebud, which opened in 2013. The businesses, along with the monthly Rye foreshore market and weekly sausage sizzles outside Woolworths at Rye, have enabled the club to donate about $100,000 every year over the past 20 years to charity. “Through these contributions, the club aims to create and maintain positive, lasting change to people and communities on the peninsula and beyond,” Ms Wilson said.