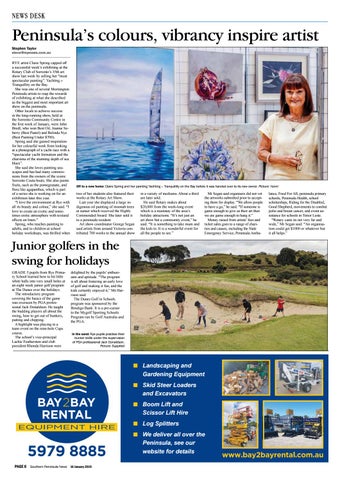 Peninsula’s colours, vibrancy inspire artist Stephen Taylor steve@mpnews.com.au RYE artist Claire Spring capped off a successful week’s exhibiting at the Rotary Club of Sorrento’s 35th art show last week by selling her “most spectacular painting”: Yachting – Tranquillity on the Bay. She was one of several Mornington Peninsula artists to reap the rewards of exhibiting at what she described as the biggest and most important art show on the peninsula. Other locals to achieve success in the long-running show, held at the Sorrento Community Centre in the first week of January, were John Bredl, who won Best Oil, Joanne Seberry (Best Pastel) and Belinda Nye (Best Painting Under $700). Spring said she gained inspiration for her colourful work from looking at a photograph of a yacht race with a “spectacular yacht formation and the charisma of the stunning depth of sea blues”. She said she loves painting seascapes and has had many commissions from the owners of the iconic Sorrento Couta boats. She also paints fruits, such as the pomegranate, and flora like agapanthus, which is part of a series she is working on for an exhibition later this year. “I love the environment at Rye with all its beauty and colour,” she said. “I love to create an exotic and sometimes erotic atmosphere with textural effects on linen.” Spring, who teaches painting to adults, and to children at school holiday workshops, was thrilled when

Off to a new home: Claire Spring and her painting Yachting – Tranquillity on the Bay before it was handed over to its new owner. Picture: Yanni

two of her students also featured their works at the Rotary Art Show. Last year she displayed a large indigenous oil painting of moonah trees at sunset which received the Highly Commended Award. She later sold it to a peninsula resident. Art show coordinator George Segan said artists from around Victoria contributed 700 works to the annual show

in a variety of mediums. About a third are later sold. He said Rotary makes about $20,000 from the week-long event which is a mainstay of the area’s holiday attractions. “It’s not just an art show but a community event,” he said. “It is something to take mum and the kids to. It is a wonderful event for all the people to see.”

Mr Segan said organisers did not vet the artworks submitted prior to accepting them for display. “We allow people to have a go,” he said. “If someone is game enough to give us their art then we are game enough to hang it.” Money raised from artists’ fees and ticket sales goes to a range of charities and causes, including the State Emergency Service, Peninsula Ambu-

Junior golfers in the swing for holidays GRADE 5 pupils from Rye Primary School learned how to hit little white balls into very small holes at an eight week junior golf program at The Dunes over the holidays. The introductory program covering the basics of the game was overseen by PGA professional Jack Donaldson. He taught the budding players all about the swing, how to get out of bunkers, putting and chipping. A highlight was playing in a team event on the nine-hole Cups course. The school’s vice-principal Lachie Featherston and club president Rhonda Harrison were

delighted by the pupils’ enthusiasm and aptitude. “The program is all about fostering an early love of golf and making it fun, and the kids certainly enjoyed it,” Ms Harrison said. The Dunes Golf in Schools program was sponsored by the Bendigo Bank. It is a pre-cursor to the Mygolf Sporting Schools Program run by Golf Australia and the PGA. In the sand: Rye pupils practise their bunker skills under the supervision of PGA professional Jack Donaldson. Picture: Supplied

Landscaping and Gardening Equipment Skid Steer Loaders and Excavators Boom Lift and Scissor Lift Hire Log Splitters We deliver all over the Peninsula, see our website for details

lance, Food For All, peninsula primary schools, Peninsula Health, school scholarships, Riding for the Disabled, Good Shepherd, movements to combat polio and breast cancer, and event assistance for schools in Timor Leste. “Rotary casts its net very far and wide,” Mr Segan said. “An organisation could get $1000 or whatever but it all helps.”