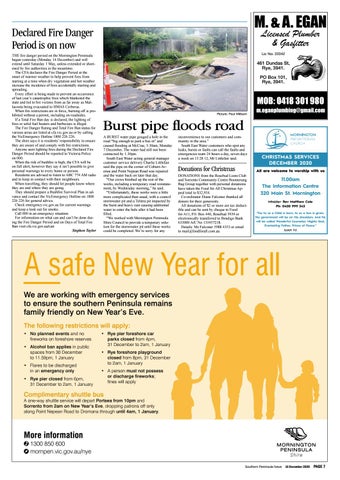 Declared Fire Danger Period is on now THE fire danger period on the Mornington Peninsula began yesterday (Monday 14 December) and will extend until Saturday 1 May, unless extended or shortened by fire authorities in the meantime. The CFA declares the Fire Danger Period at the onset of warmer weather to help prevent fires from starting at a time when dry vegetation and hot weather increase the incidence of fires accidentally starting and spreading. Every effort is being made to prevent an occurrence of last year’s catastrophic fires which blanketed the state and led to fire victims from as far away as Mallacoota being evacuated to HMAS Cerberus. When fire restrictions are in force, burning off is prohibited without a permit, including on roadsides. If a Total Fire Ban day is declared, the lighting of fires or solid fuel heaters and barbecues is illegal. The Fire Danger Rating and Total Fire Ban status for various areas are listed at cfa.vic.gov.au or by calling the VicEmergency Hotline 1800 226 226. The shire says it is residents’ responsibility to ensure they are aware of and comply with fire restrictions. Anyone seen lighting fires during the Declared Fire Danger Period should be reported to Victoria Police on 000. When the risk of bushfire is high, the CFA will be on full alert, however they say it isn’t possible to give personal warnings to every home or person. Residents are advised to listen to ABC 774 AM radio and to keep in contact with their neighbours. When travelling, they should let people know where they are and where they are going. They should prepare a Bushfire Survival Plan in advance and contact the VicEmergency Hotline on 1800 226 226 for general advice. Check emergency.vic.gov.au for current warnings and keep a look out for smoke. Call 000 in an emergency situation. For information on what can and can’t be done during the Fire Danger Period and on Days of Total Fire Ban visit cfa.vic.gov.au/can Stephen Taylor

Burst pipe floods road A BURST water pipe gouged a hole in the road “big enough to park a bus in” and caused flooding at McCrae, 5.30am, Monday 7 December. The water had still not been connected by 1.30pm. South East Water acting general manager customer service delivery Charlie Littlefair said the pipe on the corner of Coburn Avenue and Point Nepean Road was repaired and the water back on later that day. “Our crews finished up the rest of the works, including a temporary road reinstatement, by Wednesday morning,” he said. “Unfortunately, these works were a little more complicated than usual, with a council stormwater pit and a Telstra pit impacted by the burst and heavy rain causing additional water to enter the hole after it had been filled. “We worked with Mornington Peninsula Shire Council to provide a temporary solution for the stormwater pit until these works could be completed. We’re sorry for any

inconvenience to our customers and community in the area.” South East Water customers who spot any leaks, bursts or faults can call the faults and emergencies team 24 hours a day, seven days a week on 13 28 12, Mr Littlefair said.

DONATIONS from the Rosebud Lions Club and Sorrento Community Centre Boomerang Bag Group together with personal donations have taken the Food for All Christmas Appeal total to $32,954. Co-ordinator Diane Falconer thanked all donors for their generosity. All donations of $2 or more are tax deductible and can be sent by cheque to Food for A11, P.0. Box 440, Rosebud 3939 or electronically transferred to Bendigo Bank 633000 A/C No 133457218. Details: Ms Falconer 5988 4353 or email to mail@foodforall.com.au

CHRISTMAS SERVICES DECEMBER 2020 All are welcome to worship with us

11.00am The Information Centre 320 Main St. Mornington Minister: Rev Matthew Cole Ph: 0400 999 343 “For to us a Child is born, to us a Son is given, the government will be on His shoulders. And He will be called Wonderful Counselor, Mighty God, Everlasting Father, Prince of Peace.” Isaiah 9:6

A safe New Year for all We are working with emergency services to ensure the southern Peninsula remains family friendly on New Year’s Eve. The following restrictions will apply: • No planned events and no fireworks on foreshore reserves • Alcohol ban applies in public spaces from 30 December to 11.59pm, 1 January • Flares to be discharged in an emergency only • Rye pier closed from 6pm, 31 December to 2am, 1 January

A one-way shuttle service will depart Portsea from 10pm and Sorrento from 2am on New Year’s Eve, dropping patrons off only along Point Nepean Road to Dromana through until 4am, 1 January.