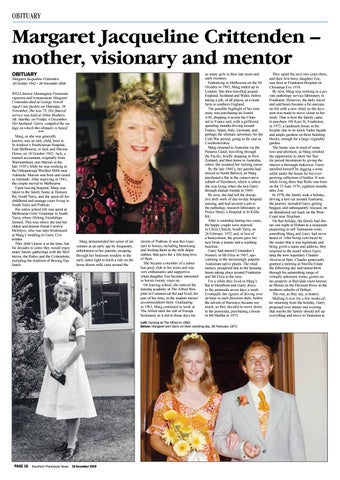 Margaret Jacqueline Crittenden 18 October 1942 – 26 November 2020 WELL known Mornington Peninsula vigneron and restaurateur Margaret Crittenden died at George Vowell Aged Care facility on Thursday, 26 November. She was 78. Her funeral service was held at Tobin Brothers, Mt. Martha, on Friday, 4 December. Her husband, Garry, compiled the eulogy on which this obituary is based. *** Marg, as she was generally known, was an only child, born at St Andrew’s Presbyterian Hospital, East Melbourne, to Jack and Marion Down, on 18 October 1942. Jack, a trained accountant, originally from Warrnambool, met Marion in the late 1930’s while he was working at the Onkaparinga Woollen Mills near Adelaide. Marion was born and raised in Adelaide. After marrying in 1941, the couple moved to Melbourne. Upon leaving hospital, Marg was taken to the family home at Domain Rd, South Yarra, and she spent all her childhood and teenage years living in South Yarra and Prahran. Her entire school life was spent at Melbourne Girls’ Grammar in South Yarra, where lifelong friendships formed. This was where she met her oldest and dearest friend Carolyn McIntyre, who was later bridesmaid at Marg’s wedding to Garry Crittenden. They didn’t know it at the time, but for decades to come they would enjoy many family gatherings with the McIntyres, the Rabys and the Crittendens; including the tradition of Boxing Day lunch.

Marg demonstrated her sense of adventure at an early age by frequently, unbeknown to her parents, escaping through her bedroom window in the early dawn light to hitch a ride on the horse drawn milk carts around the

streets of Prahran. It was this exposure to horses, including harnessing and feeding them at the milk depot stables, that gave her a life-long love of them. She became a member of a suburban pony club in her teens and was very enthusiastic and supportive when daughter Zoe became interested in horses twenty years on. On leaving school, she entered the nursing academy at The Alfred Hospital in Commercial Rd and lived, for part of her time, in the student nurses’ accommodation there. Graduating in 1963, Marg continued to work at The Alfred until the call of Europe beckoned, as it did in those days for

so many girls in their late teens and early twenties. Embarking in Melbourne on the SS Orcades in 1965, Marg ended up in London. She then travelled around England, Scotland and Wales, before taking a job, of all places, at a mink farm in southern England. The possible highlight of her time away was purchasing an Austin A30, shipping it across the Channel to France and, with a girlfriend, spending months driving around France, Spain, Italy, Germany and, perhaps the ultimate adventure for the Cold War period, going as far east as Czechoslovakia. Marg returned to Australia via the Panama Canal, travelling through the Pacific, briefly stopping in New Zealand, and then home to Australia, where she resumed her nursing career. By the late 1960’s, her parents had moved to North Balwyn, so Marg purchased a flat in the conservative suburb of Hawthorn, which is where she was living when she met Garry through mutual friends in 1969. By now, she had left the disruptive shift work of day-to-day hospital nursing, and had secured a job in the pathology research laboratory at Prince Henry’s Hospital in St Kilda Rd. After a courtship lasting two years, the happy couple were married in Christ Church, South Yarra, on 26 February 1972 and, in lieu of a honeymoon, the groom gave his new bride a toaster and a washing machine. Garry had started Crittenden’s Nursery in Mt Eliza in 1967, specialising in the increasingly popular Australian native plants. The retail nursery prospered due to the housing boom taking place around Frankston and Mt Eliza at the time. For a while they lived in Marg’s flat in Hawthorn and Garry drove to the peninsula seven days a week. Eventually the rigours of driving over an hour in each direction daily, before the advent of freeways, became too much, so they decided to move down to the peninsula, purchasing a house in Mt Martha in 1973.

Left: Nursing at The Alfred in 1962 Below: Margaret and Garry on their wedding day, 26 February 1972

They spent the next two years there, and their first born, daughter Zoe, was born at Frankston Hospital on Christmas Eve 1974. By now, Marg was working in a private pathology service laboratory in Frankston. However, the daily travel and odd hours became a bit onerous on life with a new child, so the decision was made to move closer to her work. That is how the family came to purchase 106 Kars St, Frankston, in 1975; a landmark house in the locality due to its mock Tudor façade and ample gardens on three building blocks; enough for a large vegetable garden. The house was in need of some love and attention, so Marg relished the opportunity to show her flair for period decoration by giving the interior a thorough makeover. Garry satisfied himself by digging a wine cellar under the house for his evergrowing collection of bottles. It was while living there that Rollo was born on the 13 June 1976, eighteen months after Zoe. In 1978, the family took a holiday, driving a hire car around Tasmania; the journey included Garry getting bogged, and subsequently rescued, on an abandoned rail track on the West Coast near Strachan. On that holiday, the family had dinner one night in Hobart at a restaurant purporting to sell Tasmanian wine; something Marg and Garry had never heard of. After being convinced by the waiter that it was legitimate and being given a name and address, they returned to the motel where Garry rang the now legendary Claudio Alcorso at 9pm. Claudio generously granted a meeting at Morilla Estate the following day and tasted them through his astonishing range of virtually unknown wines, grown on his property at Berridale (now known as Mona) on the Derwent River in the northern suburbs of Hobart. The rest, as they say, is history. Mulling it over for a few weeks after returning from the holiday, Garry proposed over dinner one evening that maybe the family should sell up everything and move to Tasmania to