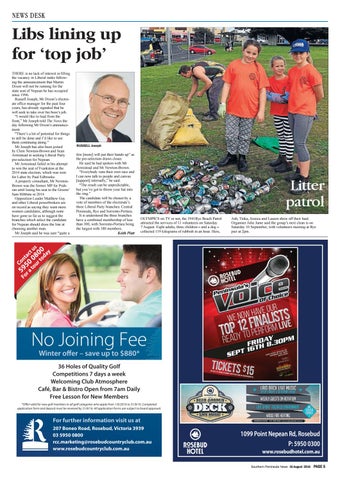 Libs lining up for ‘top job’ THERE is no lack of interest in filling the vacancy in Liberal ranks following the announcement that Martin Dixon will not be running for the state seat of Nepean he has occupied since 1996. Russell Joseph, Mr Dixon’s electorate office manager for the past four years, has already signaled that he will seek to take over his boss’s job. “I would like to lead from the front,” Mr Joseph told The News the day following Mr Dixon’s announcement. “There’s a lot of potential for things to still be done and I’d like to see them continuing along.” Mr Joseph has also been joined by Clem Newton-Brown and Sean Armistead in seeking Liberal Party pre-selection for Nepean. Mr Armistead failed in his attempt to win the seat of Frankston at the 2014 state election, which was won for Labor by Paul Edbrooke. A property consultant, Mr NewtonBrown was the former MP for Prahran until losing his seat to the Greens’ Sam Hibbins in 2014. Opposition Leader Matthew Guy and other Liberal powerbrokers are on record as saying they want more women candidates, although none have gone so far as to suggest the branches which select the candidate for Nepean should draw the line at choosing another man. Mr Joseph said he was sure “quite a

few [more] will put their hands up” as the pre-selection draws closer. He said he had spoken with Mr Armistead and Mr Newton-Brown. “Everybody runs their own race and I can now talk to people and canvas [support] internally,” he said. “The result can be unpredictable, but you’ve got to throw your hat into the ring.” The candidate will be chosen by a vote of members of the electorate’s three Liberal Party branches: Central Peninsula, Rye and Sorrento-Portsea. It is understood the three branches have a combined membership of less than 300, with Sorrento-Portsea being the largest with 180 members. Keith Platt

Litter patrol OLYMPICS on TV or not, the 3941Rye Beach Patrol attracted the services of 11 volunteers on Saturday 7 August. Eight adults, three children – and a dog – collected 119 kilograms of rubbish in an hour. Here,

Ash, Tinka, Jessica and Lauren show off their haul. Organiser Julie Jame said the group’s next clean is on Saturday 10 September, with volunteers meeting at Rye pier at 2pm.