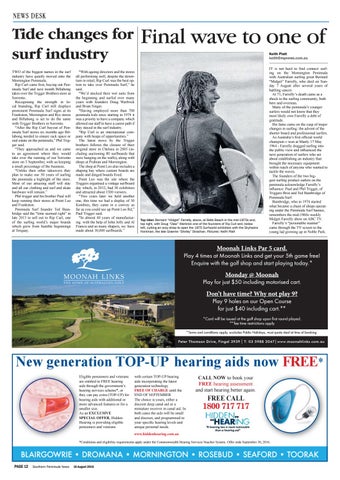 Final wave to one of

Tide changes for surf industry TWO of the biggest names in the surf industry have quietly moved onto the Mornington Peninsula. Rip Curl came first, buying out Peninsula Surf and next month Billabong takes over the Trigger Brothers store at Sorrento. Recognising the strength in local branding, Rip Curl still displays prominent Peninsula Surf signs at its Frankston, Mornington and Rye stores and Billabong is set to do the same with Trigger Brothers in Sorrento. â&#x20AC;&#x153;After the Rip Curl buyout of Peninsula Surf stores six months ago Billabong needed to ensure rack space or real estate on the peninsula,â&#x20AC;? Phil Trigger said. â&#x20AC;&#x153;They approached us and we came to an agreement where they would take over the running of our Sorrento store on 5 September, with us keeping a small percentage of the business. â&#x20AC;&#x153;Unlike their other takeovers they plan to make our 50 years of surfing the peninsula a highlight of the store. Most of our amazing staff will stay and all our clothing and surf and skate hardware will remain.â&#x20AC;? Phil trigger and his brother Paul will keep running their stores at Point Leo and Frankston. Peninsula Surf founder Ted Bainbridge said the â&#x20AC;&#x153;time seemed rightâ&#x20AC;? in late 2015 to sell out to Rip Curl, one of the surfing worldâ&#x20AC;&#x2122;s major brands which grew from humble beginnings at Torquay.

â&#x20AC;&#x153;With ageing directors and the stores all performing well, despite the downturn in retail, Rip Curl was the best option to take over Peninsula Surf,â&#x20AC;? he said. â&#x20AC;&#x153;Weâ&#x20AC;&#x2122;d stocked their wet suits from the beginning and surfed over many years with founders Doug Warbrick and Brian Singer. â&#x20AC;&#x153;Having employed more than 700 peninsula kids since starting in 1974 it was a priority to have a company which allowed our staff to have a career path if they stayed in the surf industry. â&#x20AC;&#x153;Rip Curl is an international company with heaps of opportunities.â&#x20AC;? The latest move by the Trigger brothers follows the closure of their original store in Chelsea in 2005 (including auctioning 80 surfboards that were hanging on the walls), along with shops at Prahran and Mornington. The shop at Point Leo also includes a shaping bay where custom boards are made and dinged boards fixed. Point Leo was the site where the Triggers organised a vintage surfboard day which, in 2012, had 30 exhibitors and attracted about 1500 viewers. â&#x20AC;&#x153;Two years later we held another one, this time we had a display of 30 Kombies, they came in a convoy as far as you could see up Point Leo Rd,â&#x20AC;? Paul Trigger said. â&#x20AC;&#x153;In almost 40 years of manufacturing with the help of John Jolly and Al Francis and so many shapers, we have made about 30,000 surfboards.â&#x20AC;?

IT is not hard to find connect surfing on the Mornington Peninsula with Australian surfing great Bernard â&#x20AC;&#x153;Midgetâ&#x20AC;? Farrelly, who died on Sunday 7 August after several years of battling cancer. At 71, Farrellyâ&#x20AC;&#x2122;s death came as a shock to the surfing community, both here and overseas. Many of the peninsulaâ&#x20AC;&#x2122;s younger surfers would not know that they most likely owe Farrelly a debt of gratitude. His fame came on the cusp of major changes in surfing: the advent of the shorter board and professional surfers. As Australiaâ&#x20AC;&#x2122;s first official world champion â&#x20AC;&#x201C; won at Manly 17 May 1964 - Farrelly dragged surfing into the public view and influenced the next generation of surfers who set about establishing an industry that brought the necessary equipment within reach of anyone who wanted to tackle the waves. The founders of the two biggest surfing product outlets on the peninsula acknowledge Farrellyâ&#x20AC;&#x2122;s influence: Paul and Phil Trigger, of Triggers Bros and Ted Bainbridge of Peninsula Surf. Bainbridge, who in 1974 started what became a chain of shops operating under the Peninsula Surf banner, remembers the mid-1960s weekly Midget Farrelly show on ABC TV. Farrellyâ&#x20AC;&#x2122;s â&#x20AC;&#x153;personable mannerâ&#x20AC;? came through the TV screen to the young lad growing up in Noble Park.

Donâ&#x20AC;&#x2122;t have time? Why not play 9? Play 9 holes on our Open Course for just $40 including cart.** *Card will be issued at the golf shop upon ďŹ rst round played. **Tee time restrictions apply *Terms and conditions apply, excludes Public Holidays, must quote deal at time of booking Peter Thomson Drive, Fingal 3939

with certain TOP-UP hearing aids incorporating the latest generation technology FREE OF CHARGE until the END OF SEPTEMBER The choice is yours, either a discreet deep canal aid or a miniature receiver in canal aid. In both cases the aids will be small and discreet, and programmed to \RXUVSHFLÂżFKHDULQJOHYHOVDQG unique personal needs. www.hiddenhearing.com.au