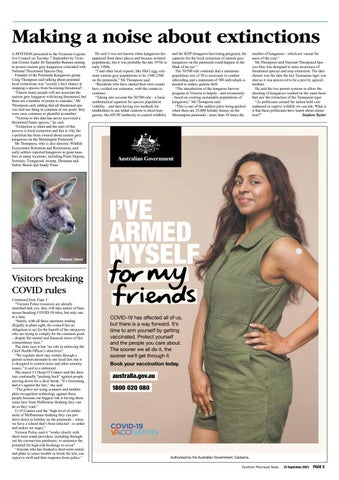 Making a noise about extinctions A PETITION presented to the Victorian Legislative Council on Tuesday 7 September by Victorian Greens leader Dr Samantha Ratnam aiming to protect eastern grey kangaroos coincided with National Threatened Species Day. Founder of the Peninsula Kangaroos group Craig Thompson said talking about potential local extinctions was “society’s best chance at stopping a species from becoming threatened”. “I know many people will not associate the eastern grey kangaroo with being threatened, but there are a number of points to consider,” Mr Thompson said, adding that all threatened species had one thing in common at one point: they were once common or plentiful in number. “Victoria to this date has never recovered a threatened fauna species,” he said. “Extinction is silent and the start of this process is local extinction and this is why the e-petition has been created about eastern grey kangaroos on the Mornington Peninsula.” Mr Thompson, who is also director, Wildlife Ecosystems Retention and Restoration, said early settlers reported kangaroos in great numbers at many locations, including Point Nepean, Sorrento, Tootgarook swamp, Dromana and Safety Beach and Sandy Point.

He said it was not known when kangaroos disappeared from these places and became isolated populations, but it was probably the late 1970s to early 1980s. “I and other local experts, like Mal Legg, estimate eastern grey populations to be 1500-2500 on the peninsula,” Mr Thompson said. “Residents who have started their own counts have verified our estimates, with the counts to continue. “Taking into account the 50/500 rule – a basic mathematical equation for species population viability – and then having two methods for landholders to use lethal controls to shoot kangaroos, the ATCW (authority to control wildlife)

and the KHP (kangaroo harvesting program), the capacity for the local extinction of eastern grey kangaroos on the peninsula could happen in the blink of an eye.” The 50/500 rule contends that a minimum population size of 50 is necessary to combat inbreeding and a minimum of 500 individuals is needed to reduce genetic drift. “The introduction of the kangaroo harvest program in Victoria is largely - and erroneously - based on creating sustainable populations of kangaroos,” Mr Thompson said. “This is one of the saddest jokes being pushed when there are 25,000 holiday homes on the Mornington peninsula - more than 10 times the

number of kangaroos - which are vacant for most of the year.” Mr Thompson said National Threatened Species Day was designed to raise awareness of threatened species and stop extinction. The date chosen was the date the last Tasmanian tiger was shot as it was perceived to be a pest by agriculturalists. He said the two permit systems to allow the shooting of kangaroos worked on the same basis that saw the extinction of the Tasmanian tiger. “As politicians around the nation hold cute orphaned or captive wildlife we can ask: What is it that these politicians have learnt about extinction?” Stephen Taylor

Visitors breaking COVID rules Continued from Page 1 “Victoria Police resources are already stretched and, yes, they will take names of businesses breaking COVID-19 rules, but only one at a time. “Surely, with all these operators trading illegally in plain sight, the council has an obligation to act for the benefit of the ratepayers who are trying to comply for the common good – despite the mental and financial stress of this extraordinary time.” The shire says it has “no role in enforcing the Chief Health Officer’s directives”. “We regulate short stay rentals through a permit system pursuant to our local law, but it is designed to control noise and other amenity issues,” it said in a statement. The mayor Cr Despi O’Connor said the shire was continually “pushing back” against people moving down for a short break. “It’s frustrating and it’s against the law,” she said. “The police are using scanners and number plate recognition technology against these people because our biggest risk is having them come here from Melbourne thinking they can do as they want.” Cr O’Connor said the “high level of entitlement of Melburnians thinking they can just drive down to holiday on the peninsula – when we have a school that’s been infected – is unfair and makes me angry.” Victoria Police said it “works closely with short-term rental providers, including throughout the coronavirus pandemic, to minimise the potential for high-risk bookings to occur”. “Anyone who has booked a short-term rental, and plans to cause trouble or break the law, can expect a swift and firm response from police.”

COVID-19 has affected all of us, but there is a way forward. It’s time to arm yourself by getting vaccinated. Protect yourself and the people you care about. The sooner we all do it, the sooner we’ll get through it. Book your vaccination today.